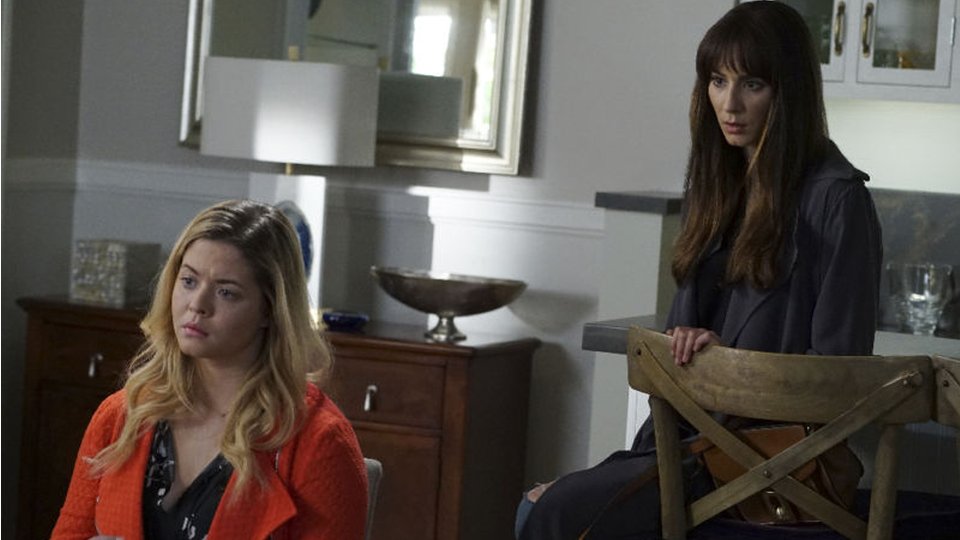 If you’re going to bury someone, make sure they’re really dead. That’s the take away from this week’s episode of Pretty Little Liars.

If you haven’t seen the latest episode of Pretty Little Liars and want to avoid spoilers we suggest you stop reading now. If you have seen it and want to relive the action keep reading.

Filling in the blanks

Everyone had questions for Mary Drake (Andrea Drake) this week as the shape-shifting shady lady continued to prove mysterious. Spencer (Troian Bellisario) headed to the Lost Woods resort to do some digging around about Archer/Rollins (Huw Collins) but was greeted by Mary who had changed all the locks on the motel room doors. Agitated Mary claimed she was frightened of what Archer may do to her and was busily packing up items from the room. When the two women heard a noise outside, Spencer went out to investigate but there was no on there.

Alison (Sasha Pieterse) was next with her questions and Mary returned to the house to find Ali had ransacked her belongings. Determined to prove her innocence Mary claimed she had no idea that Charlotte (Vanessa Ray) had called herself CeCe Drake and pointed the finger at Ali’s mother for taking everything from her.

Meanwhile Ali confronted her friends about turning her in and Spencer went to great lengths to explain why they did what they did. Emily (Shay Mitchell) also tried to explain their actions and it seems she’s healed the rift for the moment.

Emily decided to keep her eye on Jenna (Tammin Sursok) and Sara (Dre Davis) this week using her job at The Radley as a convenient way to spy on them. When Jenna ordered drinks, Emily jumped at the chance to deliver them. While in Jenna’s room she snooped on her laptop and found a folder labelled ‘Charlotte DiLaurentis’ but was caught by Sara. With her identity known to Jenna, Emily tried to get answers by threatening to turn Jenna in to the police.

In a rare moment of honest Jenna admitted that she had reached out to Charlotte and the two had become friends. She also revealed that Charlotte knew that Elliott was really Archer and that she had helped them be together to protect Charlotte. Emily was then rushed out of the room by Sara who tried to tell her she cared about her and was protecting her but Jenna cut the conversation short by calling Sara back.

Back from the dead

Detective Fury (Nicholas Gonzalez) visited Ali to talk about the sightings of Archer and shared his theory that Archer was very much still in town and using his credit card transactions to throw everyone off the trail.

Hanna (Ashley Benson) was convinced that Archer was still alive but her friends assured her that he was definitely dead. After gong through her business plan on the phone with Lucas (Brendan Robinson), Hanna answered a call to Archer’s burner phone and he was speaking on the other end telling her that she should make sure a person is dead before she buries them. Hanna told Aria (Lucy Hale) about the call but Aria explained it away as an attempt by Uber A to fool them into thinking Archer was still alive. Hanna wanted to go to the police but Aria talked her out of it and the two were spotted outside Rosewood P.D. by a mysterious police office in a car.

Turns out that mysterious police officer was in disguise and he/she managed to get close to Ali. When Spencer and Hanna realised that someone was coming after Ali, they tipped her off and she invited the police officer into the house for protection unaware that he was a threat to her. A fight broke out but they were interrupted by the police and Ali was left with part of a latex mask in her hands.

Determined to find out if Archer was dead or alive, Spencer and Hanna went to the woods to the spot where they buried him. After digging for a while they found Archer’s body where they left it. Who is it that’s after them?

Aria decided to not answer Ezra’s (Ian Harding) proposal and instead asked for time, which created an awkward tension between them. Seeking advice from Emily, Aria decided to tell Ezra about Archer and what she and the girls had done. Interestingly she didn’t throw in the call from Nicole (Rebecca Breeds) while she was on an honesty streak. After taking in what Aria said, Ezra got down on one knee again and Aria accepted his proposal.

Where do broken hearts go?

Caleb (Tyler Blackburn) returned to town and admitted to Spencer that he was confused about his feelings for Hanna. Spencer decided to finally break things off with him and encouraged Hanna to go and see him. Could we see a Haleb reunion? Speaking of Hanna she came clean about breaking off her engagement to Jordan (David Coussins).

Another one bites the dust

Sara Harvey’s day went from bad to worse. After being silenced by Jenna, she tried to pack her bags and flee but was killed by Uber A before she got chance. A maid found her dead in the bath in her room at The Radley.

Pretty Little Liars continues Tuesday 8/7c on Freeform in the US and Wednesday on Netflix in the UK. Watch the promo for next episode Original G’A’ngsters below: