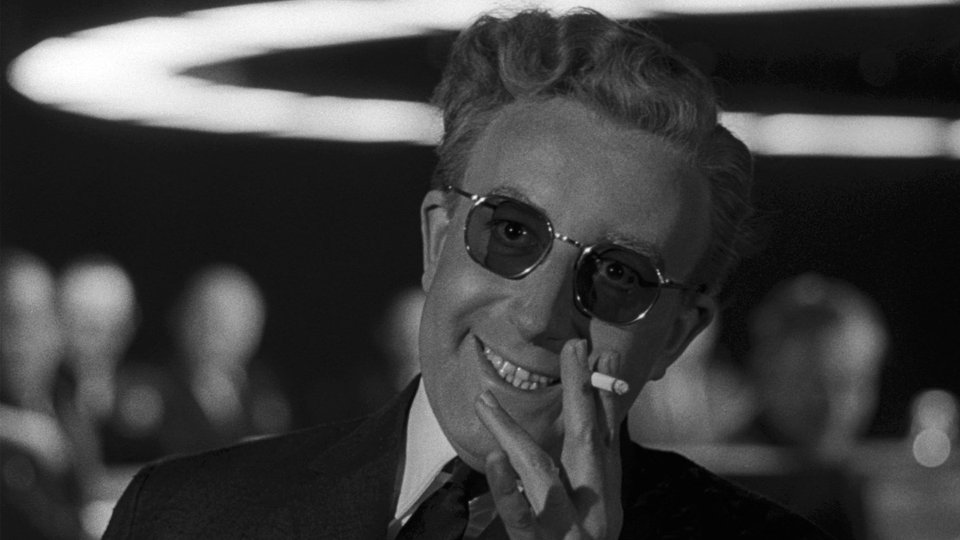 The Stanley Kubrick: Visionary Filmmaker blu-ray box set is a wonderful thing, and a great addition to any collection, apart from one sickening omission. It does not contain Dr. Strangelove or: How I Learned to Stop Worrying and Love the Bomb, Kubrick’s hilarious and harrowing Cold War satire of the atomic age. Fortunately, that sub standard DVD edition you were forced to buy instead can now be tossed aside and replaced with this definitive release from the good people at Criterion.

This is a phenomenal edition of the film, beautifully restored in digital 4K. There are brand new interviews produced by Criterion with Kubrick scholars Mick Broderick and Rodney Hill; archivist Richard Daniels; cinematographer and camera innovator Joe Dunton; camera operator Kelvin Pike; and David George, son of Peter George, on whose novel Red Alert, the film is based.

The disc also has excerpts from a 1965 audio interview with Kubrick. There are four short documentaries about the making of the film, the socio-political climate of the period, the work of Peter Sellers, and the artistry of Kubrick. Contributors to these documentaries include Roger Ebert, Shirley MacLaine, Bob Woodward, and James Earl Jones.

We are also treated to on set interviews from 1963 with George C. Scott and Peter Sellers, as well as an excerpt from a 1980 interview with Sellers taken from an episode of The Today Show. Finally, there are two trailers, an essay by scholar David Bromwich, and an article by screenwriter Terry Southern on the making of the film.

Sometimes, when the film is a masterpiece, it is enough for the disc to be vanilla. Dr. Strangelove is a bona fide masterpiece. To have these additional features on the disc too, we are truly being spoiled. Make no mistake, this is an absolute must-buy for any discerning film fan.

The film itself is a work of collaborative genius, with Kubrick at the helm of a cast and crew all at the top of their game. The plot sees the rogue (and slightly psychotic) General Jack D. Ripper (Sterling Hayden) circumvent all security protocols in order to launch a nuclear attack against Russia. Ordinarily, this would be the basis for a political thriller, but working from an incredible screenplay that he co-wrote with Terry Southern, Kubrick crafts a dizzying and surreal comedy.

The action moves between only a few sets, including the office of General Ripper, the cockpit of the B-52 bomber on its way to deliver the payload, and the War Room – perhaps the most famous and instantly recognisable set in cinema history. Designed by Ken Adam, it is an absolute triumph, and plays host to some of the great moments of the film. “Gentlemen! You can’t fight in here. This is the War Room!”

At the centre of the film is the genius of Peter Sellers, in perhaps the greatest performance, or should that be performances, of his career. Playing three distinctive roles – RAF Captain Lionel Mandrake, the officer caught in the midst of General Ripper’s madness – US President Merkin Muffley, the ineffectual leader trying to placate the furious, drunk Soviet premier – and finally, the eponymous Dr. Strangelove, the wheelchair bound former Nazi scientist, now working as a top Pentagon adviser.

Sellers’ performance as Strangelove is one of the most extraordinary examples of physical comedy ever committed to celluloid. With his black-gloved ‘alien’ right hand acting of its own free will, prone to Nazi salutes, and even attacking Strangelove himself. No matter how many times I see this film it always has me in tears of laughter. The sight of character actor Peter Bull struggling to keep a straight face whilst Sellers struggles with his rogue hand, has always been one of my favourite moments in the film. Knowing what a perfectionist Kubrick is, the fact that this scene made it into the final film, with Bull corpsing in the background, reveals how funny it must have been on set.

However, Sellers isn’t the only actor doing great work in this film. Down there in the War Room with him, is General Buck Turgidson, played fantastically by George C Scott. A nervous bundle of twitches and rubber-faced expressions, his Communist hating General is an iconic comic creation. Like everyone in the War Room, he is afraid of the potential global annihilation that is about to be unleashed, yet a part of him is really quite enthusiastic about the damn Ruskies getting bombed first.

This is a timely film to be watching right now, in the week that Britain committed to spending billions on it’s own nuclear failsafe. In 1964, Stanley Kubrick knew that the entire notion of nuclear deterrence was a joke. He turned that joke into one of the greatest films ever made. Who knew that mutually assured destruction could be so funny?