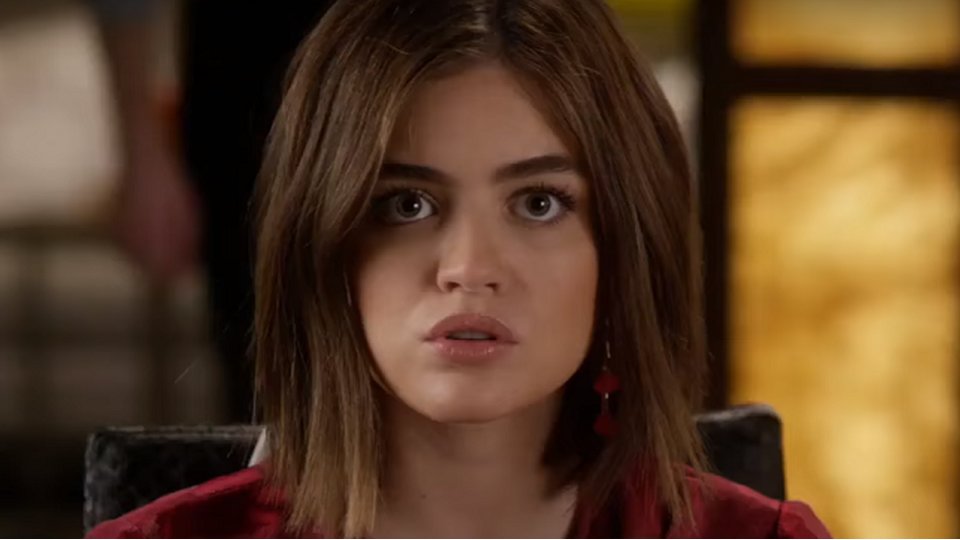 The PLLs had to pull together to cover up their mess on this week’s episode of Pretty Little Liars.

If you haven’t seen the latest episode of Pretty Little Liars and want to avoid spoilers, we suggest you stop reading now. If you have seen it and want to relive all of the action then keep reading.

Spencer (Troian Bellisario), Emily (Shay Mitchell) and Aria (Lucy Hale) quickly set about covering their tracks in the wake of Hanna (Ashley Benson) running over and killing Dr. Rollins (Huw Collins). As Hanna sat in the car stunned and Ali (Sasha Pieterse) tried to process what had just happened, the other three girls quickly buried the body and hatched a plan to cover their tracks. Hanna eventually joined in to help her friends and Ali removed Rollins’ security pass so they could use it to get back into the hospital.

Back to the asylum

Aria’s part in the cover up was to get Ali back into the hospital before anyone noticed that she was gone. Using Rollins’ security pass, she helped Ali sneak back into the hospital but was worried when Ali suddenly went missing. Aria managed to find her cowering in a stairwell, worried that she was going to have to stay in the hospital. Aria promised her that she would get her out but reinforced the importance of Ali returning to her bed where she was shackled so as not to arouse any suspicions.

Before she left her, Aria asked Ali if she killed Charlotte (Vanessa Ray) and Ali told her she didn’t. She explained that she had followed Charlotte to the church after the two had argued over Rollins. The last time Ali saw Charlotte she was in the bell tower alive.

Later in the episode Mary Drake (Andrea Parker) visited Alison and told her that she would take care of her now.

Spencer took Emily and Hanna back to her house. As Hanna showered, Spencer scrubbed the floor to erase all trace of the mud that they’d brought into the house. Emily left for work and Spencer and Hanna had an awkward moment alone together before being interrupted by Caleb (Tyler Blackburn). Spencer refused to let him in and he told Spencer he did love her and recounted a story of a night they spent together. Hanna cried as she overheard everything and Spencer also wept as she tried to deal with the pain of Caleb’s betrayal. She eventually got him to leave and told him she needed more time.

Heading to The Radley, Spencer had a drink while Emily worked the bar as they waited for Aria to contact them. Her part of the plan was to plant Rollins’ phone and jacket on a train while Emily packed a bag of his stuff to make it look like he’d left town. Spencer got carried away when she met a mysterious man (Nicholas Gonzalez) at the bar who bought her a drink. As Spencer drank more, she forgot her part of the cover up plan and almost ended up hooking up with the guy after a steamy encounter in the lift.

Emily had gone home after her shift and received a call from a drunk Spencer. She went to collect her and confronted Spencer for being irresponsible and almost ruining their plan.

Hanna and Aria headed back to the woods to destroy Lucas’ (Brendan Robinson) car but were surprised to find it had disappeared. After a brief panic, the car returned with Mona (Janel Parrish) in the driver’s seat and she explained she was helping by getting the car patched up so no one knew anything had happened.

As the PLLs and Mona tried to return to normal, they enjoyed a breakfast at The Radley. Things soon turned sour when Jenna (Tammin Sursok) walked in and greeted the girls. She claimed to be in town for Toby’s (Keegan Allen) engagement but that later proved to be false when Toby was less than pleased to see her.

Tensions were high with Spencer and Hanna being awkward around one another. Hanna told Spencer to go find Caleb and tell him what had happened the night before. When Spencer returned home Caleb was already gone.

Mona stayed with Hanna and the girls tried to locate Rollins’ burner phone without success. They shared a moment of bonding, rekindling their former friendship. Hanna came clean about breaking up with Jordan (David Coussins) and then noticed that the bracelet she was wearing when they moved Rollins’ car had disappeared. Accompanied by Mona they went to Rollins’ car at the train station, broke in and found the bracelet. As they walked away they heard a phone ring and located it hidden in the well of the passenger seat. Mona answered the call and it was Jenna on the other end referring to Rollins as Archer.

Emily and Aria went to visit Ali in hospital and found police everywhere. Toby had discovered that Rollins’ wasn’t who he claimed to be and that he’d taken the identity of a deceased man. The PLLs kept quiet about murdering him while Toby assured them he’d bring Rollins’ to justice and find out what was really going on.

Pretty Little Liars continues at 8/7c Tuesday on Freeform in the US and Wednesday on Netflix in the UK. Preview the next episode Along Comes Mary below: