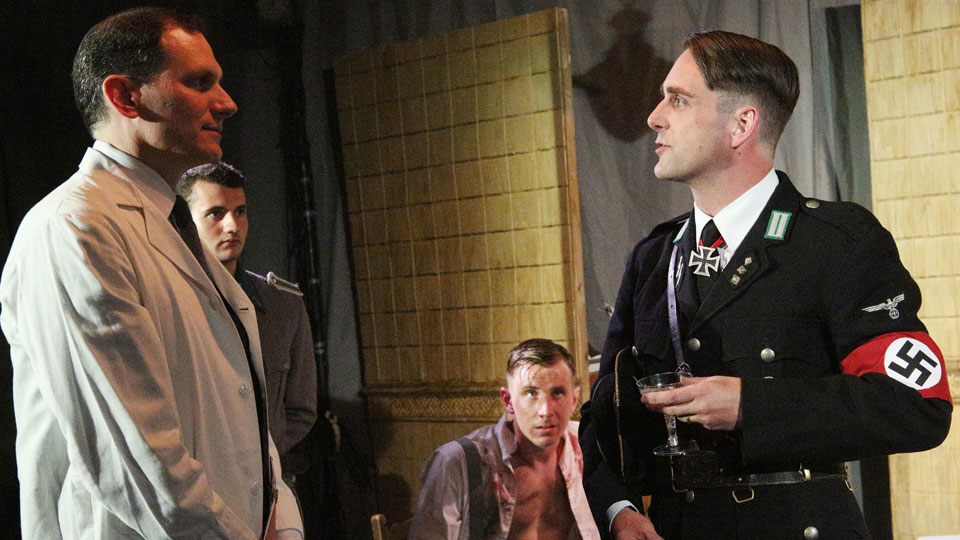 Savage is a piece of new writing that examines an overlooked player in the long litany of Twentieth Century Nazis, and the shame that his name ought to bring, not just on Germany, but on Great Britain and Denmark, who encouraged his work and allowed him to flee to South America after the war.

The name Dr Carl Peter Vaernet hardly rings with infamy, perhaps because he lacked the pure sadism of the likes of Josef Mengele, yet the Danish GP would end up in Buchenwald concentration camp trying experimental “cures” for homosexuality on the prisoners there.

Claudio Macor’s play quite sensibly adds Vaernet’s experimentation around the core of a love story that sees young Dane, Nikolai (Alexander Huetson) torn apart from his American boyfriend Zack (Nic Kyle). Whilst Zack’s work at the American Embassy gives him diplomatic immunity from the brutal regime of the occupying Nazis in Copenhagen, Nikolai has no such luck, and he becomes one of Vaernet’s first victims, leaving a desperate Zack searching for his lost love.

The power of the play lies in its neat nuances and contrasts. Whilst Nikolai and Zack represent a normal, loving gay relationship, there’s also represented the abusive relationship between conflicted SS Officer Heinrich (Bradley Clarkson) and his young male captive Georg (Lee Knight).

The message is strong: Nikolai’s concern that nobody will care about justice for homosexuals is poignantly true, in an era in which Alan Turing, one of Britain’s greatest scientists, suffered chemical castration that led to his suicide, because he was gay. The theme that justice is impossible, and that the only hope is human love and compassion, drives the narrative, and the story strands (for the most part) cleverly interweave. The penultimate scene, which explores the dramatic potential of this premise, is intense and moving, and brilliantly played by Alexander Huetson and Nic Kyle.

The performances are mostly excellent. Bradley Clarkson in particular is outstanding as Heinrich, and he gives a thrilling portrayal of a twisted, conflicted repressed homosexual caught up in Nazi ideology. He almost makes you feel sorry for an SS officer, but finds a way of injecting a touch of humour and a little compassion into the part. The central romance is well-played, though Alexander Huetson can afford to underplay it a touch more. Gary Fannin is suitably detached, aloof and self-righteous as Dr Vaernet. Commendably he plays Vaernet as a dogmatist rather than as an outright monster; alas, such homophobic sentiments still exist, usually spurred on by an accompanying supernatural ideology. We can’t afford to be sanguine – the parallels with contemporary societal concerns found in the play make sure we aren’t.

In a male-dominated ensemble, Emily Lynne is excellent as the solo female performer. Nurse Ilse Paulsen is an interesting character, and she neatly keeps us guessing about her trustworthiness until the evidence is in.

Savage is perhaps a touch too ambitious for the confines of the Above the Arts Theatre space. There are a lot of set and costume changes, which are handled with reasonable slickness, but a more technically-equipped theatre, with greater variance in lighting, would have added to the atmosphere. As a play, it’s a rough diamond, a touch over-written, with a few scenes taking too long as they circle around the point once too often, with some non-naturalistic dialogue jarring occasionally.

Despite these few misgivings, Savage is a thought-provoking take on a neglected historical subject. It’s clearly well-researched, but through that, Macor brings out the warmth and horror of a human drama, and juggles both effectively. Catch it whilst you can.