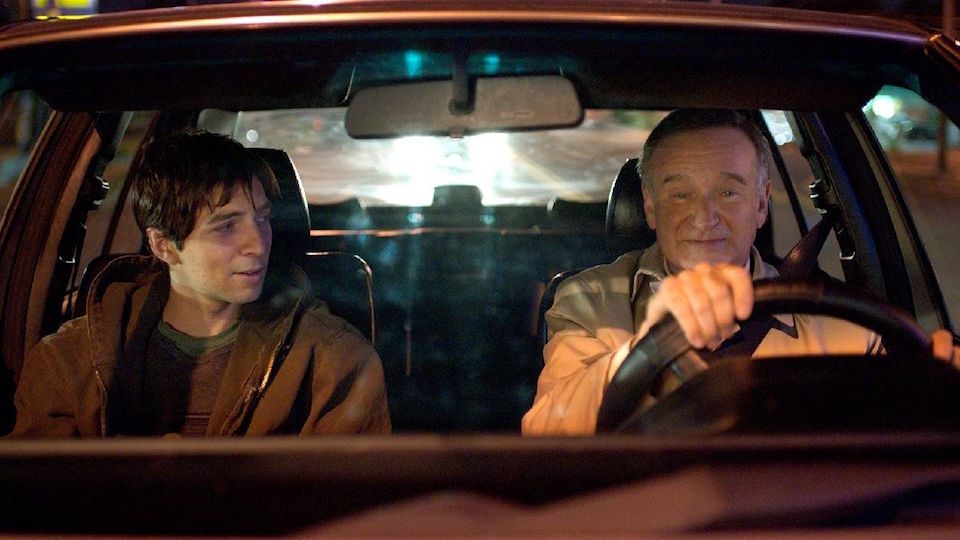 I hadn’t realised how much I missed Robin Williams until watching him here in his final on-screen appearance. He’ll always be remembered for his unpredictable, maverick comic genius, but in his dramatic roles he was able to tap into something truly extraordinary – a vein of melancholy that perhaps only a comedian could find.

In Boulevard, Williams stars as Nolan, a 60-year-old banker living a comfortable if humdrum life. His father is in a care home following a stroke. His wife Joy (Kathy Baker) sleeps in a separate room, an arrangement that appears to have been in place for some time. They still love each other, but their union is now merely a distraction from reality. One night on the way home from work, Nolan cruises the Boulevard – the red light district – and picks up a young hustler named Leo (Roberto Aguire). Nolan is gay. He has known he is gay for his entire life, but he has never done anything about it until now.

Williams’ performance as this sweet, middle-aged man is desperately sad. His body language is hunched and introverted. His eyes are completely void of life. He meets with Leo at a motel, but not for sex. He just wants someone to talk to, without the pressure of maintaining a facade that has walled up his entire life. His conversations with Leo aren’t interesting or revelatory in any way. Leo himself barely speaks, confused as to why this old man doesn’t want sex but keeps on paying him.

Nolan starts spending more time with Leo, and communicating with him by text. In doing so, the comfortable life that has hidden his sexuality for all these years starts to crumble. He gets caught in a lie. His boss from the bank sees him with Leo. There is a violent encounter with Leo’s pimp, leaving Nolan with a black eye and more lies to tell.

Kathy Baker is superb as Joy. As Nolan tentatively starts living a life that is true to himself, Joy also begins to confront a truth that she has perhaps always known. When she catches him lying about where he supposedly was until all hours, she doesn’t confront him. She too has been living a lie, and it is one she can’t bear to face.

It is unfortunate however, that like it’s lead characters, Boulevard lacks bravery in both the writing and direction. It doesn’t fully explore the new world that Nolan is opening himself up to, or the old world of convenience and repressed emotion that led him to this point in his life. There are moments of truth and emotional catharsis existing at the edge of the frame, and the film allows them to just float on by.

With a truer script and bolder direction this could have been a fitting epitaph for Williams. It is a real shame, because at its heart, this film has one of the most real and affecting portrayals of regret an actor has ever given.