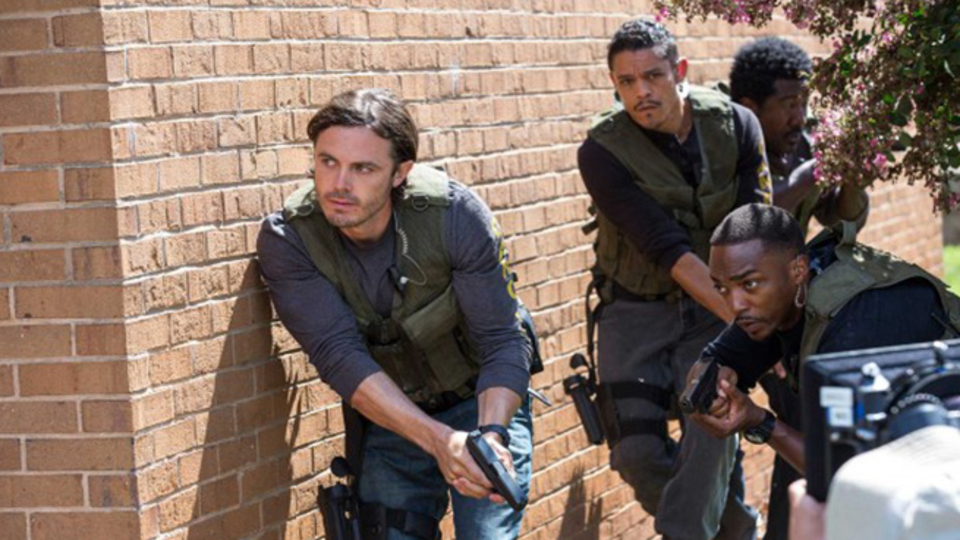 The heist drama has always been a stalwart of Hollywood, but in John Hillcoat’s electrifying Triple 9, it takes on a fresh new edge. The concept is deceptively simple, with a group of crooked cops and criminals all finding themselves owing the wrong people a big favour. Cue an impossible mission, only made possible by creating a big enough distraction elsewhere in the city. In this case it’s a ‘Triple 9’ – the police code for an officer down.

The Russian mob who are orchestrating this whole thing are led by a frighteningly-convincing Kate Winslet as Irina Vlaslov. She’s all about ostentatious fashion sense, bling and big hair, but also a woman who has willingly taken over the reins of her husband’s crime syndicate whilst he pulls the strings in jail. Winslet clearly relishes this opportunity to play against type here, giving what could have been a clichéd villain actual substance and cause. She’s a nasty piece of work too so it’s refreshing to see a female antagonist handled so well.

The crew in question are led by Terrell Tompkins (Chiwetel Ejiofor).There’s wheelman Russel Welch, (the always reliable Norman Reedus) and his junkie brother Gabe (Aaron Paul, who’s finally starting to get some decent roles). The hugely underrated Clifton Collins Jr. plays Jorge Rodriguez, a driven cop with no moral compass and Anthony Mackie is Marcus Atwood, a boisterous young detective played with suitable verve. The inner cliques within their band of unmerry men create some interesting dynamics (the ex-army boys stick together, as do the detectives – each with their own agendas to push).

Tompkins has a son with Gal Gadot’s Elena, the pretty but vacuous younger sister of Irina. Their child is used as a pawn by Irina to get his crew to work off a seemingly endless debt. The severity of the situation is something which fuels every scene with genuine surprise and tension. It’s a great premise and one that lends itself to this genre exceptionally well. Again, Winslet shines here, knocking heads against Ejiofor’s career-criminal to create some memorable dialogue exchanges.

On the flipside of all this crime is green detective Chris Allen (Casey Affleck), new to the precinct and partnered up with Marcus Atwood, much to his dismay. With a strong code of conduct and a real desire to do what’s right, it sets up the film’s central good vs. bad plot very well. Tensions mount between the new partners as Allen gets caught in the middle. His Uncle is Sergeant Detective Jeffrey Allen, (played by the peerless Woody Harrelson), also on the force and chasing down the perpetrators of the various heists committed by Tompkins crew. This family connection creates a brilliant dynamic as Affleck and Harrelson draw ever closer to conflict with Ejiofor’s gang.

As the film moves to its inevitable conclusion, the action takes centre-stage and it’s fantastically paced. Director John Hillcoat has a keen eye for spectacle, with the opening bank heist sharing similarities in set-up to Michael Mann’s Heat and Christopher Nolan’s The Dark Knight. But even though the action is immersive, the characterisation always takes priority. Atlanta also plays a starring role, giving Hillcoat a brilliant canvas to tell his crime-laden tale in, with scenery that fits in with the violence of the plot.

If there are negatives, it’s that Triple 9 is a tad predictable in places. Teresa Palmer is also wasted as Affleck’s understanding wife and deserved a much more substantial role. But these are minor gripes in an otherwise solid set-up that delivers a very enjoyable urban thriller. With palpable tension and a real sense of imminent danger running throughout, Triple 9 is one of the best thrillers of the year. The solid all-star cast helps to deliver a very memorable drama that delivers spectacle, looks stylish and keeps you thoroughly hooked throughout.