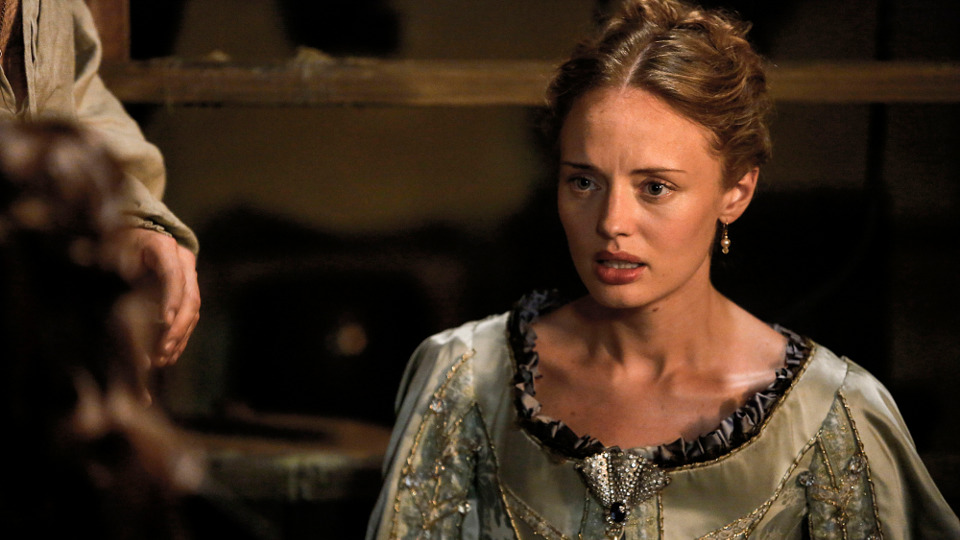 In the third episode of The Musketeers, King Louis (Ryan Gage) tasked them with bringing his brother Gaston (Andre Flynn), the Duke of Orleans, back to Paris. Everyone was confused as to why as he was exiled for trying to overthrow the King.

The musketeers obliged but ran into problems on the way back when Gaston fell from his horse. They took him into the nearest tavern for aid but inside he had his wallet stolen. He soon realised and demanded his money back which started a fight where he killed three war veterans.

Despite Gaston’s actions The musketeers had no choice but to defend him as he is the King’s brother. This angered Christophe (Richard Dormer) who was the leader of the veterans. Athos apologised and gave his word that they would take Gaston away and not return. Sylvie (Thalissa Teixeira) was also present in the tavern and vouched for Athos.

At the palace Gaston still demanded his wallet be returned and the King tasked The musketeers with bringing the thief to justice. The wallet had been stolen by Josephine (Lisa McGrillis), the wife of Christophe. She sent word to The musketeers that it would be returned after the funeral of the men Gaston killed.

They attended the funeral but before it ended the Red Guard arrived. Captain Marcheaux (Matt Stokoe) said everyone was to be taken away to be flogged until the thief was found. The veterans were angry and when they protested one of them was shot.

Minister Treville (Huge Speer) arrived and ordered Marcheaux to leave. He then went to see King Louis and warned him that violence against the veterans was a bad idea. He decided to talk to them himself.

Before Treville left Louis explained some things to him. He had contracted the White Plague (Tuberculosis) leaving him only months to live. He planned to spend as much time as he could with the Dauphin and had brought Gaston back to help his son remember him when he died. He told Treville he was a dear friend but that if he told anyone about his illness he would see him hanged. What neither of them noticed was that Feron (Rupert Everett) was listening in on their conversation and will surely try to use the information in a future episode.

Treville took Porthos (Howard Charles) with him to see Christope but they found themselves captured. Christope wanted to use them to blackmail the King.

The King wanted to send the Red Guard to slaughter the veterans but Athos managed to get permission to attempt a rescue mission. He organised a gun battle as a distraction and sent Aramis and D’Artagnan (Luke Pasqualino) underground to rescue them via the basement. They got inside and freed Treville and Porthos but their escape was blocked when Grimaud (Matthew McNulty) blew up their escape route.

The explosion was the signal for the Red Guard to attack. This resulted in the veterans and musketeers joining forces to fight back. They also received extra help from Sylvie and the refugees as well as Constance (Tamla Kari) and the Garrison. Marcheaux was punched in the face by Treville and sent packing. Sadly Josephine suffered a gunshot wound in the battle and died in Christophe’s arms.

Elsewhere in the episode Queen Anne (Alexandra Dowling) was briefly reunited with Aramis (Santiago Cabrera). He was pleased to see her but she sent him away.

At the end of the episode Gaston found himself locked up in the Bastille on order of the King. Feron came to visit him and they threatened each other.

The next episode is The Queen’s Diamonds. The future of the English monarchy rests on the musketeers’ shoulders after Louis orders them to recover the Queen of England’s missing crown jewels. It’s a daunting mission, made more complicated when they unmask the thief. Fighting every instinct, the musketeers must place their faith in an old adversary to hunt down the diamonds. The ensuing mayhem tests each of their loyalties to the limit, and a surprise reunion results in heartbreak for Aramis. Meanwhile, Feron seizes an opportunity to avoid personal scandal.

Tune into BBC One at 8:30pm on Saturday to watch the episode. Preview episode 4 with our gallery below: