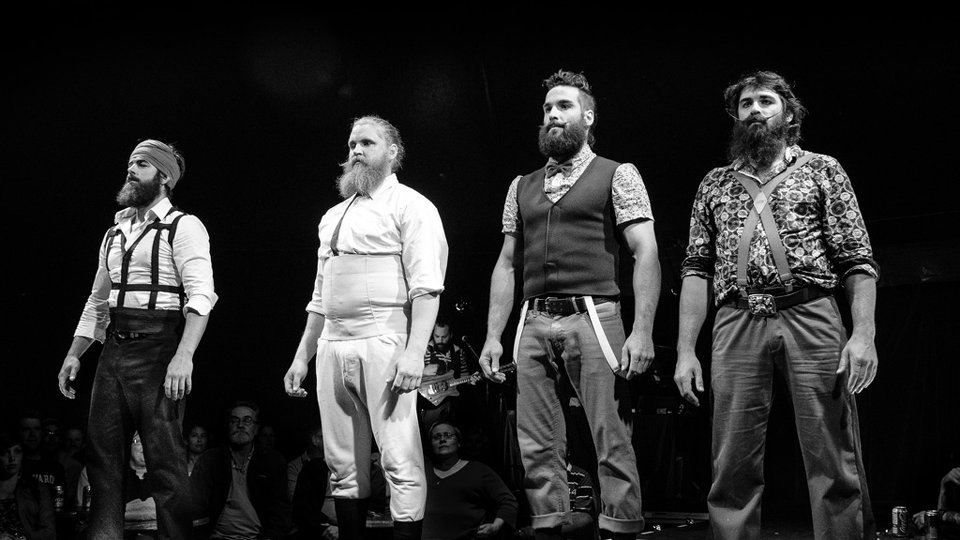 Cirque Alfonse first made its mark on London’s Southbank with well-received stylised show Timber, and now comes back with Barbu, an eccentric and quirky love letter to the history of circus.

Barbu showcases classic circus acts such as trapeze and juggling, with a twist. This is not your normal Zippo Circus. The show opens with an increasingly daring roller-skate routine, which makes full use of the limited staging. It’s not everyday you see four men pulling each other around on eight wheels by their (rather impressive) beards.

The audience is then treated to some flexible aerial work, nail-biting gymnastics and impressive juggling. But the night really comes to life when one of the bearded performers arrives on stage dressed as a disco ball and works the stage with a hoop, quite unlike anything we’ve ever seen. From this moment on, the night descends into controlled chaos, with the audience fully warmed up to the increasingly death-defying routines taking place on stage. The acts get increasingly more, er, naked too, with male genitalia flying every which way.

The multi-talented performers really are at the top of their game, excelling at every circus discipline you can throw at them. The energy is relentless and infectious too, with the audience swept up by the on-stage action, which is sound-tracked by a bizarre folk/electropop band which works far better than you might think. In fact, the band seriously elevates the production and is just as vital to the impressive work on-stage.

The spiegeltent is the perfect venue for the production, with it’s old-school stylings and raucous atmosphere bringing the show to life. Barbu is an adult night at the circus, full of humour, talent and more beards than you can expect to see on a Saturday night in Shoreditch. Bravo!