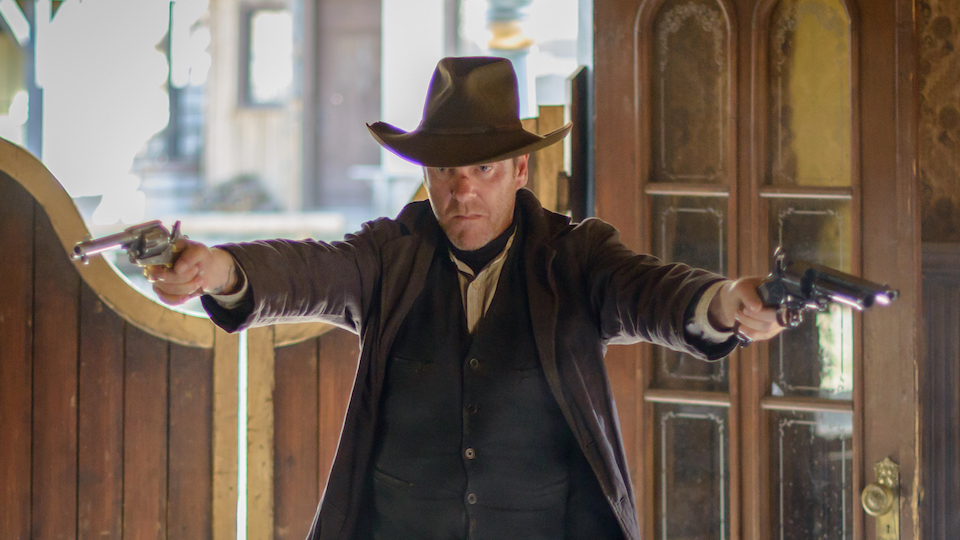 Kiefer Sutherland reteams with fellow 24 alumni Jon Cassar for this enjoyable old-fashioned western. Back in the old west for the first time since Young Guns 2, Kiefer plays John Henry Clayton, a civil war veteran with a reputation as a deadly gunslinger. He returns home to his father, the local reverend (played by his real life father Donald Sutherland) looking for a chance at a new start, a quiet life working the fields, where he can use the earth to sweat out all his guilt and anger.

Sure enough though, there are those who won’t let poor old John Henry live a quiet life. His mere presence in town is enough to get sinister landowner James McCurdy (Brian Cox) and his retinue of thugs all wound up. What if he decides to pick up his six-shooter again and take the side of the poor farmers whose land we are stealing?

Yep, you couldn’t have a formulaic setup to a Western if this had been released in the 50s during the golden age of the genre. But despite the predictability, Forsaken is played with such earnestness I found it impossible to resist. There is no subversion of the genre or attempt to rework it into something it is not. It is simply a gentle tale of a man looking for forgiveness, shot through with lush, glowing cinematography and a stirringly romantic score. It may be set in Wyoming, but this could not be any further from Tarantino’s The Hateful Eight.

The cast also includes Demi Moore, playing Mary-Alice, the girl that John Henry left behind. Michael Wincott provides the film’s stand-out turn however, as “Gentleman” Dave Turner, a sophisticated and educated man, whose manner of speaking and gentle courtesies belie his swiftness with a gun, and dead-eyed murdering nature. He has been hired by Brian Cox’s McCurdy to lead his band of land-rustling cowpokes. Cox himself delivers an entertaining and cartoony performance, channelling Al Swearengen with his frequent cursing and f-bombs.

To not know where this is all heading would suggest that you’ve either never seen a western before, or perhaps never seen a film before. John Henry does everything in his power to turn the other cheek. That part of his life is over. He just wants to repair his relationship with his father and be left in peace. But if you kick a dog long enough you know it’s eventually going to bite…and these idiots sure do kick ol’ John Henry. They debase him and humiliate him. Quite why they think this is a good plan is beyond me, but hey, they’re bad dudes not clever dudes, and this is an archetypal tale. Certain things need to happen. The pressure has to build before the inevitable explosion.

This won’t be to everyone’s taste, especially those raised on the revisionist westerns of the 21st century. But if you prefer something a little more classically put together, the Forsaken could well be the film for you.