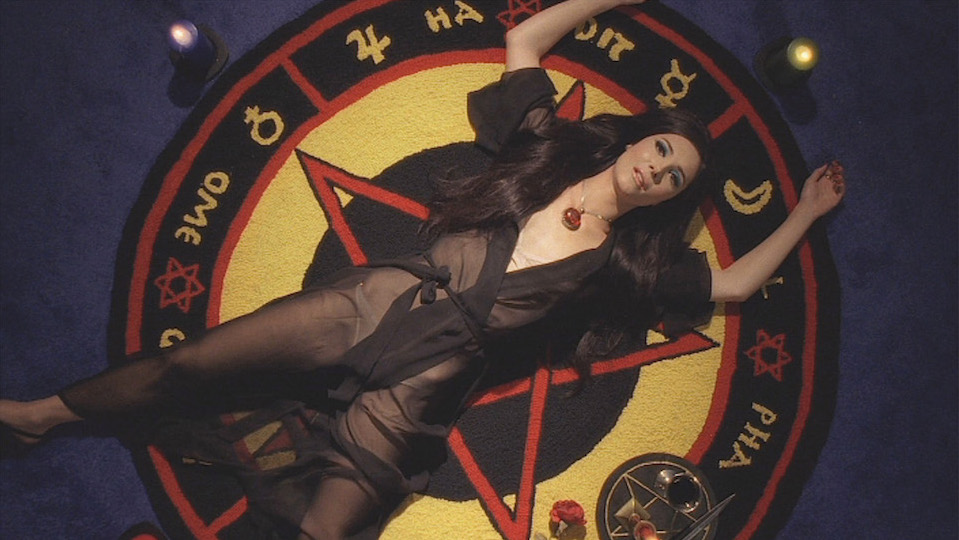 One of the stand-out films in the Night Moves strand at this years Edinburgh International Film Festival is The Love Witch – a visually stunning sexploitation thriller. A glorious tribute to the Technicolor movies of the 1960s, made using vintage techniques and in-camera effects.

The film’s director, Anna Biller is in Edinburgh to promote the film. Entertainment Focus caught up with her to discuss The Love Witch, what inspires her, and what the future holds for this supremely talented filmmaker.

Read the EF review of The Love Witch here

How are you finding Edinburgh so far?

Is this your first Edinburgh Film festival?

Yes it is. It’s so magical here, very beautiful.

Congratulations on the film. I really loved it. It was a completely packed press screening this morning, and it really went down fantastically well.

Could you tell me where the idea initial came from, and what inspired you to make The Love Witch?

The ideas came from so many different places it’s hard to pick one. The first idea came from looking at a lot of pulp novels…the covers of pulp novels, and wanting to make a movie about a witch. And just a lot of experiences from my own life and being a young woman and (pauses) trying to examine relationships between men and women the way I have experienced. And how it is so different how men experience love compared to the way women experience love, which I don’t think is often talked about a lot in movies. I was reading a lot of books on gender, and these books would talk about “how to get your man back”, and I started reading about male psychology and I was very shocked at what I read, you know things like “don’t love too much”, and so I started to base my script on that concept. So I put it all together, literally all the nightmares and bad experiences (laughs). So that’s my problem, I just love too much, and it’s really toxic and really destructive and dangerous! (Laughs)

Was there a lot of research involved in the development of the script?

Could you tell me a bit about the casting process to find Elaine? And what was it about Samantha Robinson that made her the perfect witch?

Well my casting process was very traditional, I had a casting call and agents submitted their clients, and actors submitted themselves too. I saw hundreds of people. Samantha Robinson is a fairly unusual person, she’s very young and beautiful obviously, but she’s a very interesting actress. What really struck me about her aside from being just incredibly talented, especially for her age, is her way of collaborating. We developed the character together and I could see her openness when I first met her. She’s just really open. She also has a really interesting detached quality. A kind of star quality that she just naturally has. She’s very beautiful, very poised, very detached like all those past movie stars used to be…like Garbo. Young girls are normally very self-conscious, and she doesn’t have any of that. She’s very strong and that makes her naturally cinematic.

Had you considered taking the lead role yourself as you did in your previous film?

No I really didn’t, I wanted to be able to write a lot of dialogue, and have the character be really complicated, and there was so much to do as director. I was in my last film (Viva), but I wrote hardly any dialogue. I think it (the part of Elaine) was too difficult a role to direct and play.

Well yes, as well as director and writer, you also produced the film, designed the costumes, designed the sets and wrote the music!

This is the most ambitious movie I have ever made, so I knew I had to give up some things .

Speaking of the design, the aesthetic of the film is incredible. So distinctive and vibrant, and such a convincing recreation of that 60s Technicolor style. Could you tell me what inspired your love for that classic cinematic style of heightened reality?

Well I watch almost exclusively classic movies. It’s not just the look of them, it’s everything, the music, the art direction, and the way the performances used to be, and the way scenes are lit. Everything about those movies is very appealing to me, so I watched a lot of them. When I think of how the film looks, it’s through naturally drawing from all those past movies. I don’t think I was trying to be retro, it’s supposed to be set in modern day! I styled the lead character from the 60s on purpose, because she’s supposed to be this femme fatale, with the classic look, and the long lashes. She was only thing that was consciously retro.

Were there any specific films that you showed to the cast and crew to give them the feel you were looking for?

Well believe it or not, the only actress that I rehearsed was Samantha Robinson. We looked at a lot of movies together. The other actors just came in and gave me those performances. Because of the way the script was written, they got a sense and knew the style I wanted, so I didn’t really work with anyone else. But Samantha has a really complicated role, and I really wanted it to have an organic quality, so we watched a lot of films together, mainly classic films featuring psychopathic women! So we watched Leave Her to Heaven, Belle De Jour, Secret Ceremony, Angel Face. I tried to show her all these really great performances, so she could be inspired and take into herself. I wanted her to see that’s how big I wanted it.

How challenging is it to shoot on 35mm in an increasingly digital industry?

It’s pretty easy for me, because I’ve always shot on 35mm. I know the technique for working on film really well. The problem was finding a crew that are also familiar with the technique. The DP (director of photography) that I worked with on the film (M. David Mullen) is an absolute expert on classical film lighting. I interviewed a lot of people because he wasn’t available, literally dozens of very experienced DPs in Los Angeles and nobody actually knew anything about it. It’s a very specific lighting technique, and finally he became available, and that was wonderful! He knew all the tricks that they used to use to light faces and close ups. You have to artificially create shadows, because the room is so flooded with light. He’s an artist, it was a real pleasure to work with him.

As a proponent of 35mm, I assume it’s very important to you that actual film stock is preserved?

It is yes. I hope I can continue shooting on film. If I had to shoot digitally I would, but these are the techniques that I’ve spent years learning, and it really took me a long time to figure this stuff out. Now that I know how to do it, I want to continue doing it. Shooting digitally is a completely different technique, so I’d have to almost start from scratch. Film has different colour and contrast. These are all the things I know I’m going to get, and I’m very comfortable with it. You know, we also cut (The Love Witch) on the original negative. A lot of people still shoot on film, but nobody cuts on the original negative. I had no idea how obsolete that technique was. Nobody had done that literally in Los Angeles for about 7 years. There was no support for it. Yet I managed to do it, but I imagine in a couple of years there will not be single negative cutter in the whole world!

You strike me as someone in complete control of your art. Could you ever see yourself working in a more commercial environment, where you would have to cede some of that control? Television for example?

Oh absolutely. As I’ve gotten much more skilled as a filmmaker, I’ve got much more relaxed about all kinds of things. I think I’m a better writer now, and I think if I had a good script and good actors, I would be happy to shoot in any style. I think I understand those are the really key things. Getting the look right is obviously fantastic, if you’re making an art film and being an artist that way. But with great actors and a great script you know you can shoot anything. You can make something really interesting. I’d almost consider shooting in a much simpler style just to prove that, just to see if I could do something in a very simple style and still pull it off.

Are you continuing on the festival circuit from here, are there many more stops? Or are you already working on the next film?

We have quite a way to go with festivals for the next few months. I’m trying to write, but I’m not getting much time with all the festivals. So I’m just getting a little bit of writing done, not that much….but yeah, I’m looking towards the next project.

Any ideas on what that will be?

I always try to make movies that are like the movies I love. I realise that whenever a classic movie comes on TV about a psychopathic husband, you know I get very excited! (Laughs) I love movies like Caught, you know by Max Ophüls, or Gaslight, just these movies about very scary husbands! I think as a woman it’s your worst fear in life that end up getting married to some animal. And I love those kind of stories. I started adapting the book that Hitchcock’s Suspicion was based on (Before the Fact by Frances Iles), which is a lot darker and more terrifying than the movie, so I started that script, and I may do that.