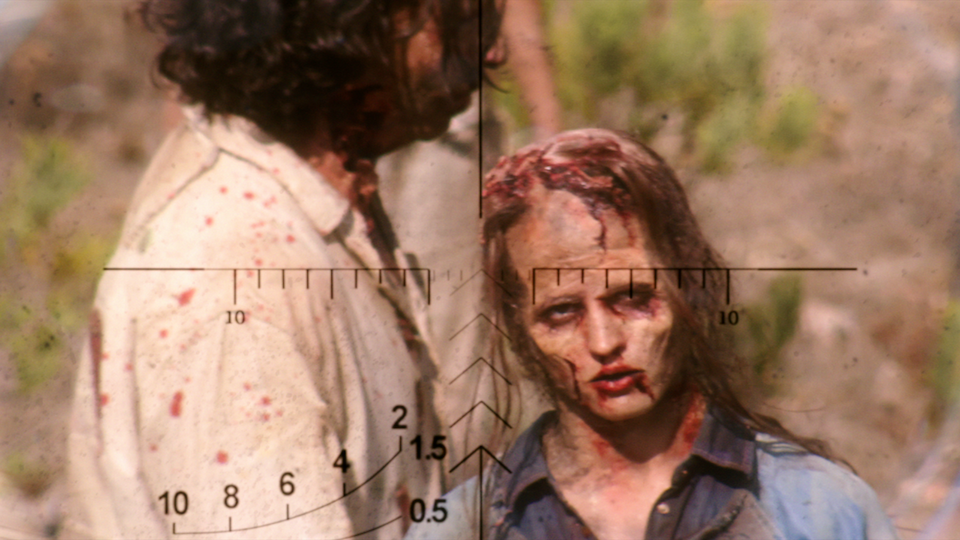 Blackpool born director Steve Barker first came to prominence with his low budget horror film, Outpost, about a band of mercenaries sent to an old military base in some Eastern bloc hell hole, where they wake up the results of a deadly Nazi experiment. It is pure genre bliss. Fast-paced, scary, nasty and tons of fun!

His latest film – The ReZort is screening in the Night Moves strand at this year’s Edinburgh International Film Festival. Mixing the tech thriller elements of classic Michael Crichton with pure zombie horror, it has been referred to as Westworld meets The Walking Dead.

We caught up with Steve during the festival to discuss the film, it’s influences and the politics lurking just under the surface. There are some minor SPOILERS in the below interview. You have been warned. Enjoy.

Read the EF review for The ReZort here

How did you first get involved in the project?

I was brought in quite late actually, well certainly later for me because I’ve always worked in the genesis of everything I’ve done up until this point. And initially I was a bit unsure because I’d done two movies that effectively contained zombies – although they’re not really zombies – and as much as I grew up and loved genre, horror was probably the least favourite genre for me when I was growing up. But I loved the concept. I thought the concept was really genuinely interesting in the sense that….well at the time that we were making it, that we were shooting it and cutting, nobody had done a Jurassic Park / Westworld / Michael Crichton vibe thing for about 15 years. We knew nothing about Jurassic World.

Yeah, the film was actually finished in June/July last year. So it was weird, I watched Jurassic World a week after I finished this, and I sat and watched it and thought, “oh this could end badly for us.”

Was that quite disheartening?

Not really, it was more a case that they had Jurassic Park money, and they had them going there (to the island) on the boat, but it’s a massive Jurassic World boat. But either way it still wouldn’t have stopped me from doing it. Because the other thing that intrigued me was that it had a take to it that was different. Most of the stuff these days that are doing zombie things, they all come from the point of view that is Lord of Flies. It’s all about, what happens when you take the world away? What happens when you take the rules away? And I just liked this idea that by the very nature of the setup it was already saying, it’s not about how brutal we can be when all that is taken away, it’s that we can be actually much more terrifying than that when we win, and when we’re in control. And I think that’s what’s truly frightening. It was those things that completely won me over and managed to get round the “oh god I’m doing zombies again”

Let’s talk about zombies. This is essentially your third zombie feature.

There was certainly a moment when the first zombie showed up on set and we all went oooh! It’s always the same. Everyone thinks that film crews are really jaded, but there’s always this moment when you’re like, yeah it’s hard and you’re tired, but the moment someone in big prosthetics walks on you’re all like “oh cool” and get all excitable and start having selfies (laughs). But even when I was doing that there’s a part of me going “I’ve been here before.”

It seemed you had something quite political to say in this film?

It’s so odd, because the first conversation I had with them (the producers) about the film, I mentioned Syria, and this would have been November 2013, and at that point it was just a humanitarian crisis that had turned into a political football. In the early versions of the script the action was entirely set in the UK, and they had now decided that they wanted to move it abroad, and I pitched this idea to the writer that you fly out to an island, get on a boat to the resort, but you can see that this is all part of a refugee crisis that has been brought on by this war. I’d love to take credit for all of it, but that’s all I brought to it! I was worried that people would think we were being exploitative, particularly with the final image of the film. I thought people would read that wrong, but that was finished way before the crisis in the Mediterranean started happening.

All good zombie films are not really about zombies. There’s always a bulging vein of politics running through them, and I would expect European audiences especially to relate to those final scenes.

It’ll be interesting to see, because it’s not exactly subtle. (Laughs) It’s more full on than I probably intended in the original cut, because I ended up pacing up the film. That was a decision where I knew I would look like I was ladling it on with a trowel. And yet your first obligation as a director in this kind of film is that you’ve got to deliver on the side of the genre part of it. And so the pace that we needed to go at, meant it compressed it a lot more. And so it ended up becoming a little more obvious than we wanted. But I’d still rather make a movie that had that opinion than not.

The screenwriter (Paul Gerstenberger) mentions the work of Michael Crichton, specifically Jurassic Park and Westworld as being touchstones for the script. Were these also the inspirations that you drew on whilst shooting, or was there something else entirely?

I love playing with the genre elements. I like the generic bits. I like that you know from the moment the film starts that the place is going to fall…its a given.

The technology has to fail

Yeah completely. And then it’s a game of who is going to live and who’s not going to live, and how do you play that. I thought there was already so much in the structure that harkened to that Crichton look. The allusions in the movie were so obvious from the start I thought I can’t keep putting more in there. I mean I think there’s big influences from things like….there’s always going to be big influences in my work from people like John Carpenter….but that’s not necessarily specific on this picture. I just think I grew up watching these films, I was exactly the right age, I was the first generation of video, I was watching Alien, Blade Runner, The Thing, The Fog, Escape from New York and those films still have a massive influence on me.

One of the most interesting things about the film is that it is set in the post-post-apocalypse. How much did you enjoy taking a genre viewers are so familiar with, into a setting that hasn’t been seen before?

If anything I would have loved to be able to do more with that. It really fascinated me to start with and I had a billion ideas, none of which we could afford, time wise, and in the end ultimately it was always about getting to the island with the themes and the characters intact. But I had loads of ideas that I was completely in love with about what futuristic London would look like, what they’d actually done and how people would live their lives. There were actually a couple of scenes that we shot and that went because of the pace. I loved coming up with that stuff. I’m not going to tell you too much of it though in case someone ever lets me do it!

I’m working on three projects, and I can’t tell you what they’re about. But two of them are movies, and one of them is television – an 8-part TV show. And none of them are zombies.

So you’re zombie trilogy is complete?

Yeah that’s it, I’ve moved on from that! I quite fancy doing something PG-13.

In this article:Edinburgh International Film Festival, steve barker, the rezort