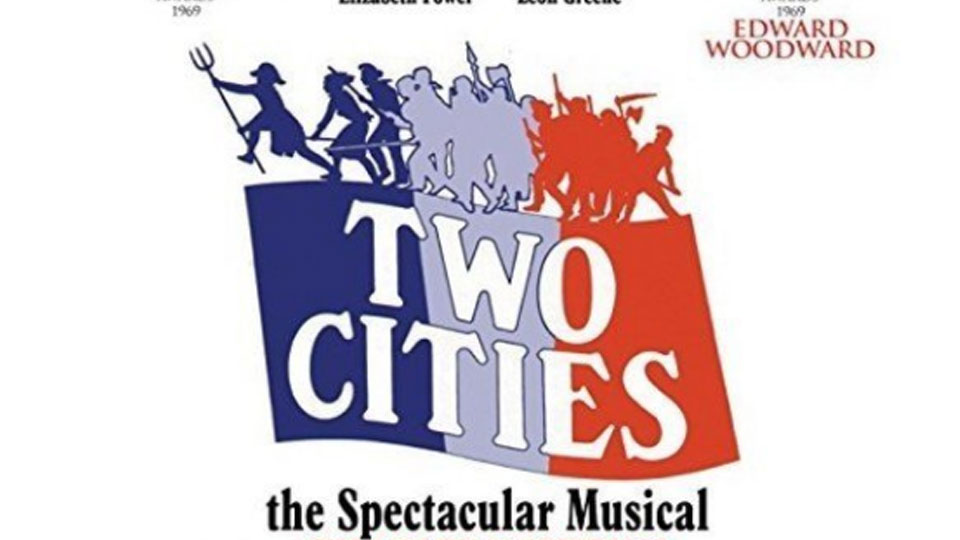 Two Cities is a musical version of Charles Dickens’s A Tale of Two Cities that hit the West End in 1969. It boasted music by Jeff Wayne (War of the Worlds) and starred Edward Woodward, one of the biggest British names in entertainment at the time, as Sydney Carton. The sensational Woodward would later win the Evening Standard award for best male performance in a musical for his role.

Despite the phenomenal talent behind it, Two Cities was not an overwhelming success and has slipped into obscurity. Thankfully, a full cast recording was made at the time, which has now been released by Stage Door, allowing contemporary audiences to re-evaluate this ‘lost’ British musical.

This blessing is as mixed as the original reviews, and certainly Two Cities is an odd bunch of songs with moments of greatness and moments of awfulness. Things get off to a good start with The Best of Times, a bombastic ensemble piece that introduces the audience to the crux of the story. It’s title comes from one of the most famous opening sentences in English literature (and one of the best uses of the semi-colon): “It was the best of times; it was the worst of times.”

Tender Love and Patience introduces the audience to Lucie (Elizabeth Power), and as a lullaby it is fairly effective, but since it’s a solo it’s exposing early on what is perhaps the musical’s main weakness – there isn’t much interaction between the characters through song. The isolation of the major players leaves it difficult to follow the narrative thrust, even for those who may know Dickens’s story well, and leaves the whole thing oddly uninvolving.

Independent Man introduces Edward Woodward’s Sydney Carton, who is upbeat to begin with – and in fact the whole musical is strangely chirpy. Undoubtedly, Woodward’s involvement is a major draw, and will be the main source of interest in this release. As well as being a very fine actor, Woodward was also a magnificent singer, and would come to have around half a dozen albums to his name. Whenever he’s in full voice, Woodward brings Two Cities to life.

Ultimately, though, a musical has to be more than the performance of its leading actor. Lionel Bart’s Oliver! successfully removed all of Dickens’s teeth – yet the musical was a hit because it retained the essence of the story and had some memorable tunes to boot. Two Cities doesn’t achieve that, and consequently, whilst a lot of it is perfectly competent, it fails to bring the story to life.

Perhaps the best song on the album is the climactic It’s A Far, Far Better Thing, which Woodward delivers with gusto and plenty of vibrato. It’s certainly a standout, and Woodward nails it, but it feels as if it has come out of nowhere. Fans of Woodward’s singing career should certainly check it out.

There are a few extra tracks on the disc that were cut from the production. The Wine That Flows In The Street is perhaps the best. It’s a decent ensemble piece with an effective chorus and a sinister edge, similar to the Work Song of Les Miserables. There’s a wicked humour to Let Them Eat Cake, which is also worth a listen. Other songs deserved to be cut, especially the trio accompanied by an end-of-the-pier organ, more redolent of a wet bank holiday weekend in Morecambe than the French Revolution; and there is an occasional tinniness to the vocals as the bonus songs play out.

Overall, Two Cities isn’t a great musical, but it’s decent enough. Edward Woodward’s involvement is enough to recommend it, and it’s another enjoyable curiosity from the Stage Door collection.