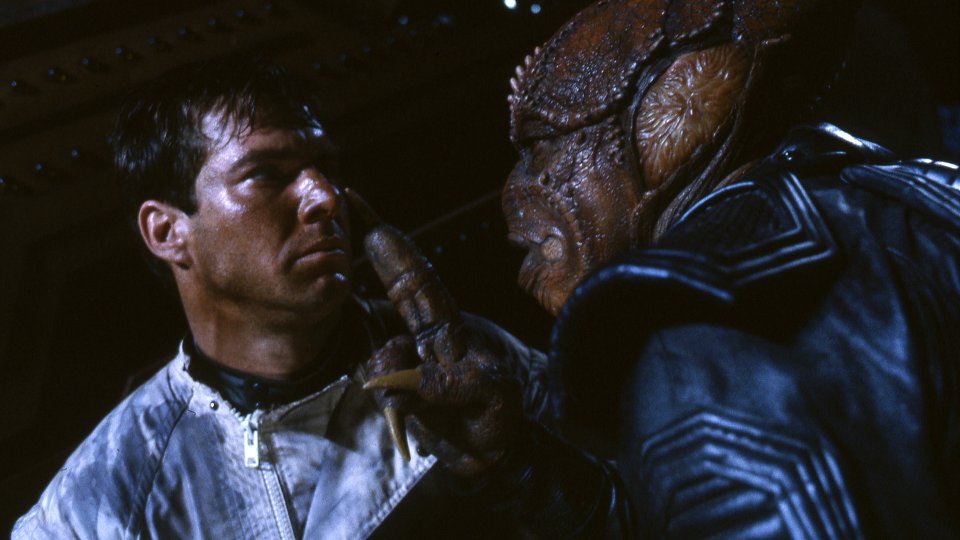 In many ways, Enemy Mine was very much ahead of its time. However, in many more ways, it is one of the most dated science fiction films I have ever seen. There is no denying that getting sci-fi right on screen is a difficult task. For every 2001, Star Wars, or Blade Runner, there are hundreds of others, ranging from the ambitious failures and cheap imitations, all the way to the realm of utterly dreadful.

Enemy Mine manages the impressive task of being ambitious, cheap and dreadful all at the same time. It also, despite being produced in 1985, looks like it was made in 1960. Watching this without any prior film knowledge, you would never guess that this was released into a world where Star Wars already exists.

The plot, set in the distant future, follows a human pilot, Willis Davidge (Dennis Quaid) who is also our narrator. In his opening voice over he explains that since space exploration went beyond our known universe, humanity has been at war with alien races for control of the vast and rich frontier of space. The main enemy of humanity is the Dracs, an asexual breed of humanoid reptile. Yes…you heard me.

During a dogfight with a Drac pilot, Davidge and the Drac end up crashing on a hostile alien world. Though it should be noted that it is not so hostile that they can’t find food, water and both be able to breathe.

Thrown together by war, these two enemies soon realise that they will have to work together in order to survive. The Drac, Jeriba Shigan (called Jerry by Davidge) is played by Academy Award winner Lou Gossett, Jr, covered head to toe in a rubber suit and speaking an alien language in a series of strange guttural purrs. You can see that the intention was to create something otherworldly, but the end result is sadly just an Oscar winning actor debasing himself in a rubber suit.

The film jumps forward in time, to find them co-existing in a home they have built. They are learning each other’s languages and customs. They are looking after each other and providing support and comfort for each other. We’ve gone from space battles and fights to the death to a sort of odd couple Robinson Crusoe. There’s no getting away from the fact that on the surface, this is an odd little film that just gets odder as it goes on. But is there more too it?

Director Wolfgang Petersen (Air Force One, The Perfect Storm, Das Boot), crafts an opening act that works as an allegory of US foreign policy; their complete lack of understanding of an enemy, and going blindly into a hostile and unknown land. It also posits that enemies can only truly come to understand one another if they communicate, learn each other’s language and customs. Maybe if George Bush Sr. had been given a copy of this film, the world would have been spared a great deal of sorrow. I’m being facetious of course, but it’s all in those first 20 minutes.

The film’s second act then portrays a same sex couple making a life together and living in perfect harmony. This is the sort of thing that would not have ordinarily got made in Reagan era America, despite all the homoerotic action movies of the mid 80s. An actual normal same sex couple would have been too scandalous for a mainstream movie. But subtly hidden under a surface veneer of sci-fi, and there you have it plain to see – a socially tolerant movie made in a socially intolerant world.

From a technical point of view this is an objectively bad film. The sets are terrible, the effects are like something from a Saturday morning serial, and the dialogue is at times just laughable. But any film that has the guts to take a space adventure, in the post Star Wars world, and turn it into a socio-political message is definitely worth seeing. It is clear why this film has such a cult following.