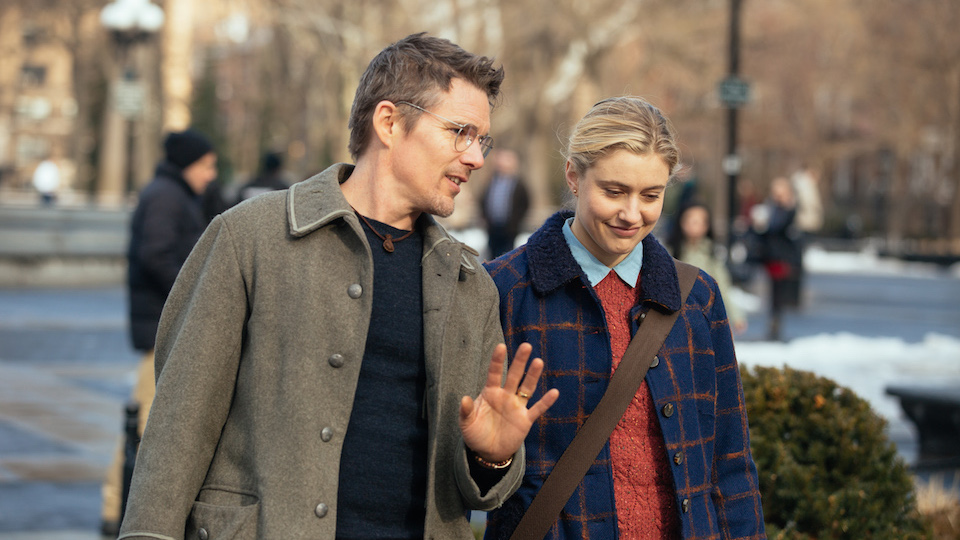 Rebecca Miller’s fifth feature comes to EIFF this week, and with it she has created something sweet and funny and complex and intelligent and utterly delightful. But first – a warning: Maggie’s Plan is about intellectual New Yorkers – a bit pompous, a bit pretentious, very verbose and occasionally selfish individuals, analysing themselves and everyone and everything around them.

Are you still here? Good. I understand that this type of film is not everyone’s cup of tea. But Miller has artfully created a cast of characters that exist in three dimensions, and in spite of all their faults, are extremely pleasant company for 98 minutes.

The titular Maggie (Greta Gerwig) is a teacher at a college, where she specialises in helping art students find a business outlet for their creations. She refers to herself as a bridge between art and commerce. Her “plan” is that she wants to have a baby through artificial insemination. She has tried to find a man, but now believes, in a really rather melancholy way, that she is incapable of loving someone for more than 6 months, or have someone be in love with her for that length of time either. She explains this theory to her married friends, played by Bill Hader and Maya Rudolph.

Then she meets John (Ethan Hawke), a fellow professor, who Maya Rudolph’s Felicia refers to as a “real panty melter” and “one of the bad boys of the ficto-critical anthropology.” He’s married to Georgette (Julianne Moore) a more successful academic, who is not interested in the novel he is trying to write. Maggie is interested. Maggie gets it. Maggie gets him. John describes his marriage to Georgette as a gardener and a rose. She is the rose, but he doesn’t have green thumbs. With Maggie, he gets to be the rose. They have an affair, they get married, and Maggie gets to be a mum.

And that is only the end of the Act One. Where Rebecca Miller takes us from here is constantly surprising and interesting. Maggie hatches a new plan, and everyone gets caught in its wake. She sees herself as a capable and self-sufficient woman, but everyone around her just thinks she is a control freak. Miller’s understanding of the characters is so complete, and she handles each turn and revelation with the lightest of touch. As a result, the jokes all land, and the emotional moments ring true.

She is aided in this of course, by a remarkably talented cast. Greta Gerwig is fantastic, as you would expect playing a hip New York millennial. Her face is so expressive, she would have been a huge star in the silent era. Likewise, Ethan Hawke continues to be one of the finest actors and most natural performers working today. No matter who he is playing, I believe him. I don’t have a clue what ficto-critical anthropology is, but I fully believe that Ethan Hawke is an expert in this field.

Miller also makes the New York of this witty rom-com feel like a city that people actually live in. She films it in a way that is both beautiful and down to earth, and not just a promo video for the tourism office, ticking off landmarks with each establishing shot. It might feel like a lazy comparison to invoke Woody Allen when discussing an intelligent comedy set in New York, but Maggie’s Plan genuinely has that feeling of classic era Woody. Hilarious, understated, great use of music, and beautifully written roles for women. The comparison, I assure you, is the highest praise.