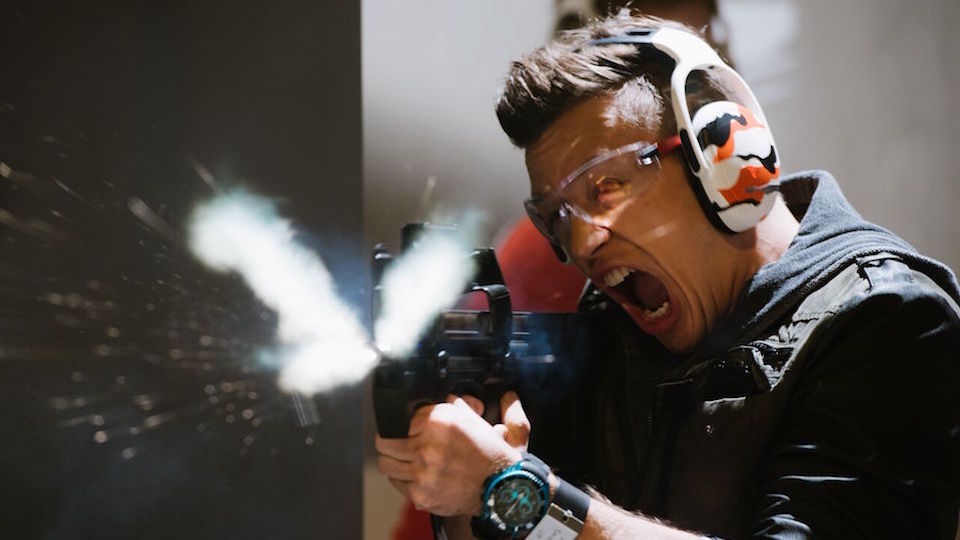 A fresh new spin on the zombie survival thriller courtesy of Outpost director Steve Barker. We’re in the post-post apocalypse. The virus that killed a third of the human race, and then brought them back as flesh eating monsters, has been cured and contained. Humanity won. This is all neatly explained in an efficient opening montage, that would ordinarily be the entire plot in a more familiar looking zombie film. You know the score, well meaning scientists, deadly virus, sick people, plague, zombies, chomp chomp, end of civilization, and then a few gritty sweaty survivors fight for a hopeless future.

Well hey, forget all that, because five minutes into The ReZort and we’re dropped into a world where all that has been and gone, and a canny industrialist has turned an overrun island in the Mediterranean into a 5-star safari resort for people to hunt what is left of the shuffling dead. Sun, sea, sand and slaughter. Or as one character puts it, “every apocalypse deserves an after party.”

We see all this through the eyes of Mel (Jessica De Gouw) who lost her entire family in the outbreak, and is suffering from post-traumatic stress. She doesn’t feel as if she can move on in life until she faces up to her literal demons, and so she travels with her boyfriend (Martin McCann) to The ReZort. Also on the trip are a woman who was jilted on her wedding day and is looking to let off some steam (Elen Rhys), some macho weekend warrior businessmen, two annoying teenagers, and a mysterious loner named Archer (Dougray Scott).

The safari park is really well realised, with impressive sets and beautiful locations. Taking inspiration from Michael Crichton, there is a definite Westworld/Jurassic Park vibe to proceedings, complete with control room full of techies bashing keyboards and staring at ridiculously complex interfaces.

The gang start having some fun, blasting zombies from a safe distance, and in a police-style shooting range, with the Z’s shackled to the moving targets. But then the inevitable happens – the classic Crichton moment – the technology fails. The zombies are loose in the park, and our guys are stranded in the middle of an island. The initial zombie uprising is very impressive, with a few good scares, plenty of gore, and a chilling scream of recognition from one of the undead that brought to mind the end of the 1978 Invasion of the Body Snatchers.

With the gang coming under attack, Archer reveals himself as a badass killing machine – a man for whom the war never ended. He assumes command and tries to lead them all to safety. The film takes on a distinct John Carpenter vibe in the second act, with the disparate group under siege and desperately trying to survive. This is underlined by the fast-paced action, tough guys with guns and synth heavy score. There is a terrifically mounted sequence in a pitch-black warehouse, full of wire cages, and the groaning sounds of the dead.

The ReZort is one of those great ideas for a film, that you can’t believe has never been made before. The excellent premise is backed up with strong direction and impressive zombie effects. Gorehounds will not be disappointed either. Jessica De Gouw leads the cast well, and is ably supported by Dougray Scott’s strong silent type. Unfortunately, some of the supporting characters are just too unlikeable to engage with. You’ll be glad when the dinner bell rings.

Like all good zombie films however, The ReZort isn’t really about zombies. Underneath the gloss and gore is a deeply political film, raising important and relevant questions that should very much resonate with contemporary European audiences.