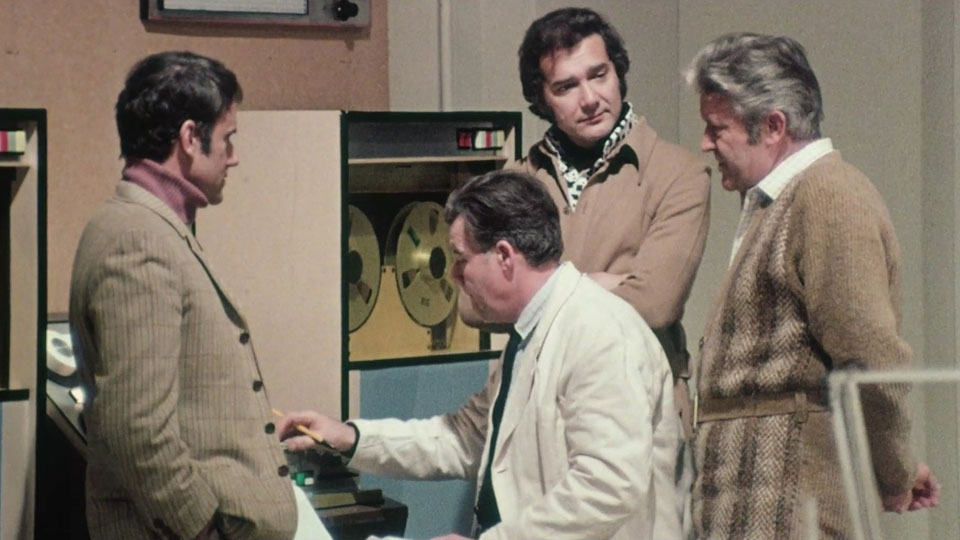 The feature film of Doomwatch followed hot on the heels of the major success of the television series which had caught the public imagination with its terrifyingly prescient storylines. It arrived at cinemas in 1972, and was directed by Peter Sasdy, a favourite amongst fans of cult British movies for his contributions to the Hammer Horror franchise, as well as the Nigel Kneale TV-feature The Stone Tape.

Sasdy proves a good choice, because he makes Doomwatch much creepier and more horrific than the TV series ever was. In fact, there are elements, such as an outsider arriving on a remote Scottish island only to find that the locals are hostile and hiding a terrible secret, that recall the more revered horror classic The Wicker Man, which would appear the following year.

The movie falls between stools. It doesn’t quite depart from the TV series and make its own stamp, but rather keeps hold of the original cast whilst side-lining them into supporting parts and giving the leads to the more bankable stars Ian Bannen and Judy Geeson. This compromise is perhaps the weakest point of the film, since the cuts back to Doomwatch HQ in London to catch up with Doctor Quist and co. become tiresome and distracting, with the main storyline involving Doomwatch new boy Dr Del Shaw (Bannen) and his uncovering of an ecological disaster affecting a small community far more interesting.

The original Doomwatch cast in the film. Credit: Aim Publicity.

Whilst it can be wondered if it would feel more authentically like the TV series if Simon Oates’s Dr John Ridge had led the action, there can be no doubting that the storyline itself fits comfortably within the remit of the original premise. Whilst the movie pushes further into the horror genre (Dr Shaw finds the body of a girl in a shallow grave, and is later attacked by something monstrous in a spooky barn) the ecological threat to the waters surrounding an island, and the human consequences of the islanders who eat more fish becoming deformed and aggressive, is a top drawer science-based plot well within the comfort zone of the series.

The performances on the whole help to sell the story to the viewer. Having said that, it’s a shame to see the always-entertaining Simon Oates given so little to do, and his ostensible replacement, Ian Bannen, whilst he gives his all to the part, is a touch mannered and downright odd in places, especially in a scene in which he pleads with the islanders to listen to him. Judy Geeson shines as the school teacher who becomes Bannen’s conduit to the locals, whilst George Sanders makes the most of his cameo as a shadowy senior naval officer. Shelagh Fraser, blessed with one of those faces that conveys concentrated worry, ably adds to the movie’s unsettling qualities.

With effective and extensive location footage (in a part of Cornwall that Sasdy’s directorial eye renders permanently creepy) and top talent either side of the camera, Doomwatch is a film with plenty of merit. Its appeal lies with fans of cult classic drama, and it will perhaps satisfy both the Sasdy/Hammer Horror aficionados, whilst offering a little more substance than the mass-produced output of that particular studio for science-fiction fans. In terms of artistic merit, it falls between Hammer Horror and The Wicker Man, but the ecological threat is an ingredient all of its own. With the environmental movement having gathered pace after the 1970s, Doomwatch is in many respects well ahead of its time. That it tells a cracking story and does so with suspense, shocks and even a few brains is reason enough to revisit it now.