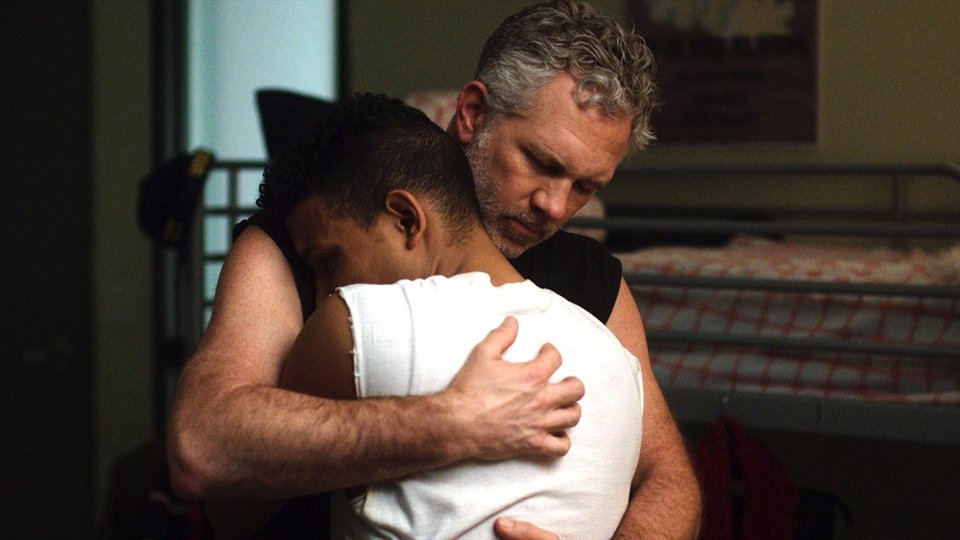 Colin McCormack (Gerald McCullouch) thinks he has everything; a top job in TV, devoted best friend Stew (Dan Via) and plenty of casual hook ups with much younger guys. His lifestyle is thrown a curveball when cute new intern Tee (Jaime Cepero) starts working for him and Colin finds himself developing feelings. Following a night drinking, Colin makes a move on Tee and the two end up having sex. As their relationship progresses, it drives a wedge between Colin and Stew, and Tee starts to become very territorial. Tee’s behaviour leads Stew to question the relationship but as he digs deeper, he pushes Colin further away and risks losing his best friend.

Daddy is Gerald McCullouch’s directorial debut and was written by his co-star Dan Via. You’d be forgiven for reading the premise and thinking ‘seen that’ but trust me when I say you definitely haven’t. The film’s third act will have you shouting ‘say what now?’ and that’s pretty much all I can say about it without ruining anything. Once you see the movie a whole lot about it starts to make sense but I highly doubt any one will see what’s coming.

Up until that point Daddy seems to be a bog standard romantic comedy with the focus on an age difference and an inappropriate work place relationship. Colin and Tee escalate their relationship quickly as they start to spend all of their time together and really get to know one another. This pushes Stew out and tensions quickly arise between Stew and both Colin and Tee. Does Stew secretly harbour long unfulfilled feelings toward Colin? Is Tee up to something and trying to get rid of Stew? I couldn’t possibly give you the answers to those questions.

McCullouch impresses pulling double duty as star and director. He’s a popular actor in gay cinema having built a fan base for his role in the BearCity movies and he’s well known to TV fans for his recurring role in CSI. It’s his directing though that really impresses here and he acquits himself very well. He’s only previously directed a short but he handles the task here with ease. McCullouch gets great performances from his cast and he frames the whole film in a surprisingly sweet and lovely way.

Jaime Cepero, best known for his role in the short-lived musical drama Smash, gives a more nuanced performance than I’ve seen from his before. He begins the film as a nervous intern but he allows Tee to grow and shows many sides to the character over the course of the movie. Also worthy of a mention is Dan Via as Stew and it’s his moments with Colin that provide some of the best in the film.

Daddy is a film you will either love or hate and it’ll likely all come down to the last half an hour of the movie. Personally I thought the film was very bold and it certainly didn’t go in the direction I was confident it would within the first 10 minutes. McCullouch and Via have crafted a bold and emotional film with Daddy and it’s one that is likely to cause debate and likely upset. I think the film handled its subject matter incredibly well.