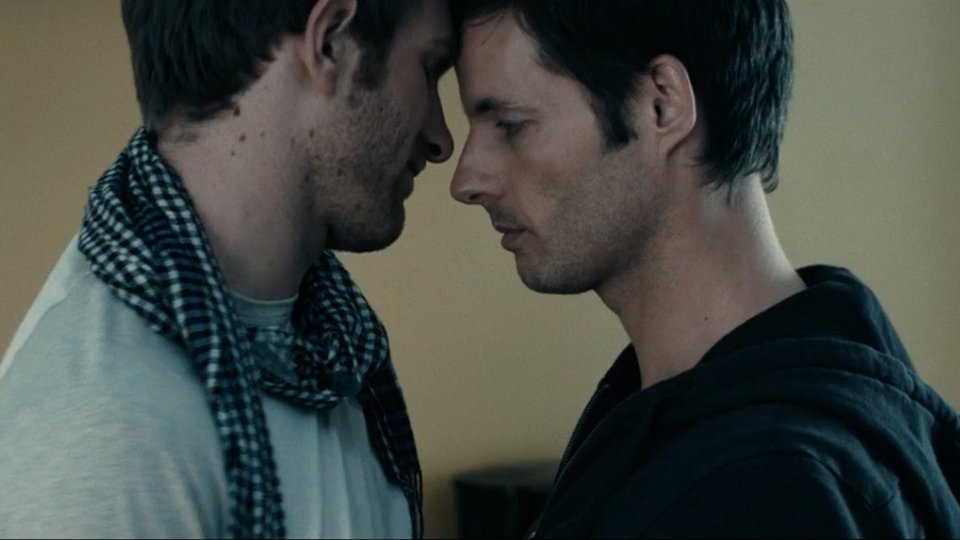 The breakdown of a relationship is never an easy thing but it’s even more difficult when the two people in it have very different ideas of where their relationship is at. Philipp Karner makes his directorial debut with Like You Mean It, a film he wrote and also stars in, which is about a relationship gone sour and how the couple involved deal with the fall out.

Voice over actor Mark (Karner) and his singer-songwriter boyfriend Jonah (Denver Milord) reach a crossroads in their relationship with Mark questioning whether he wants to be with Jonah any more and Jonah wishing they could recapture the passion they had when they first got together. Having met on the rebound, Mark and Jonah’s casual sex turned into something altogether more serious but after being together for a while, it becomes clear that what they want from their relationship isn’t the same.

An added complication is that Mark suffers from depression, something that Jonah is quick to blame when the relationship hits a particularly rough patch. For the first half of the movie Jonah seems pretty oblivious to the problems in the relationship expecting they will just iron themselves out over the course of time. Mark has other ideas and when he reconnects with his ex Kyle (Andrew Dits) he starts to wonder if maybe he and Jonah are just not to be after all.

Much of what transpires in Like You Mean It is wordless. The distance between Mark and Jonah is expressed a lot of the time through physicality and actions rather than conversations. It’s an authentic look, and semi-autobiographical for Karner, at the reality of a relationship breaking down. Unlike the depictions in many movies, couples don’t often sit down and pour out their feelings and the way Mark and Jonah handle things is believable.

At the heart of the movie are the performances of Karner and Milord. Karner is the stronger of the two but his character does get more material to work with. The perspective is always Mark’s so we only really get to see Jonah being reactive to the decisions that Mark makes. One scene that stands out is when Mark books a therapy session without consulting Jonah and the delivery of news comes as quite the surprise. It’s just one of many moments that you realise how distant the couple has become.

Like You Mean It isn’t an easy film to watch. If you’ve ever been in a relationship that hits a rough patch or been through the pain of it breaking down completely, a lot of the material here will likely resonate with you. Over the course of its 90 minutes, Like You Mean It explores a variety of subjects including infidelity, love, sex and depression and it certainly doesn’t paint a rosy picture. That said it’s a powerful and moving film with strong performances and plenty of emotion. It leaves a fair amount for the viewer to interpret as they wish and you’ll walk away from it impressed at what Karner has managed to accomplish.

In this article:Denver Milord, Like You Mean It, Philipp Karner, TLA Releasing