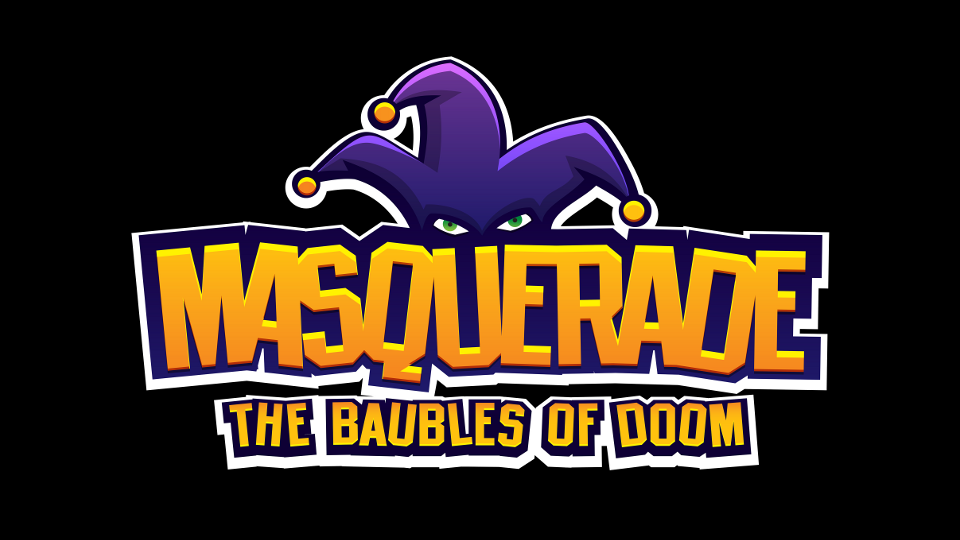 So many games have the player fighting against hordes of zombies, aliens, monsters or robots, but in Masquerade: The Baubles of Doom you’re fighting clowns. Players who suffer from coulrophobia (fear of clowns) should probably stay clear.

In Masquerade you play as a Jester named Jaxx, he’s a strange chap with blue skin and large muscles, who starts the game with his girlfriend Comedia. Instead of going off on an adventure together in search of the mysterious Baubles of Doom, Comedia is kidnapped by the clowns. So it’s up to Jaxx to fight his way through the endless clowns to save her from their boss, Big Nose.

The game is set across eight acts which are a mix of fighting clowns and platforming sections. At the end of each section there’s some kind of boss to defeat in order to progress.

Watch the Masquerade: The Baubles of Doom story trailer below:

Jaxx carries a massive hammer and the combat aims to emulate the tried and tested formula from the Batman games with attacks and counters. You spend most of the time spamming your attack button until you see a yellow fist appear above an enemy. This means it’s time to hit your counter button. Combat is actually quite slow and there is a decent flow to it once you get used to it.

The aim is to string attacks together without getting hit. This is harder than it sounds often due to the camera as it can be a bit too close. This makes it impossible to see when some enemies are going to attack. It doesn’t spoil things completely and you do get used to it after a while. Jaxx can also jump and roll to evade attacks.

Many areas have outhouses which act as endless spawn points for the clowns. It’s easy to get overwhelmed so you need to get in close, fight the clowns and destroy the outhouses as soon as you can. There are also enemies that attack from range which you can knock down by throwing your hammer.

When you down a clown you take its nose. Obtaining enough noses upgrades Jaxx with new special attacks. Once you obtain them, fighting fills a bar that allows you to unleash them on the enemies.

The platforming sections are fiddly and become frustrating fast. The controls just aren’t as tight as they need to be which spoils the fun. Falling off a platform sends you back to the previous checkpoint resulting in you needing to constantly play the same sections over until you get to the next checkpoint.

The bosses at the end of each act take some beating and they have groups of clowns to contend with at the same time. These fights can take a while to beat and again can be quite frustrating if you keep dying.

One of the strongest areas of the game is its presentation. The environments are bright and colourful with a cel-shaded cartoony look to them. The animation is also decent and helps bring the clowns to life. The quality of the visuals is even better in the numerous cut-scenes throughout the game which progress the story.

As you might expect with the inclusion of clowns, Masquerade is also a game with a sense of humour. How funny you find it will depend a lot on your own sense of humour but it did have me laughing out loud several times.

I encountered a couple of serious bugs when playing Masquerade. First when trying to launch the game without a gamepad in it just crashes back to your desktop after a couple of splash screens. There’s no error or help to get you past it, I just happened to work it out by accident. Also there appears to be a saving bug which I’ve encountered at the end of the first act. After around half an hour of play to beat the first act the game became stuck on a black screen. Eventually I gave up and killed it via Task Manager but upon restarting I had to start the game from the beginning which was very frustrating.

Overall, Masquerade: The Baubles of Doom is a decent brawler with a sense of humour. The platforming sections could do with tighter controls but overall it’s an enjoyable game. It’s only around 4 hours long but I don’t think you’re likely to return to very often once you’ve beaten it.

Visit the official Masquerade website for more information about the game.

Advertisement. Scroll to continue reading.
In this article:Clowns, Masquerade, PC, PS4, Steam, The Baubles of Doom, Xbox One