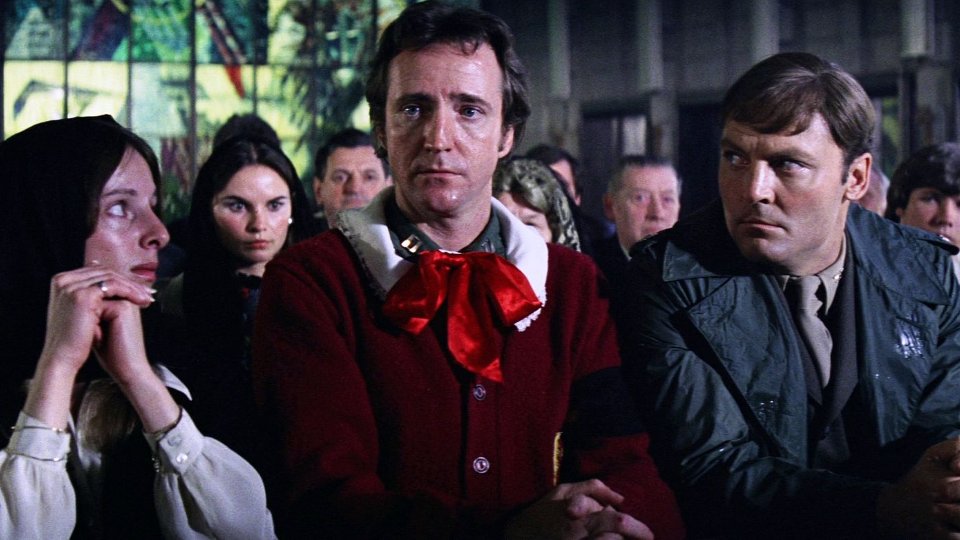 Imagine if One Flew Over the Cuckoos Nest, M*A*S*H, The Seventh Seal and Roadhouse were dropped into a blender. The weird tasting smoothie you would end up drinking would be The Ninth Configuration. Written and directed by William Peter Blatty, and adapted from his own novel, this is one of the strangest and most baffling films I have ever seen. Mental illness, military madcap antics, serious questions of faith, and an exquisitely violent barroom brawl combine to make this a truly unique viewing experience.

Deep in the forests of the Pacific Northwest, is a gothic castle, the kind you might see in a Hammer Horror film, full of terrifying statues, gargoyles and demons. The castle has been commandeered by the Pentagon to be used as an asylum for service personnel who have gone mad in the line of duty. The tone veers wildly in these opening scenes. From an incredibly ominous opening, with astronaut Billy Cutshaw (Scott Wilson) aborting a mission to the moon and having a complete mental breakdown, we then cut to the castle, where the behaviour of the inmates is like an episode of M*A*S*H. I kept waiting for Klinger to turn up wearing a dress.

Arriving into this world is Colonel Kane (Stacy Keach), an army psychiatrist who is assuming command of the facility. He plans to rehabilitate the patients by letting them play out their delusions. This includes a patient who thinks he is a WWII POW, and the doctors are Nazis, so Kane makes all the staff dress up accordingly. Another patient obsesses over staging productions of Shakespeare, but only casting dogs. It’s undoubtedly funny, but I constantly found myself asking if I was supposed to be laughing. I think I was. I think Blatty fully intended for it be slapstick. Just as he intended for it to be deadly serious.

The middle section of the film is mostly dedicated to a series of discussions between Kane and Cutshaw, as they debate faith, atheism, good, evil, and the existence of God and the Devil. I know that sounds dreadfully dull, but Wilson (perhaps best known for playing Hershel in The Walking Dead) plays these scenes with such energy and unpredictability, you can’t take your eyes off the screen. In one scene Cutshaw declares there is only ugliness and evil in the world, and God is nothing more than a giant omnipresent foot!

Blatty appears to show no concern whatsoever for the rules of filmmaking. The plot, pacing and tone are all over the place. As I said at the top of the review, it is like four films for the price of one. There is a bar room brawl towards the end of the film which is wildly enjoyable, but again feels like it has been plucked from a completely different movie. Despite all this, there are enough twists and turns and shocks in the final third to make this a weirdly entertaining way to spend a couple of hours.

This new Blu-ray release comes packed with extras, including a new interview with William Peter Blatty. There are also interviews with the main cast, including Stacy Keach. There is a behind the scenes featurette looking at production design and the music. We are also treated to a feature length commentary with the director and film critic Mark Kermode (who also provides an introduction that was recorded years ago for Channel Four). The package is rounded off with a selection of outtakes and deleted scenes.

In this article:The Ninth Configuration