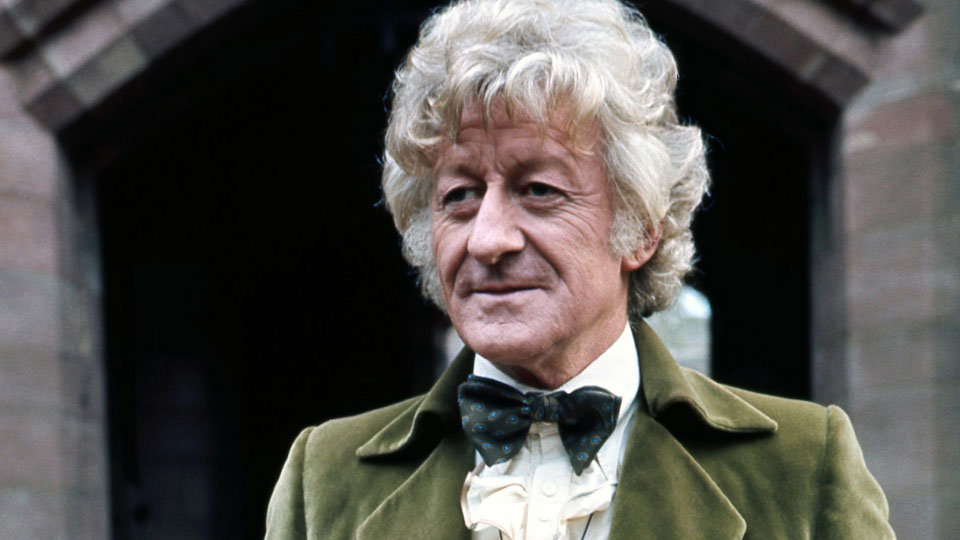 The 20th May 2016 will mark the twentieth anniversary of Jon Pertwee’s death. We look back over the career of one of Britain’s great entertainers, and assess his most celebrated roles.

Jon Pertwee used to recount that when it was suggested [by script editor Terrance Dicks – or was it Shaun Sutton, the BBC’s Head of Drama? The story varies…] he play Doctor Who as himself, he responded, “Who the hell’s that?” Yet despite a career mostly in comedy, pulling faces and putting on silly voices, Pertwee had a very clear idea of who he was and the persona he wanted to portray. He had an instinct for a good story and a taste for playing the raconteur.

Pertwee was a born entertainer, growing up in a theatrical family, and he loved nothing more than telling stories and keeping audiences laughing and spellbound. Later in his career, his one-man show An Evening With Jon Pertwee brought together a lifetime’s worth of anecdotes. He would often perform his favourite stories adopting character voices, and sending himself up as much as his colleagues and acquaintances.

His expulsion from RADA is a prime example. Principal Sir Kenneth Barnes sent Pertwee packing with a flea in his ear, telling him he would never make it as an actor owing to his lisp and his bad attitude. Here’s Pertwee telling the story of his ignominious departure from drama school himself on Wogan in 1989:

As he was born in 1919, Jon Pertwee was at the prime age to see combat during WWII, and he served in the Navy, distinguishing himself and seeing plenty of enemy action. During this time he was shot in the knees, and would later be crippled by arthritis as a consequence. If you’ve ever noticed that he doesn’t run terribly convincingly on screen: that’s why. In his later life, Pertwee recounted all his tales in his autobiography, Moon Boots and Dinner Suits, which has recently been reprinted and is a fantastic read.

Pertwee was one of the last of the old-school entertainers who came up through vaudeville. He was a massive radio star in the days when there was such a thing. He never lost his sense of adventure and loved water sports and diving, and was enthusiastic about vehicles and technology (an aspect of his own persona he brought to Doctor Who). He had a house for many years on the Spanish island of Ibiza.

Jon Pertwee died unexpectedly in his sleep, whilst on holiday in the USA, on 20th May 1996, aged 76. The cultural landscape shifted with his loss, but his sparkling personality and talent for entertainment lives on in his recorded legacy. Here are some of the highlights of his long and illustrious career.

Undoubtedly the show that put Pertwee on the map, The Navy Lark was a hugely successful radio situation comedy which ran from 1959-1977. Pertwee played a fictionalised version of himself – Chief Petty Officer Pertwee – amongst a host of other characters. This enabled him, alongside fellow comedy character actor Ronnie Barker, to showcase his talent for voice work and comic timing. The series was produced by the BBC and also starred Leslie Phillips, Stephen Murray and Richard Caldicot.

The House that Dripped Blood

One of Pertwee’s best-known big screen outings, his role in Amicus Productions’ 1971 anthology continues to amuse fans of cult classic British horror movies. He appears in the final segment, entitled ‘The Cloak’, alongside his future Doctor Who co-star (in The Time Monster) Ingrid Pitt, as well as Geoffrey Bayldon – famous at the time for Catweazle. The film was headlined by the stalwarts of British horror (though more closely aligned with the Hammer brand) Peter Cushing and Christopher Lee. Horror isn’t generally a genre associated with Pertwee’s name, and his turn as Paul Henderson, an arrogant actor, doesn’t challenge any preconceptions. Pertwee sends the role up delightfully!

Although never a regular member of the Carry On ensemble, Jon Pertwee put his name to four of the long-running farce franchise’s titles. The House That Dripped Blood would have been little challenge to Pertwee, who already had form sending up the horror genre with 1966’s Carry On Screaming!, which is a variation of the familiar Doctor Frankenstein story. He also has a small but memorable part as a soothsayer in Carry On Cleo (1964) and has a fatal run-in with Sid James in Carry On Cowboy (1965). Received wisdom has it that Carry On Colombus (1992), the final film in the franchise in which Pertwee was to appear, is the weakest of the entire canon. Certainly it suffers from the absence of most of the regular ensemble, who, apart from Jim Dale, were all dead by then: but they were never high art or particularly funny – were they?

People of a certain age will remember the cartoon SuperTed from their childhood with great affection. It was made in the mid-1980s, and like kids’ TV of the time (David Jason as Count Duckula and Danger Mouse are other good examples) ensured an A-list cast of voice actors brought the characters to life. Pertwee’s distinctive tones are instantly recognisable as Spotty, SuperTed’s affable sidekick. Peter Hawkins, Victor Spinetti and Shelia Steafel are amongst the other high-profile cast members. Derek Griffiths voiced SuperTed.

This gentle British cinematic farce from 1953 paired Pertwee opposite George Cole (Minder) as two brothers who accidentally find themselves on the wrong side of the law. It’s worth seeing as the part of Detective Inspector Martin, who closes in on the crazy siblings’ shenanigans, is played by none other than William Hartnell. Twenty years later they would appear on screen together again (sort of) in the Doctor Who tenth anniversary special, The Three Doctors.

Perhaps one of the most brilliant, wholesome, and occasionally-terrifying children’s television programmes of all time? It’s made light-hearted and fun by Jon Pertwee’s incredible performance as the daft and affable animated scarecrow, who has a spare head for every occasion. Geoffrey Bayldon, so lovely as Catweazle, is rather more terrifying as the Crowman. Fellow Carry On-star Joan Sims had a semi-regular part as Mrs Bloomsbury-Barton, whilst the late Charlotte Coleman (Four Weddings and a Funeral) played Sue Peters, one of the children. Una Stubbs memorably played Aunt Sally, the object of Worzel’s affections. The show was such a hit that Keith Waterhouse and Willis Hall even turned it into a West End Musical! Pertwee was delighted by the success of the show (1979-1981 and Worzel Gummidge Down Under 1987-1989) and enjoyed pointing out that it enjoyed higher ratings than Doctor Who, the show that by then he had left. Pertwee had wanted the BBC to produce Gummidge, but they turned down the opportunity, and ITV made it into a brilliant success instead. It was a shame, because after The Navy Lark and Doctor Who, Pertwee had established himself as a BBC legend, but he would seldom work for them again after starring in…

Jon Pertwee remains most strongly identified with his role in the iconic BBC science-fiction serial. He was cast as the Doctor in 1969, following Patrick Troughton, and was succeeded by Tom Baker in 1974. Pertwee was altogether more colourful than his predecessor, not merely because his tenure oversaw the transition from black and white to colour. Whereas Troughton had been a short, scruffy, gentle anarchist; Pertwee was a tall, imposing, authoritarian dressed in an array of outrageously elegant velvet smoking jackets and silk capes. The two polar opposite Doctors and actors would share screen time together in The Three Doctors (1973), and later became great friends, though there was always a mock animosity between them that they carried with them onto the convention circuit. The Third Doctor’s stories were mostly earth-bound, and often involved the threat of alien invasion. Pertwee said that he preferred staying on earth than visiting other planets because of the realism the approach engendered. His famous anecdote was that it was more terrifying to come home and find a Yeti sitting on your loo in Tooting Bec.

Pertwee can perhaps be considered the Roger Moore of Doctor Who in that he was always entertaining and rock solid in the part, even where there was a variation in quality. He steadied the ship and brought Doctor Who a much wider following, and when Tom Baker took over in 1974, the new crew built on Pertwee’s success, and arguably even outshone it. Pertwee should have entertained no regrets though. He reigned as the Doctor during a golden age of television, and his return to the show was always warmly welcomed by the public and fans alike. He teamed up with sidekick Elisabeth Sladen for The Five Doctors (1983), and the two, alongside Nicholas Courtney as the dependable Brigadier Lethbridge-Stewart, returned to the radio for the thirtieth anniversary of Doctor Who in 1993, with a less successful follow-up in 1994.

Jon Pertwee threw himself into his life and career, and enjoyed seventy-six years of fun, action and adventure. There can be few people who have lived life more fully than the late, great, and fondly-remembered actor.

His name lives on, not just in his celebrated roles, which continue to thrill and entertain new audiences to this day, but through his son Sean Pertwee, who, as an actor, has arguably outdone his old man, and brings his more introspective talents to multiple roles in the UK and USA. He currently stars in Gotham. We are always heartwarmed to see Sean pay tribute to his late father, and what a more fitting way to honour him than by his choice of Halloween costume? Sean – we salute you. And your father too.