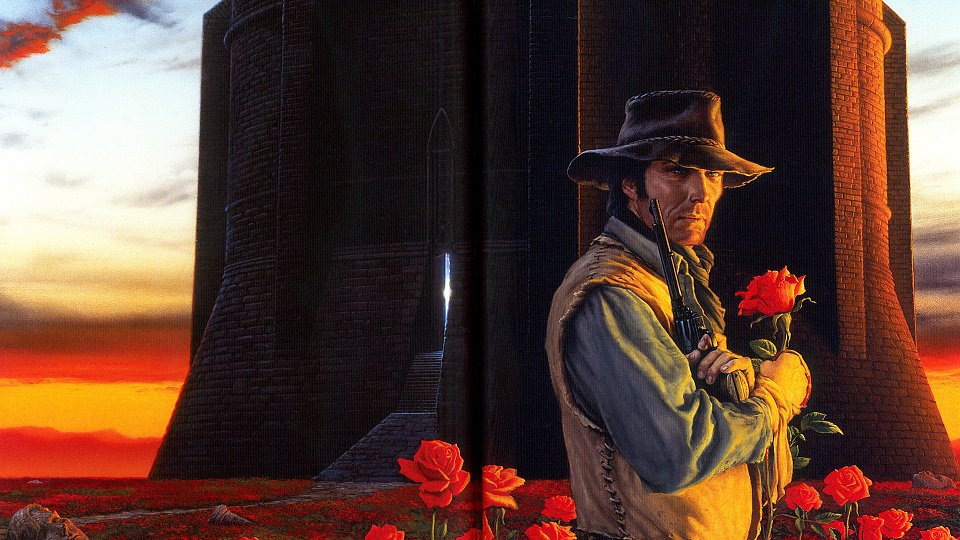 In recent years, some of the biggest and most loved films have been adaptations of bestselling books. From the hugely successful Hunger Games franchise, to awards favourites like Room and Brooklyn, and the fantastic Ridley Scott adaptation of The Martian.

This year we also have a bumper crop of novels making the transition to cinema screens, with the likes of The Jungle Book, The BFG and Fantastic Beasts and Where to Find Them, likely to be among the big hits.

Looking further ahead, not just to the rest of this year, but to 2017 and beyond, here are the five book to film adaptations we can’t wait to see.

It’s been a long time coming, but it seems that a Dark Tower adaptation might finally be happening. Having been in development since 2007, and having passed through the stewardship of such Hollywood heavyweights as JJ Abrams and Ron Howard, Stephen King’s magnum opus is now in the hands of Nikolaj Arcel. Who is he? He is a Danish filmmaker, best known for adapting the original Girl with the Dragon Tattoo, and for writing and directing the exquisite, award winning A Royal Affair.

In short, he has credentials. But bringing The Dark Tower to the screen is no easy feat. It is an almost unclassifiable work of art, spanning multiple styles and genres. It exists initially in a dying mythical western world, but also crosses into the real world at different periods in time. It also crosses paths with events and characters from other Stephen King novels. If that isn’t complicated enough, at certain points the story intersects with the actual real world, where an alcoholic horror writer who lives in Maine becomes a character. Only Stephen King could write something this crazy, and not only make it work, but make it amazing.

Casting has begun, with the formidable duo of Idris Elba and Matthew McConaughey taking the lead roles of Roland Deschain and The Man in Black. Filming has just started this week (confirmed by a tweet from Mr. King himself), with a 2017 release date penciled in for what will be the first in a long series of films, or films and accompanying TV series – if they go with the Ron Howard model. Whatever they do, the first film is crucial. If they nail it, the rest will hopefully follow. If they go and do a “Golden Compass” then it is very likely that one film is all we’ll ever see. No pressure Nikolaj.

If you came of age during the era of the Atari 2600, the NES, the Mega Drive, are a fan of comics and 80s pop culture, and you haven’t read Ready Player One, then what on earth have you been doing? This book was written for you!

Ready Player One is set in a not too distant future, where the majority of humanity has retreated into almost total isolation, and everyone lives their life through a sophisticated virtual platform known as the OASIS. When the eccentric programmer and founder of the OASIS, James Halliday dies, his last will and testament reveals that he will bestow ownership of the OASIS (and the vast fortune that goes with it) to the person that completes an online quest. A quest that is based on Halliday’s obsession with 80s pop culture. When teenager Wade Watts, unlocks the first clue, he soon realises that the entire world is now watching him, and there are people out there, in the real world and virtual one, who are willing to kill for what he knows.

Hollywood were clamouring over this book as soon as they heard about it, with the film rights being snapped up a year before it was even published. The author, Ernest Cline is writing the script, and none other than Steven Spielberg is in the director’s chair. With an unlimited scope for creating worlds, images and characters this promises to be a thrilling and imaginative visual treat. Confirmed cast so far include Olivia Cooke, Tye Sheridan, Ben Mendelsohn, Simon Pegg and current Spielberg muse and all-round acting genius Mark Rylance. The release date has been pushed to avoid getting caught in the wake of Star Wars Episode VIII, so look for this to hit cinemas in 2018.

The Girl on the Train

Not going to lie to you, I did not like this book. Overhyped to the extreme, its tag of “this years Gone Girl” is a gross exaggeration. Other than the word “girl” in the title, there is no real comparison. Written in the first person, from the perspective of three different women, I found them all to be deeply unlikeable characters, self-centred and with indistinctive voices. Were it not for the chapter headings telling me who was talking, I honestly don’t think I could have told them apart.

The titular Girl on the Train is Rachel Watson, a depressed alcoholic, still struggling to come to terms with the end of her marriage. Everyday she sits on the commuter train to London that goes past her old street and finds herself fantasising about the inhabitants. A few doors down from where she used to live are a young attractive couple. She gives them names and imagines what their life is like, projecting the dream life she thought she would have before it all went wrong. Then one day she witnesses something. Something that changes everything.

Now even though I didn’t like the novel, I am very excited about the film for a number of reasons. Firstly, to see how the translation from London to New York works. Will this make it more cinematic? Will this help to transcend the pedestrian source material? Hopefully yes is the answer to both. Secondly, they have assembled a very strong cast, including Emily Blunt, Justin Theroux, Luke Evans, Edgar Ramirez, Allison Janney, Lisa Kudrow, Laura Prepon and Rebecca Ferguson who was the absolute standout in Mission Impossible: Rogue Nation. Can this talented bunch add the depth and empathy that was missing in the book? Again, I certainly hope that is the case. This a great opportunity to see if a mediocre book can be made into a great film. The Girl on the Train is due to be released in October 2016.

Annihilation is the first part of Jeff VanderMeer’s Southern Reach trilogy. The story follows an expedition of four women (a biologist, a psychologist, an anthropologist and a surveyor) into Area X – a strange biological landscape cut off from the rest of the world. This is a classic science fiction premise, but the book itself takes you on a completely unexpected journey. This isn’t just an exploration of a strange land, but a poetic and terrifying look at the way we interact with nature, and the way a landscape can alter us both physically and psychologically.

There are definite echoes of Roadside Picnic, by Arkady and Boris Strugatsky, and of course Stalker, the film adaptation directed by Andrei Tarkovsky. Which to me is a huge positive.

The film adaptation of Annihilation is in the hands of British writer/director Alex Garland, fresh off the success of his fantastic directorial debut, Ex Machina. His cool and stylish aesthetic should marry well with the tone of the book and the internalised emotions. He is assembling a great cast too, with Natalie Portman and Jennifer Jason Leigh in the main roles, with support from the likes of Oscar Isaac, Gina Rodriguez, and the terrific Tessa Thompson, last seen in Creed, and soon to be seen in Thor: Ragnarok. Annihilation will be released in 2017

The Winter of Frankie Machine

If you read a lot of modern crime fiction (like I do) you will be well aware that there is a great deal of mediocre writing in this genre. For every genius like Ellroy or Pelecanos, there are a hundred lame imitators trying to be the next Stieg Larsson.

Then if you’re lucky, you discover Don Winslow. And once you have, you will seek out and devour every word he has ever written. He is an extraordinary writer, and The Winter of Frankie Machine is one of his best.

It tells the story of Frank Machianno, an old surfer dude, who runs a bait and tackle shop in San Diego. However, in his previous life he was Frankie Machine, a legendary mob hitman, connected from coast to coast. When that old life catches up with him, all hell breaks loose.

Sounds a bit like John Wick doesn’t it? Which let’s face it, is not a bad thing. John Wick is awesome. But if Frankie Machine is done right, it will light John’s wick on fire.

There has been talk of an adaptation going back to 2005, when Robert De Niro was circling the part. I think we can all agree that in a post Dirty Grandpa world, we do not want to see De Niro in anything ever again. Let’s just remember him as he was. The current man at the helm however is William Friedkin, the legendary director of The Exorcist, The French Connection and Killer Joe. He is a terrific choice for the material. With Friedkin, you know that there will be no compromises made with the material. Most importantly of all, he plans to cast Matthew McConaughey as Frankie. This project is still in its early stages, but keep your eyes peeled for a 2018 release. In the meantime, read the book. You’ll love it.

In this article:Annihilation, Ready Player One, The Dark Tower, The Girl on the Train, The Winter of Frankie Machine