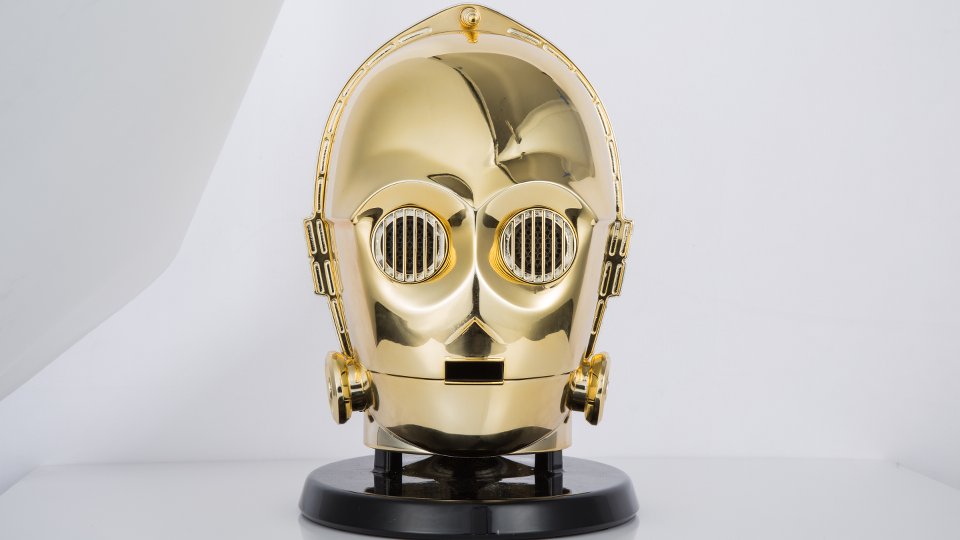 With last year’s Star Wars: The Force Awakens smashing box office records across the world, it was inevitable that Star Wars fever would take over every where you look. From action figures to branded merchandise of every conceivable type, I shouldn’t have been surprised when it was announced that two Star Wars Bluetooth speakers were being released. Even more they are fully licensed but my initial fear was that the speakers would be style over substance. In an already crowded market, with varying results rarely determined by price, Bluetooth speakers are in abundance so can these Star Wars speakers stand out?

The Star Wars Bluetooth speakers come in two designs – C-3PO and a Stormtrooper – and they retail around the £130 mark each, which isn’t particularly cheap for one speaker. For the purposes of this review I had the pleasure of enjoying the C-3PO speaker, which is almost life size. The first thing you notice about the speaker is the incredible level of detail and it truly does look like the real thing. The quality of the product is outstanding and it’s no surprise that Star Wars fans would love to have C-3PO stood on their mantelpiece blasting out some music.

Once the wow factor from the design starts to wear off, you can start to evaluate the speaker for it’s main purpose rather than its remarkably attractive look. Pairing with the speaker is super easy and every time you pair C-3PO’s eyes and mouth light up and a line of dialogue along with a snippet of the Star Wars music comes out. So far, so amazing. The speakers are located in the eyes of the model and my initial thought was that the sound would be tinny and disappointing. I couldn’t have been more wrong.

The quality of the speaker’s output is magnificent. I would go so far as to say it’s one of, if not THE, best Bluetooth speaker I’ve used. I put it through its paces playing bass heavy tracks from the likes of Jennifer Lopez through to the Country twang of Luke Bryan and the pop joy of Gwen Stefani. No matter what genre of music I played through the speaker, the clarity was crystal clear and the sound remarkably warm.

On the front of the base are a series of button that allow you to change the level of bass, and the volume. For once this is a speaker that actually give you clearly decipherable levels of bass when you press the buttons. To be honest I didn’t need to play with the bass too much but it definitely made a difference and I was impressed.

The two areas that really impressed me were the Bluetooth range and the diffusion of sound. In terms of the Bluetooth I had no problem walking round pretty much the entire house while paired and the connection didn’t cut out. During one session with the speaker, which was located in a middle room in the house, I walked to the end of my lengthy garden with my phone in my pocket and the music still carried on. I’ve yet to find a Bluetooth speaker with a better range.

The diffusion of sound is incredible. I’ve reviewed many Bluetooth speakers and the most common problem is directional sound. I would have put money on that being the biggest issue with the speaker and had I done so I would have lost. The sound is warm and fills the room. I had the speaker in the dining room facing away from the kitchen while I played music through it and prepared dinner. It sounded fantastic. There was no change in the quality of sound at all and I turned it to a variety of angles to double check and the diffusion of sound was brilliant.

Nice extra features on the speaker included an aux input so you can connect wired devices if you wish and the ability to receive calls through it. You can also pair up to two Star Wars speakers with one device so you can get one of each design and give yourself a fantastic audio setup.

Try as I might I have absolutely nothing bad to say about the Star Wars C-3PO Bluetooth speaker. Everything about it is seriously impressive and for the price point it’s easily the best Bluetooth speaker I’ve discovered yet. The remarkable design is definitely a bonus (and likely a big draw) but you should buy this speaker for its unrivalled audio quality. If there were a speaker out there that is a better buy than this one, I’d love someone to tell me about it. I suspect no other speaker in this price range will come even close. The force is most definitely strong with this one.

Advertisement. Scroll to continue reading.
In this article:ACW, Star Wars