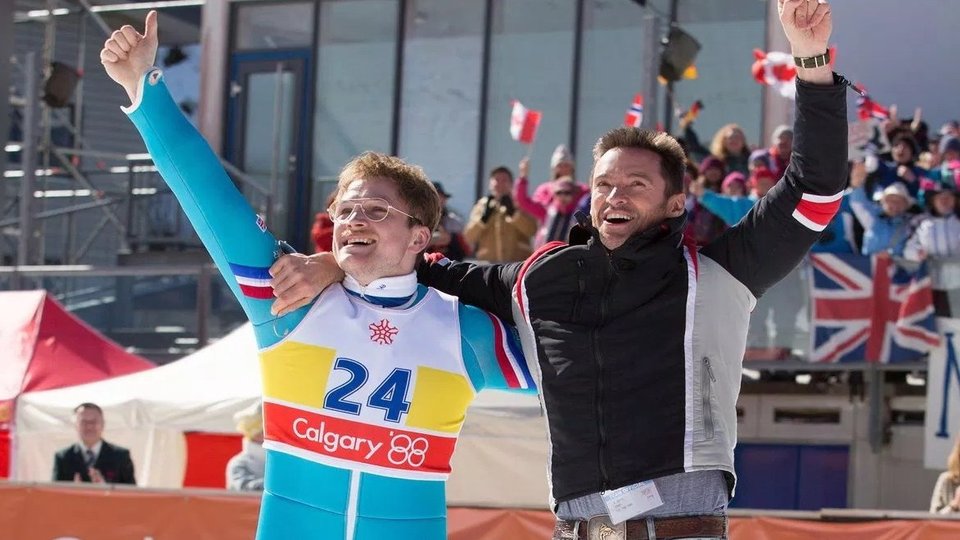 Anyone who remembers the exploits of Eddie ‘the Eagle’ Edwards during the 1988 Winter Olympics will no doubt look back on the events with much fondness. It was an inspiring tale and one that captured the hearts of a nation. A biopic of his life isn’t the most obvious choice for a feel-good comedy but kudos to writers Sean Macaulay and Simon Kelton for creating such an engaging story. This is all wrapped up nicely by director Dexter Fletcher, who creates a champion underdog movie that will resonate with practically everyone.

Young Eddie Edwards (Taron Egerton) dreams of competing at the Olympics but a natural skill set eludes him in most sports. When inspiration takes hold, Eddie decides that his fate lies with the Winter Olympics and goes about training for the 1988 event. Facing constant bureaucracy and deemed a joke by his own governing body, Eddie is refused entry to compete. But this doesn’t stop him and he perseveres on his own as an independent athlete. This soon connects him with Bronson Peary (Hugh Jackman), a former ski jumper who has shunned the sport. Together they take on the astronomical odds set up against him, so Eddie can realise his dream and capture the attention of the watching world.

Taking quite a bit or artistic licence with the onscreen story, the character of Bronson Peary is made up. Being an amalgamation of various sources of inspiration and help to Eddie over the years, the filmmakers have decided to combine all of these influences into the cantankerous character of Peary, played exceptionally well by Hugh Jackman. The real success of the film lies with the chemistry between these two oddballs from different sides of the spectrum. Jackman and Egerton are a joy to watch together and their friendship and student/teacher dynamic creates the central heart of the film.

Taron Egerton’s physical transformation is remarkable, in that he nails the appearance of the 80’s bespectacled hero with no use of prosthetics. It’s a challenge that he passes with flying colours, delivering one hell of a performance that perfectly captures the real spark of magic that Eddie Edwards had. Elsewhere, there are strong cameos for Keith Allen as Eddie’s sceptical Dad and Christopher Walken as Jackman’s old teacher.

Eddie the Eagle is a guaranteed winner at the cinema, providing a light but inspiring take on the story. The action is also shot exceptionally well, really placing the viewer firmly in the ski’s as the jumps take place. With Egerton and Jackman on fine form, this will delight anyone looking for a feel-good comedy with lots of highs. With the real Eddie Edwards heaping praise on the movie, Eddie the Eagle gives viewers a wonderful message that perseverance and determination is always a winning combination in life.