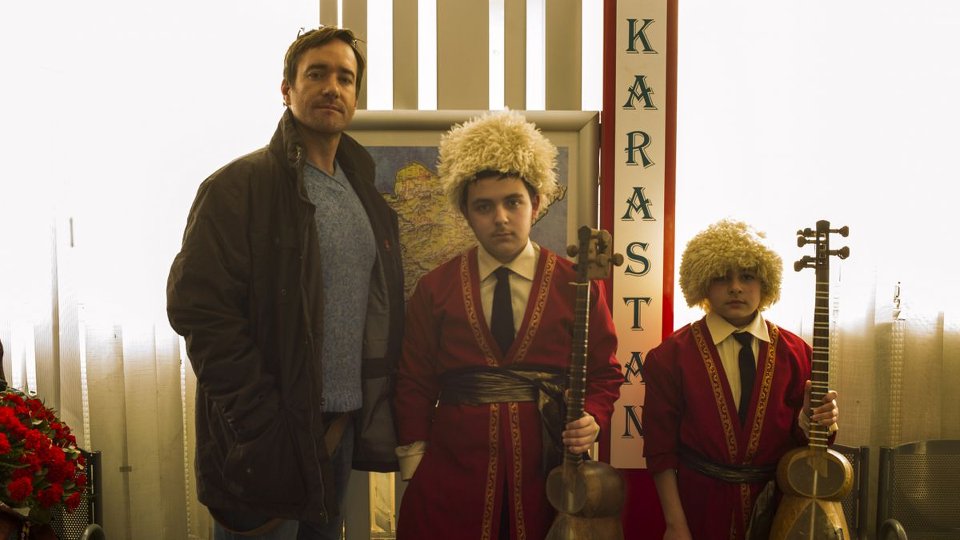 Lost in Karastan was made in 2014, but was only released this year. That immediately sets the alarm bells ringing. Starring Matthew MacFadyen as film director Emil Forrester, a former award winner, now reduced to lying in the dark listening to self-help audio books on how to recapture the muse. He is given the opportunity for this when he is unexpectedly invited to the inaugural film festival in the fictional country of Karastan, which as a promo-reel for the country repeatedly exclaims, “is the land of inspiration.”

Emil thinks he has been invited to introduce a retrospective of his films, but he is actually there because the corrupt President (Richard Van Weyden) wants him to direct the epic tale of Karastan’s mythical founder. The President claims to be from the same lineage as this legend, and therefore believes this movie will cement his grip on the nation.

Along for the ride are Chulpan (MyAnna Buring) the seductive liaison between Emil and the President, and Xan Butler (Noah Taylor), the least convincing washed-up Hollywood action star you have ever seen.

The press release for Lost in Karastan draws comparison with Duck Soup and The Great Dictator. Back in reality, it doesn’t even compare to Jewel of the Nile, which let’s face it has pretty much the same plot. In fact, if it had even half the laughs of Jewel of the Nile that would be something. But it doesn’t.

I’m just not entirely sure what the point of this film is. As a satire on mainstream filmmaking it is decidedly weak, with nothing more pointed than “it’s all superheroes and sequels.” Ooh take that Hollywood. Equally the film says nothing even vaguely revelatory about despotic leaders.

The lives of the people of the Karastan are so thinly drawn it is impossible to care about their plight – whatever it may be. Just what is exactly is this President doing? He just seems to be a vain prick, forcing a vain director to make a vanity project. Not exactly Idi Amin.

This film just fundamentally does not work. It is not funny or insightful, and there’s just nothing at stake. (SPOILER ALERT) Late in the film, Chulpan is revealed to be a double agent, working for both the president and the rebels. This should be tense, exciting and full of suspense. Yet at no point does her life ever seem to be in peril. The truth is revealed. She escapes. Oh.

Perhaps even more disappointing than the lack of stakes, is the lack of any sort of catharsis. No one learns anything in this film. When (MORE SPOILERS) Emil flees Karastan fearing for his life, the film is in tatters and his career is over. Back in the UK he now works at a DIY store. The President tracks him down and asks him to come back and finish the film. He jumps at the chance. So has he learned anything? Has anyone changed at all? The answer is no. So again, I ask, what was the point?

In this article:Lost in Karastan, Matthew Macfadyen