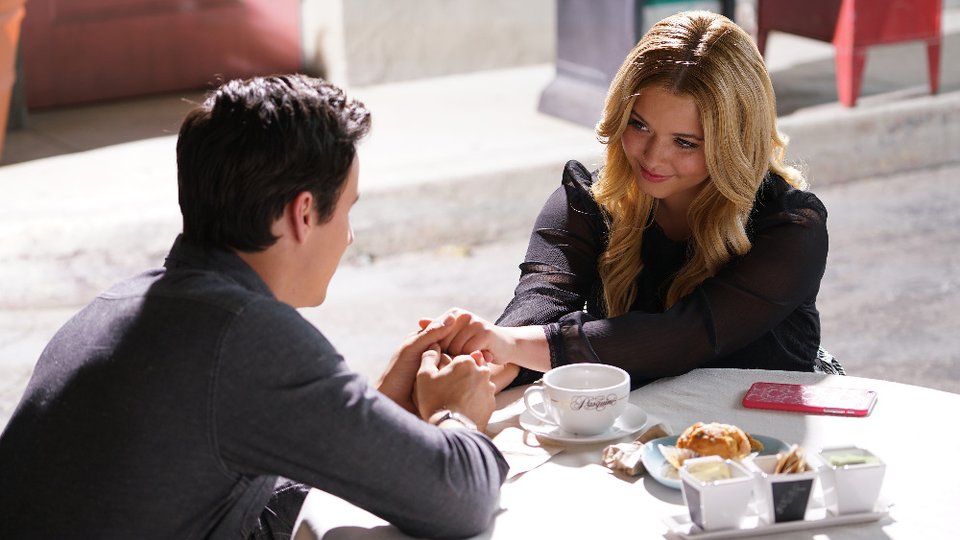 Love was in the air on this week’s Pretty Little Liars despite A’s latest attempts to rattle the Liars.

If you haven’t seen the latest episode of Pretty Little Liars and want to avoid spoilers you should stop reading now. If you have seen it and want to relive all the action keep reading.

Hole in the wall

Emily (Shay Mitchell) and Hanna (Ashley Benson) took Alison (Sasha Pieterse) to The Radley to show her the hole in Sara’s (Dre Davis) closet wall. When they arrived, they were surprised to find that the hole was no longer there and the trio had to hide in the closet when a maid arrived to clean the room. They managed to make their escape without being caught but it seems that the maid was really A in yet another mask.

Aria (Lucy Hale) got herself into quite the mess this week as she told Ezra (Ian Harding) the truth about his book and got caught out by Liam (Roberto Aguire). First up was Aria coming clean to Ezra and his reaction wasn’t quite what she expected. He asked to read the chapters that she’d written and told her that what she did was an act of love. Is there still hope for Ezria? I hope so!

Liam meanwhile was still in town and ran into Ezra. The two shared a brief exchange and Ezra let slip about his past with Aria, which was quite clearly news to Liam. As Aria arrived Liam stormed off telling her he knew that she and Fitz were more than teach and pupil, and asked why she never told him.

Spencer (Troian Bellisario) told Veronica (Lesley Fera) that she knew about her battle with breast cancer and convinced her to go on TV to tell the world before the opposition could reveal the information. Unfortunately as Veronica was giving a heartfelt speech, news leaked that Yvonne (Kara Royster) had an abortion when she younger (a bit of a problem for her pro life campaigner of a mother) and the leak was traced to Spencer’s IP. Caleb (Tyler Blackburn) took the blame for the leak and Veronica threw him out of the house. Before he left, he swore to Spencer that he would find out who had leaked the information and framed Spencer for it.

Melissa Hastings (Torrey DeVitto) was back in town and like a bad smell she refused to go away. Following last week’s revelation that the pull-out handle from her suitcase, which matched the murder weapon, was missing, Spencer and Caleb tried to talk around the subject with Melissa. Caleb caught her in a lie and started to believe that she could have had something to do with Charlotte’s (Vanessa Ray) murder. This was further supported by Hanna revealing that she had bumped into a drunk Melissa in London a few years earlier and she was raging about Charlotte. Melissa snatched Hanna’s phone and tried to call Charlotte at the hospital, but Hanna took her phone back and stopped her.

Aria was asked by Byron (Chad Lowe) to officiate his wedding with Ella (Holly Marie Combs). After she refused, Byron revealed that Mike (Cody Christian) didn’t support the marriage and she quickly changed her mind. Hanna was hired to find Ella a dress and to organise the ceremony but spending time with Ella made Hanna realise that maybe her feelings for Caleb weren’t truly gone after all.

At the wedding Aria conducted the ceremony and after her parents were married once again, she talked to Liam and told him that she had worked her feelings out. It seems for now that Aria and Liam are back together.

Someone else in the mood for love was Alison who went public with Dr. Rollins (Huw Collins) about their relationship. She admitted that she felt responsible for Charlotte’s death because her romance with Dr. Rollins had been a betrayal of trust. A text message from A seemed to point the finger at her too. However, the good doctor persuaded her that he was at fault and the two enjoyed a little date that turned into a marriage proposal. Ali accepted the loved-up couple arrived on Aria’s doorstep asking her to marry them.

Poor Emily had another rough week. Following a delivery of baby books with a threatening note from A, she continued to worry about her eggs, which were stolen from the clinic. She was then befriended by Damian (Blake Berris) unaware that he was a journalist that had rattled Spencer and Melissa about their mother’s campaign and the murder of Charlotte.

Turning investigator, she headed to the diner where someone had called Charlotte from on the night of her death, and found it was closed. As she peered through the windows, someone appeared in a truck and tried to run her down. She managed to keep out of the way but dropped her phone, which was destroyed. To keep safe she climbed on top of a storage unit and there she found the missing part of Melissa’s suitcase. The person in the truck rammed the storage unit causing Emily to drop the suitcase part, which they promptly picked up and left with.

Pretty Little Liars continues 8/7c Tuesday on Freeform in the US and Wednesday on Netflix in the UK. Preview the next episode Burn This below: