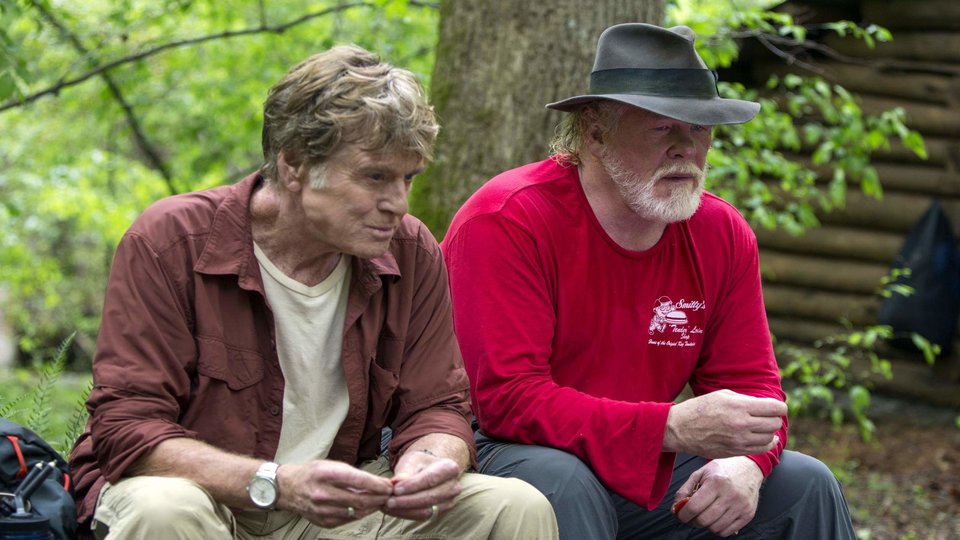 Celebrated travel writer Bill Bryson (Robert Redford), having spent years living in the UK, decides that the best way to reconnect with his homeland of the USA is to hike the Appalachian Trail. His wife (Emma Thompson) is not best pleased with the idea and insists that he has to take someone along for the ride. Enter Stephen Katz (Nick Nolte), one of Bryson’s oldest travelling companions whom he has lost contact with.

A Walk in The Woods is an utter joy from start to finish as we follow Bryson and Katz through many hilarious situations and landscapes on their journey of self-discovery. Bill Bryson’s books have been worldwide best-sellers so it’s nice to get this big screen adaptation. It provides the perfect mix of comedy, adventure, self-reflection and even tinges of drama, to make for a very satisfying trip to the cinema and a refreshing break from the norm.

The magnetic Robert Redford hands in an accomplished turn as Bryson and manages to make the role his own. Shunning the usual glitz and stature associated with him, it’s nice to see Redford have some earthy fun with a project that he clearly relishes. The grizzled Nick Nolte is perfectly cast in A Walk in the Woods and gives the film a fantastic energy. His chemistry with Redford is the films biggest asset, with the two acting heavyweights making everything seem so effortless onscreen. They ensure that this is a hilarious comedy with plenty of heart too.

The supporting cast are all great too with Kristen Schaal stealing her scenes as a rambunctious fellow traveller who spends part of her journey travelling alongside Bryson and Katz (much to their annoyance). The always-reliable duo of Emma Thompson and Mary Steenburgen dutifully oblige once again and Nick Offerman has a nice cameo at the start.

With life-affirming laughs and plenty of splendour, this is a rare treat with two screen legends on cracking form. The story will carry you on a very enjoyable, picturesque journey whilst the comedy leaves a lasting impression thanks to all of the talent involved. It’s an affecting ode to travelling and friendship that makes you want to grab a backpack and go exploring. All in, this is a movie that does Bill Bryson’s seminal book real justice.

Watch the trailer for A Walk in the Woods below: