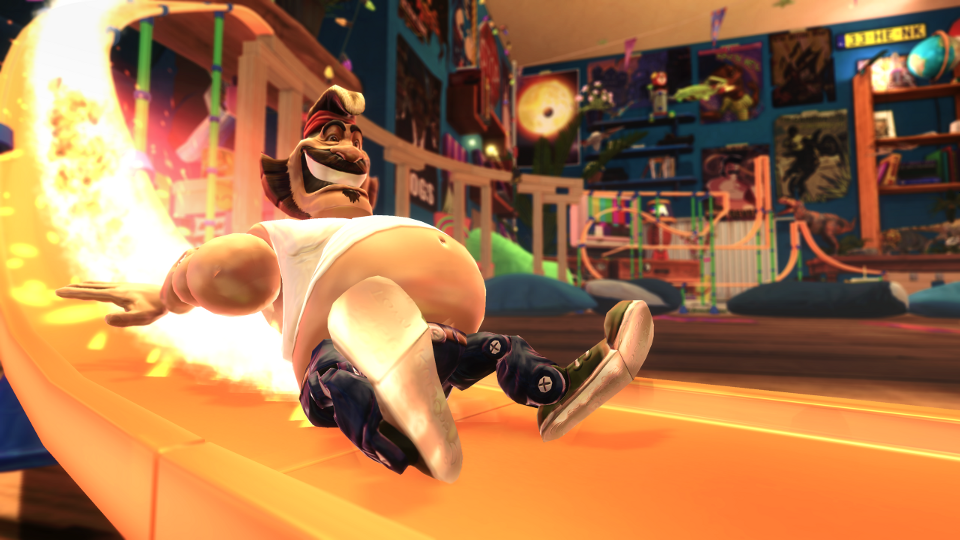 If you took Trials HD, Sonic the Hedgehog and Toy Story and threw them into a blender you’d probably end up with something a bit like Action Henk. The game is a speed platformer created by RageSquid and was first released on PC last year. I’ve been spending some time with the game ahead of its console debut on Xbox One and PS4 next month.

The idea of the game is simple, your aim is to get from the start of a level to the end as quickly as possible. You play as one of a selection of action-figures starting off with the beer-bellied Henk. Other characters are unlocked by defeating them in challenging head-to-head boss races throughout the game.

Characters are easy to control with just a couple of moves to learn. The left thumbstick makes you run left or right, there’s a face button to jump and the left trigger makes you do a butt-slide. Getting through the levels is fairly easy, at least at the beginning of the game, but beating them as fast as possible is the real challenge.

To maximise your speed through a level you need to time your jumps and butt-slides to perfection. A mistimed jump or butt-slide tends to slow you down massively. You can jump different heights based on how long you hold the jump button and butt-slides should be reserved for when you are going down a slope. There are also a few more complex moves to master such as wall jumps, loops and half-pipe style obstacles where you need enough momentum in order to escape them.

The 70-plus courses are set in 10 different environments and the toy-box style world looks great. It’s all very detailed, nice to look at and at times provides little distractions to try and put you or your opponents off.

The racing is intense and the controls feel just about right. When you’re trying to beat your personal best times the retry feature is brilliant. So many games mess up by forcing you to sit through a loading screen but here you are instantly back at the start. This makes it very hard not to just have one more go or restart the moment you make a mistake.

A neat feature when trying to improve your times is the inclusion of ghosts. There are ghosts of the par times for the different medals and you can also race against your best attempts. Often racing a ghost can give you a clue of where you need to improve on a particular run.

A big plus for the new console version is the inclusion of split-screen local multiplayer for up to 4 players. Against friends it’s so much fun and as you’re all on the same machine and screen there is no unfair lag disadvantage.

For a multiplayer session you can create a list of courses to compete on. There are also settings allowing multiple races on each course and the ability to allow checkpoints. Multiple tries lets everyone have a chance as they get to learn the courses. Checkpoints make things a lot easier and allow you to rejoin the race after making a mistake.

I’ve really enjoyed my time with Action Henk and so far it’s shaping up to be a really fun speedrunner. At times it can be infuriating but the instant retry makes it so addictive to just want to have another go. If you enjoy platformers and chasing leaderboards then Action Henk should keep you busy for hours.

The PlayStation 4 version of Action Henk will release early March with the Xbox One version set for March 4th.

Check out the trailer for Action Henk below: