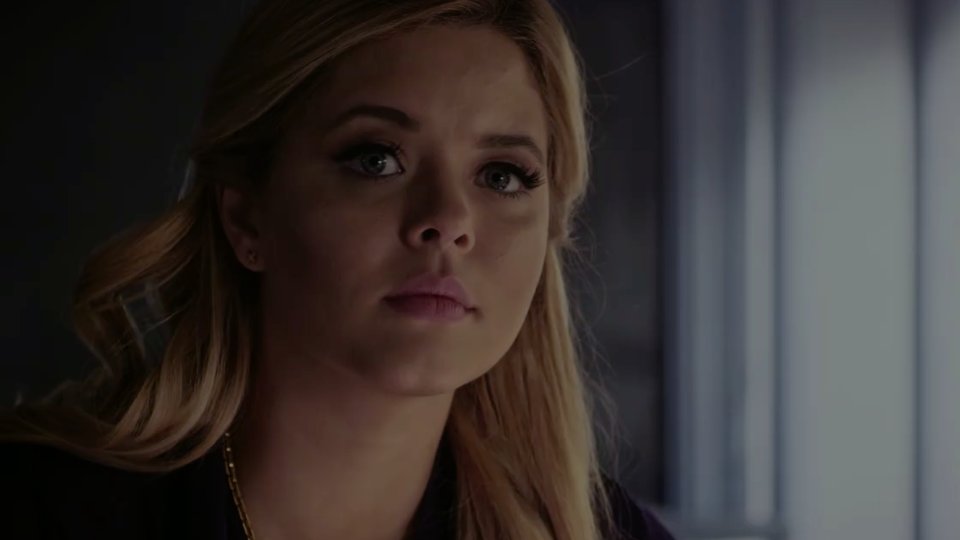 Sara Harvey (Dre Davis) was the name of everyone’s lips this week on Pretty Little Liars but is she really behind the latest texts the Liars are receiving?

If you haven’t seen the latest episode of Pretty Little Liars and want to avoid spoilers, stop reading now. If you have seen it and want to relive all of the action keep reading.

Aria (Lucy Hale) arrived home to confront Byron (Chad Lowe) following his mysterious message and the information she was given wasn’t at all what she was expecting. Turns out Byron and Ella (Holly Marie Combs) have been sneaking around together and have decided to give their relationship another try. A shocked Aria was later cornered by Ella who detected something was wrong but during a heart-to-heart it appeared that Byron couldn’t have killed Charlotte (Vanessa Ray) as he was with Ella all of that night.

Hanna (Ashley Benson) spent the episode being threatened by new A who wanted her to hand over the stolen drive with the security footage on. Suspecting that Ashley (Laura Leighton) had stolen it, Hanna confronted her mother but got nowhere. After Ashley went to work, Aria arrived to help Hanna ransack the house for the drive but they didn’t find it.

Hanna’s next port of call was to ask Caleb (Tyler Blackburn) for help and he supplied her with a dummy drive so that she could make the drop and get A off her back (temporarily at least). During the drop Hanna was called by her nightmare boss, who requested that she get to New York asap.

On arrival Hanna found out that she had been replaced and no longer had a job. She argued with her boss who offered her a secondary assistant job and Hanna told her where to shove it. Fearing she’d committed career suicide, Hanna jumped into a car with Jordan (David Coussins) and told him to keep driving.

At the end of the episode A plugged the drive in to a laptop and a video of Caleb popped up telling A that the rules were changing. Once it ended a virus was unleashed that rendered the computer useless.

Spencer (Troian Bellisario) was surprised to find that she had a lunch appointment with Yvonne (Kara Royster) that she wasn’t aware of. Arriving at the lunch, she discovered that the meeting had been set up by A but she decided to act as if everything was normal to see if she could get to the bottom of who was messing with them. Spencer and Yvonne had an enjoyable lunch and after Yvonne picked up the cheque, she left in a hurry leaving her phone behind on the floor.

Taking the phone to Caleb, Spencer was surprised to find Hanna in the barn with him and there was a little awkward atmosphere between the three. After Hanna left Caleb cloned Yvonne’s phone and Spencer then returned it to the restaurant where she was greeted by Mona (Janel Parrish). Suspicious of Spencer’s actions, Mona told her she wouldn’t tell Yvonne that it was Spencer who handed her phone in to the lost and found.

Meanwhile Caleb spent time searching through the contents of Yvonne’s phone and found a password protected file about Spencer on there.

The road to Emison?

Emily (Shay Mitchell) hid out with Hanna at Lucas’ (Brendan Robinson) apartment as she prepared to donate her eggs. In the run-up to the procedure Emily was contacted by Alison (Sasha Pieterse) and then later Dr. Rollins (Huw Collins), who tried to help make peace between the former friends. After realising that she may have done irreparable damage, Alison tried the personal approach and arrived on Emily’s doorstep. She wormed her way back into Emily’s good graces and accompanied her to the hospital for the procedure.

After waking up Emily was seemingly attacked by Sara, who injected something into her system, but Alison assured her that she was hallucinating. The nurse informed Emily that her eggs were successfully retrieved but the couple they were going to no longer needed them as they had unexpectedly become pregnant. Emily asked for the eggs to be donated and after returning to Lucas’ she found a creepy note from A threatening to steal her eggs if she didn’t reveal Charlotte’s killer.

Prior to Alison’s arrival at Emily’s, she was approached by Sara in school who gave her a sob story about doing the right thing to protect herself by lying to the court about Charlotte. A wry smile on her face after her performance suggested Sara is definitely up to no good.

Determined to prove her father’s innocence once and for all, Aria booked herself into the room next to Sara’s at The Radley so she could break in and steal back the golf club. She roped Spencer in to help her (hurray for Team Sparia) and the two girls broke into Sara’s room through the balcony doors. Prior to that Aria saw Sara arguing with Ashley in the corridor.

Once inside the room the girls found a number of fake hands and a variety of gloves. Inside one of the gloves was a map of Radley before it was a hotel. There was also a map of the hotel and when Spencer compared them she realised Sara was staying in Charlotte’s old room. As she continued to search she called to Aria who didn’t respond. Entering the room’s closet, Spencer found a big hole in the wall that revealed a ladder running below the hotel.

Pretty Little Liars continues Tuesday 8/7c on Freeform in the US and Wednesday on Netflix in the UK. Preview the next episode, Where Somebody Waits For Me, below: