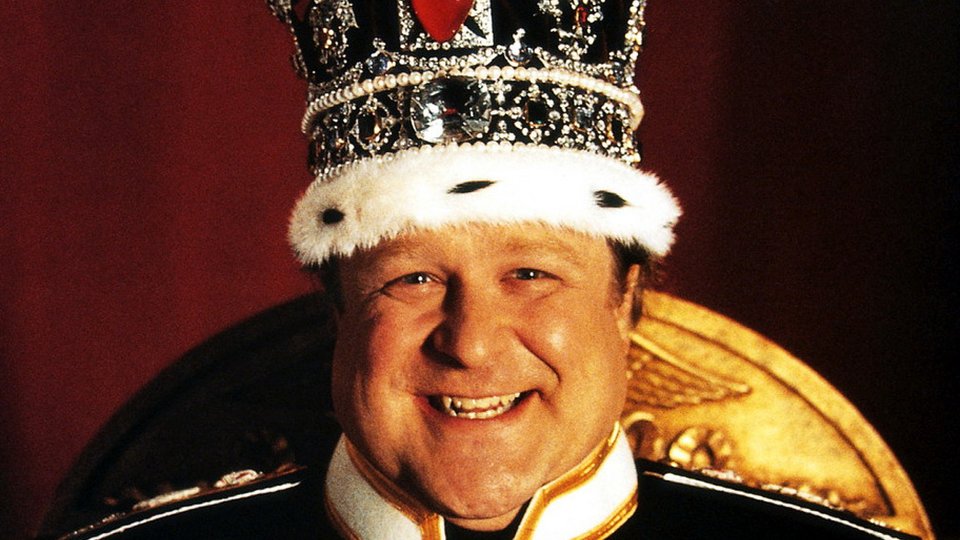 On a popular film-based radio show, someone once said, “there’s no commoner commoner than a colonial commoner.” Within those few words you have the entire premise of this deeply unfunny fish out of water comedy.

Following a tragic – if somewhat unlikely – rain plus metal plus electricity plus photography accident that kills the entire British royal family, a global search ensues for the rightful heir to the throne. The search is led by Peter O’Toole’s droll royal secretary, Sir Cedric Willingham, imbuing every line of dialogue with way more gravitas than it deserves. When his assistant, Duncan Phipps (Richard Griffiths) thinks he has found a potential heir with strengths and weaknesses, but who is (gulp) an American, O’Toole marvellously exclaims: “Quickly Duncan! The strengths!”

The heir in question is none other than Ralph Jones (John Goodman), a Las Vegas lounge singer, or as John Hurt’s sneering Lord Percival Graves puts it, “this song and dance man from the colonies.”

It turns out that Ralph’s wayward grandfather was royalty, and therefore with no other options, he agrees to come to England and claim the throne. I mean, why not? Thus begins the entirely predictable clash of cultures, with the brash American being taught how to be regal by the ever so posh British.

Aren’t Americans loud and vulgar? Aren’t Brits all upper class twits? Isn’t being King such wonderful fun? But oh the pressure and responsibility, I just want to be normal again. Urggh. This film is utter dreck. The only laughs are derived from the line delivery rather than the line itself, and this is of course thanks to the spectacular supporting cast. Goodman gives it his all, but the material is so weak, there is nothing he can do. The big centrepiece performance of “Good Golly Miss Molly” on the harpsichord is truly embarrassing.

My favourite scenes were the ones with the “punks” watching TV through the windows of Rumbelows.

– “Since when do we give a toss about this kind of bullshit?”
– “Shut up, Dysentery! Where’s your sense of national flippin’ pride?”