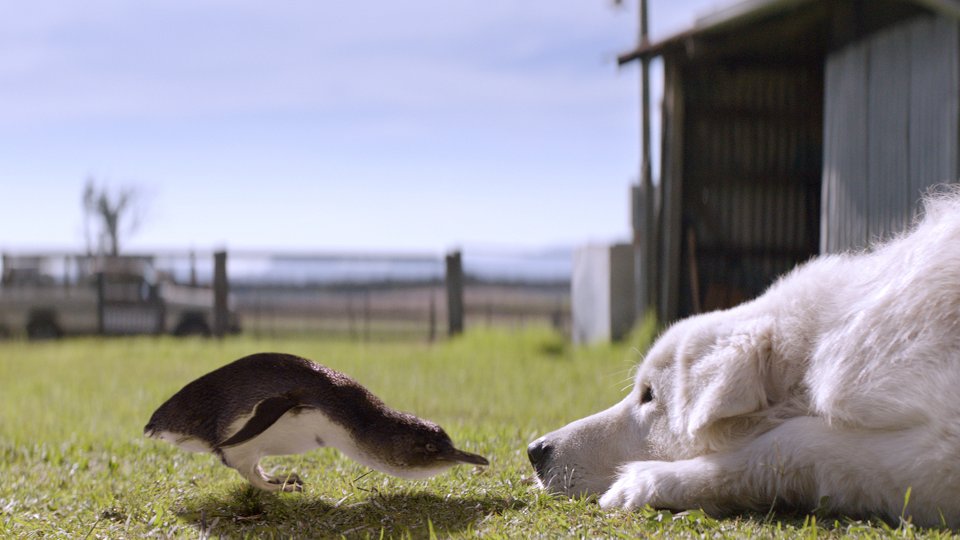 The official trailer has been released for family comedy Oddball and the Penguins along with a new poster and images for the movie.

Already a hit in Australia, where it was shot on the coast near Melbourne, it features up-and-coming Australian star Shane Jacobson (Kenny), Sarah Snook (Steve Jobs) and Alan Tudyk (Frozen).

Off the coast from the small town of Warrnambool lies Middle Island, a sanctuary once home to thousands of the world’s smallest penguins. But since foxes learned to cross the shallow channel to the island, penguin numbers have plunged. And if they fall below ten, park ranger Emily Marsh will be out of a job. This shocks her father, eccentric chicken farmer Swampy Marsh. His wife ran the sanctuary, but when she passed away, Emily stepped in, while Swampy retreated to his farm. Emily’s nine-year-old daughter Olivia is the glue that keeps the family together.

And at the centre of everything is Oddball, Swampy’s rambunctious Maremma sheepdog. After Oddball goes on an off-leash run that nearly destroys Main Street, tensions rise. If the sanctuary closes, Emily plans to take Olivia and move away with Bradley, an American tourism consultant. So now Swampy might lose his daughter and granddaughter as well.

The solution comes when Swampy rescues an injured penguin from the island and discovers to his amazement that Oddball – who can’t bring himself to guard chickens – is an expert at guarding penguins. With two weeks until the final penguin count, Swampy and Olivia devise a crazy plan – train the rambunctious and unpredictable Oddball to protect the penguins and save the sanctuary, while somehow keeping the operation a secret from everyone.

Will Emily discover the truth? What about the suspicious Dogcatcher? And who is the shadowy person trying to make sure the sanctuary closes?

What follows is a rousing adventure as Oddball, Swampy and Olivia manage to save the penguin preserve, their family and the town itself.

Oddball and the Penguins is released in UK cinemas on 12th February 2016. Watch the trailer at the top of the article and see the poster and images below:

Advertisement. Scroll to continue reading.
In this article:Oddball and the Penguins