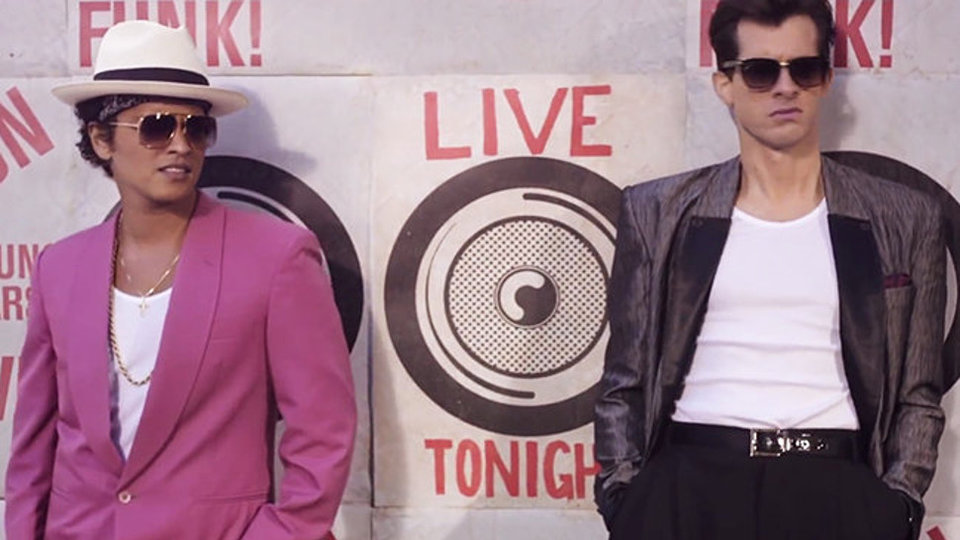 Hello music lovers! Today we are going to celebrate to two pop sensations that are Bruno Mars and super producer Mark Ronson. In case you hadn’t heard the two stars single, Uptown Funk was the UK’s biggest selling single of 2015, which in my books calls for celebration. So I am going to go through my top five favourite Bruno Mars and Mark Ronson videos.

I really like this song and it still gives me goosebumps after all these years. Amy Winehouse’s vocals are simply perfect and the song is just so much fun. Valerie is one of those timeless songs that always makes me want to dance and makes me smile. The song was originally written by indie rock band The Zutons and was the bands biggest single to date. The Zutons released the single in 2006 but Mark Ronson’s version, which hit the shelves in 2007 peaked at number two in the UK singles charts. The video is a lot of fun too and you can watch it below:

Bruno Mars’ Lazy Song really speaks to me as a person, I mean I love my lazy days! I am glad Bruno Mars shares my love for sweatpants and junk food. That aside The Lazy Song is also a damn good track taken from Bruno Mars’ debut album Doo-Wops & Hooligans and reached the top five in the UK. The video is simply brilliant, who doesn’t love dancing monkeys? You can watch it below:

3. Mark Ronson, The Business International – Somebody To Love Me

I love this song and really think it didn’t get enough credit when it came out. Boy George’s vocals on the song are spot on and every time I hear song I think of a sunny day! The video was filmed retro style and the date stamp on it 14.6.82 is actually Boy George’s 21st birthday but the party that is happening in the video is not Boy George’s, who in reality doesn’t appear in the video and neither does Mark Ronson or Andrew Wyatt. The video is below:

Grenade is one Bruno Mars’ biggest singles taken from his debut also. The track reached the top spot in 15 countries around the world. Grenade is a pretty tragic love song and tells the story of a guy, who clearly was too intense for his other half! The resulting song is pretty damn good. The video, which was released in 2010 sees Bruno Mars drag a piano across LA because that’s just how he rolls. You can watch Bruno his instrument below:

There couldn’t be a Mark Ronson and Bruno Mars top five without featuring this monster of a track. Unless you were living under a rock last year you will have heard this and it is good isn’t it? Uptown Funk is pop perfection and gets anyone dancing when it’s on. And let’s not forget about the video, which has some of the best dance moves of any video in 2015 and the colours are spectacular too. In the UK Uptown Funk made chart history when it became the first single to be streamed over two million times in a single week!! It also became the thrid song to reach three times platinum. Unless you’ve been living under a rock you will have seen this video:

Which tracks would you have put in the top five?

In this article:Bruno Mars, Mark Ronson