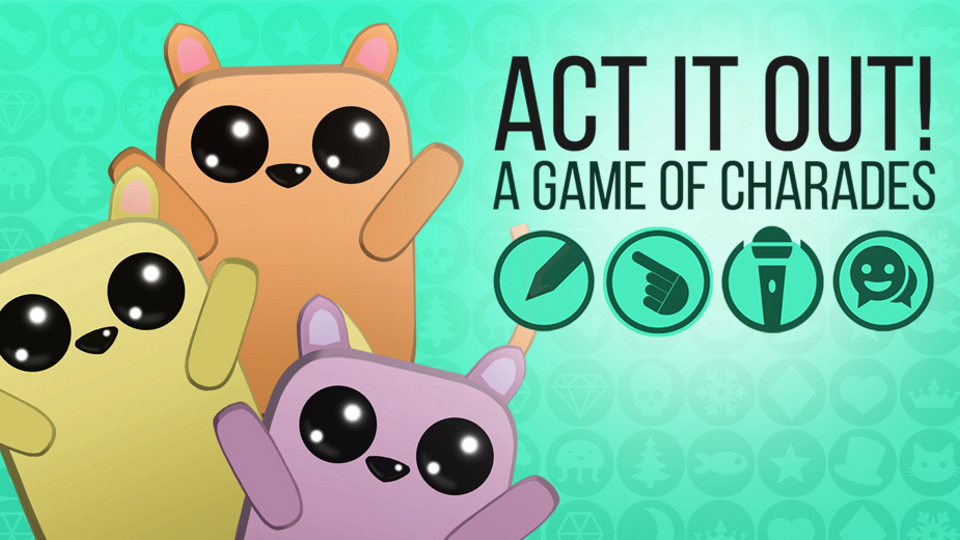 I’m pretty sure that everyone reading this will have played or at least heard of the classic party game Charades. Just in case there’s anyone that hasn’t, Charades is a word guessing game. The basic idea is that one player must silently act out a word or phrase while the others guess what it is.

Charades is quick to learn for all ages. All you need to play is a group of 2 or more people and a pen and paper. Being such a simple game I thought it seemed an unusual choice to bring to console. However for their debut game, Snap Finger Click, have done just that and the result is ACT IT OUT! A Game of Charades for PS4.

ACT IT OUT! isn’t your traditional game where everyone sits around with a controller in order to take part. Instead it’s more of a way of managing a real-life Charades session. Gone is the need for pen and paper or the arguments about who scored what. All you need to play is a single DUALSHOCK 4 controller and a friend. The game does support up to 8 people making it great for gatherings of friends or family.

To get started you choose the number of players and can also enter a name for each player if desired. There are three ways to play individually, in teams or co-operatively as a single group. The co-op option is a nice choice when playing with younger players who might get frustrated at their team losing. You can also choose one of three game lengths from a short 15 minutes up to an hour.

The game lets you know who is performing and that player can choose a category from a selection that includes Film, TV, Books, Theatre, Music, Phrases and Proverbs, Video Games and Lucky Dip. This is another nice touch as you can tailor each game to the players that are present.

The performing player keeps the controller and must ensure everyone is looking away while they reveal to themselves what they need to perform. They then have 2 minutes to act it out and must press a button on the controller when someone shouts out the correct answer.

ACT IT OUT! features over 1,500 words or phrases which is more than enough to ensure that you don’t keep getting the same ones during a single session. I suppose if you play it a lot then you might start to remember them which could give you an advantage over other players.

For an extra challenge there’s an additional Variety mode that throws in singing, drawing and describing into the mix. This really does up the challenge and adds to the fun.

How much you enjoy ACT IT OUT! will be determined by how much you enjoy playing Charades. If party games are your thing then you’ll likely have a lot of fun with ACT IT OUT! If you hate standing up in front of people and making a fool of yourself then it’s probably not for you.

ACT IT OUT! A Game of Charades is a decent debut title for Snap Finger Click. They’ve created a nice easy way to manage your next Charades session. Variety mode with a group of friends after a few drinks is simply hilarious.

ACT IT OUT! A Game of Charades was reviewed using a PS4 digital download code supplied by Snap Finger Click.

In this article:ACT IT OUT, Charades, Party, PS4, Snap Finger Click