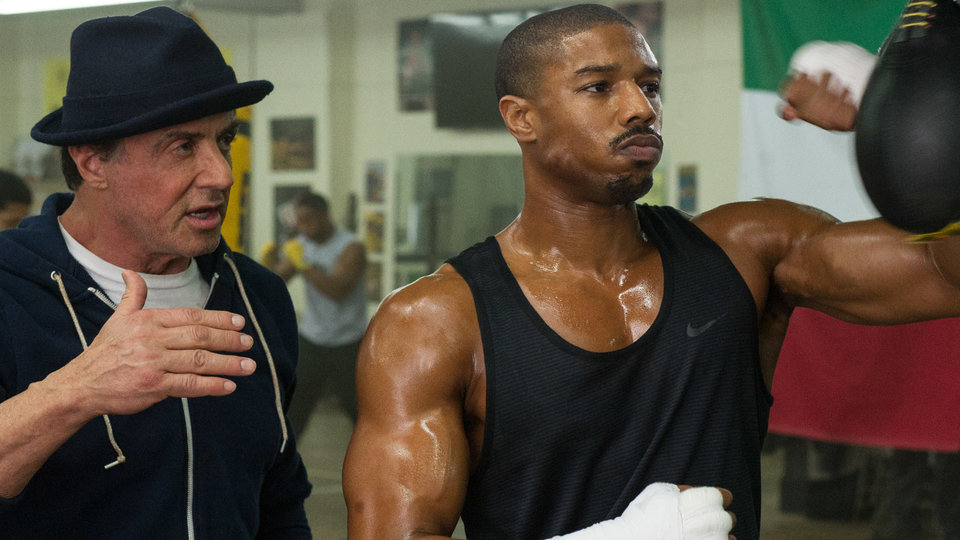 Adonis (Michael B. Jordan) is the illegitimate son of former boxing great Apollo Creed. In foster care until Apollo’s widow managed to track him down and take him in as her own, Adonis has always struggled to find his place in the world. Deciding to quit his job and become a full-time fighter, he seeks out the Italian Stallion (Sylvester Stallone) to help him train for the big time. Before long both men find themselves up against tough odds, as they take on their respective challenges head on.

This seventh movie in the Rocky saga punches fresh new life into the franchise. Director Ryan Coogler reunites with his Fruitvale Station star Michael B. Jordan for this affecting and logical continuation of the story.

Michael B. Jordan is fast becoming one of his generation’s finest actors. Having really impressed in Fruitvale Station and being the best thing in most of his other movies, it comes as a welcome relief so see him take that next step up. He handles the pressure exceptionally well, giving the role of Adonis Creed a believable and engaging edge. He also shares brilliant chemistry with Tessa Thompson as love-interest Bianca. Their story has a lot of mileage left and should a sequel ever happen, their central relationship will play a pivotal role.

As good as Michael B. Jordan is in the film, it’s Sylvester Stallone that really impresses here. Content with how he ended the Rocky saga with Rocky Balboa in 2006, he was understandably reluctant to bring Philadelphia’s greatest son back out of retirement for Creed. But portraying this chapter of Balboa’s life gives Stallone a wonderful opportunity to remind sceptics of what a natural talent he really is. He hands in one of his career-best performances in Creed, and shares a great chemistry with Jordan to create a fascinating dynamic. Stallone also fully deserves all of the calls for a ‘Best Supporting Actor’ nod even though he is up against some stiff competition this year. With a Golden Globe win already in the bag, what better way to cap off his remarkable Rocky legacy than with an underdog Oscar win too?

Coogler has a strong link to the Rocky movies, having fondly watched them with his father. He brings this emotional attachment to the screenplay, which is both well-written and utterly engaging. He gives the film a great visual style that compliments the rich history of the franchise whilst also setting up its own legacy. The fights are filmed superbly, especially the first one that tracks you from the walk down to the ring, through the ropes and into each of the rounds from a fighter’s perspective. Not quite as realistic as the boxing on-show in Rocky Balboa, these fights still do the job and bring a decent level of realism to the table. Having the likes of English pro boxer, former three- time ABA Heavyweight Champion and current EBU (European) Cruiserweight Champion Tony Bellew as boxing champ ‘Pretty’ Ricky Conlan gives the film added authenticity too.

As Rocky echoes in the film, ‘time is undefeated’ and the passage of time we’ve spent with Rocky Balboa is something very special. It’s rare to get any type of longevity in Hollywood today but Rocky proves that great characterisation should be at the heart of every story. Creed furthers this legacy on and delivers a heartfelt, sincere and brilliantly orchestrated story that captures that essence of the original. This is an adrenaline-fuelled ride that hooks you in, jabs your senses and echoes past glories to near perfection. Creed is an emotionally charged world-class knockout that’s an early contender for film of the year.