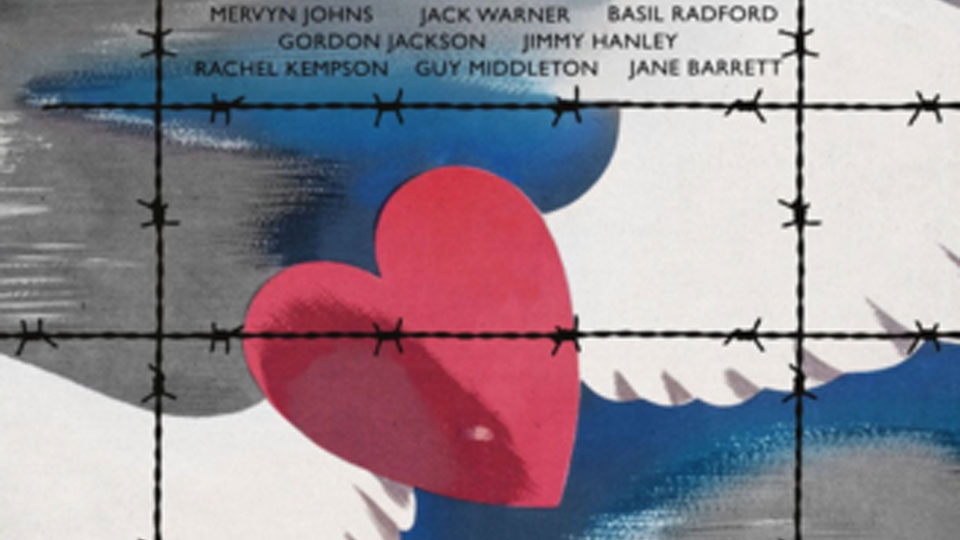 The Captive Heart is a significant film in British history. Released in 1946, it was made almost as soon as WWII in Europe was over. It follows the fates of British prisoners-of-war who are being held in a German camp, and was indeed filmed at a genuine POW camp location. Realism mixes with sentimentality and makes for a powerful and moving drama.

Ealing Studios regular Michael Redgrave (who had already played in Dead of Night and would go on to make The Importance of Being Earnest for them) stars in the lead role as a Czech refugee, Karel Hasek. His real-life wife Rachel Kempson plays Celia Mitchell, who waits back in England for news of her husband. In an excellent twist (and an idea that would be shared years later by the lead character of Mad Men), Redgrave’s character assumes the identity of a deceased British officer, and to keep the Nazi secret police off his back, becomes ‘Geoffrey Mitchell’. The film follows his efforts to keep up his deception, with the British POWs suspecting that he’s a German secret agent, and a particularly malignant Nazi officer who knew Hasek at Dachau coming close to placing him. Hasek writes letters ‘home’, luring Celia Mitchell into falling back in love with a fictionalised version of her dead husband.

Alongside the main, intricately-structured plot, the action also follows and fleshes out the characters of the British POWs, with cuts to some of their wives back home (arguably there’s a touch too much of the latter – whilst it’s an ensemble piece the movie should perhaps have focussed on one central story). Ealing, to their credit, represent different facets of Britishness, with Mervyn Johns (and his screen wife Rachel Thomas) representing the Welsh, whilst Gordon Jackson, who would go on to become a household name for Upstairs, Downstairs and The Professionals, plays another in what would become a very long line of token Scotsman parts, though he brings dignity to a young soldier coming to terms with the loss of his sight.

Basil Dearden’s direction is solid, and the black and white film stock is used effectively to convey the bleakness of life in a POW camp. As well as the multiple storylines leading to an unfocussed structure, the other downside of the movie is that Hasek’s remarkable backstory is perhaps more interesting than the events on the screen. Nevertheless, Michael Redgrave is powerful and magnetic in the lead role. Out of the supporting actors, it’s Basil Radford as the affable English major who steals every scene he’s in.

The film has been digitally restored and is presented in its original aspect ratio. There are a few lines remaining on what is generally a very clean image. An extra feature is a short introduction to the movie by Charles Barr, who presents a different view to the one he recorded in his book on the Ealing Studios films.