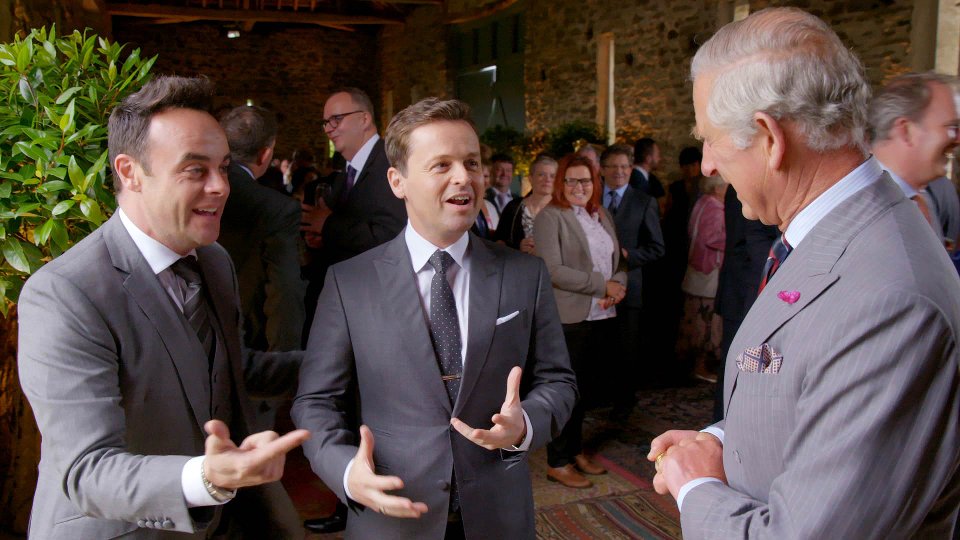 Ant and Dec front a 90-minute special tonight to celebrate the 40th anniversary of The Prince’s Trust.

With extensive access to Clarence House, St James’s Palace and Kensington Palace, the duo talk openly to those closest to His Royal Highness – The Duchess of Cornwall, The Duke of Cambridge and Prince Harry – who tell Ant and Dec what drives The Prince in his work for charity and also share some revealing and funny stories from their lives with The Prince of Wales.

Over the course of the special Ant and Dec join HRH The Prince of Wales on a visit to HM Prison Parc to see with their own eyes the work the charity does there with the young offenders, attend a function at the Prince’s Welsh home near Llwynywermod and, in the private cinema in Clarence House, view some family home-movies of a young Prince with his mother, the then Princess Elizabeth. They also visit Dumfries House, where Prince’s Trust trainees help serve dinner, and get invited to spend the night there with their wives, having sampled a taste of the Royal hospitality.

Ahead of the special tonight, we have two clips to give you a taste of what’s to come. The first shows Ant and Dec paying an emotional visit to the ‘Byker Grove’ castle as they revisit their TV roots. The second shows them talking to fellow Ambassador Cheryl Fernandez-Versini about other routes her life could have taken.

Filmed over a year, When Ant and Dec Met The Prince: 40 Years of The Prince’s Trust provides a unique perspective into the life of HRH The Prince of Wales, his work, his family and the life-changing endeavours the charity does for young and vulnerable people.

When Ant & Dec Met The Prince: 40 Year of The Prince’s Trust airs tonight 9pm on ITV. Watch the two clips from the show below:

In this article:Ant and Dec, The Prince's Trust