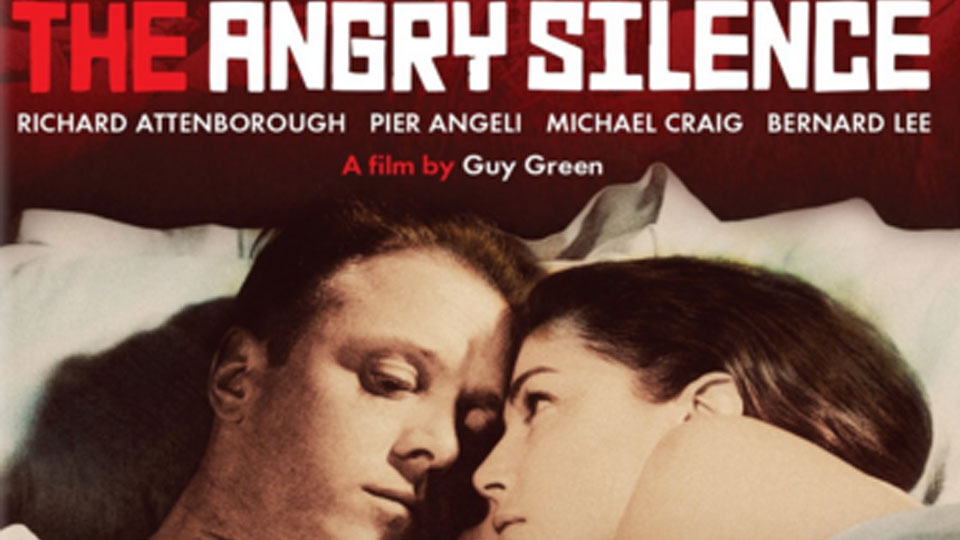 The Angry Silence is a largely successful collaboration between top British talents. Richard Attenborough, who would go on to be a celebrated director as well as actor, is the star of the piece, playing Tom Curtis, a young working class man who, for the sake of his family, crosses the picket line of a wildcat strike. It was written by Bryan Forbes, a Renaissance Man, who was a fine director (we loved his film The Raging Moon) as well as actor and writer. He excelled at crafting intimate, small-scale human stories, and manages the same with The Angry Silence which is a thoughtful, intense piece notable for more realistic dialogue than was usual in films of the time. The Angry Silence paved the way for the likes of This Sporting Life, A Taste of Honey, Saturday Night Sunday Morning and The Loneliness of the Long-Distance Runner. Attenborough and Forbes would co-produce the low-budget black and white movie, such was their belief in the project.

Thankfully, their faith is justified, as The Angry Silence stands up fairly well to this day (long after Thatcher emasculated the unions, and after drastic changes to the dying British manufacturing industry), because Forbes succeeds in bringing out the human story, and Attenborough, having played edgy characters before (his depiction of the psychotic Pinkie in the 1947 movie Brighton Rock is unforgettable) brings a subtle darkness and volatility to Tom Curtis, even though we never lose sympathy for his plight.

The Angry Silence is a great movie for spotting character actors. Alfred Burke is excellent as the manipulative organiser of the strike, and Brian Bedford is suitably cocky as the troubled young man who makes Curtis’s life a misery. Pier Angeli, at the height of her powers when the movie was made, is surprisingly good as Attenborough’s wife, especially in a scene in which she loses her temper with their lodger Joe (Michael Craig) who has sided with the strikers against her husband. The film also features a very young and good-looking Oliver Reed in one of his earliest roles – a sad reminder of a talent that never fully realised its potential. James Bond fans will be pleased to see the original M, Bernard Lee, in a substantial role, playing to his strengths as a slightly pompous and authoritarian manager.

The film strives for a kind of documentary realism, where a touch of hand-held camera work around the strikers captures something of this spirit. An odd appearance by Alan Whicker, playing himself and interviewing the strikers, works against the film’s aspirations towards realism, even though he’s entirely convincing. It feels strangely expositional, and perhaps it might have worked better with an actor playing the interviewer, or by finding another way of communicating the plot elements involved in that sequence to the audience.

Overall, with strong performances and a commendably truthful script by Forbes, The Angry Silence is a fine example of British new wave film, capturing the moral dilemma of a decent man who finds himself alienated by everybody. The resolution is left commendably open (though it’s a touch messy), since the film succeeds in raising questions for which, in 1960, there were no clear answers.

Extras on the disc includes a trailer and an interview with actor Nanette Newman, who, whilst not in the film, was married to Forbes, and she offers an engaging overview of the making of the picture. The only surviving cast member of the top-billed actors, Michael Craig, is also interviewed, and offers his recollections. He’s a useful contributor since Forbes adapted for the screen a story that had been developed by Craig alongside Richard Gregson.