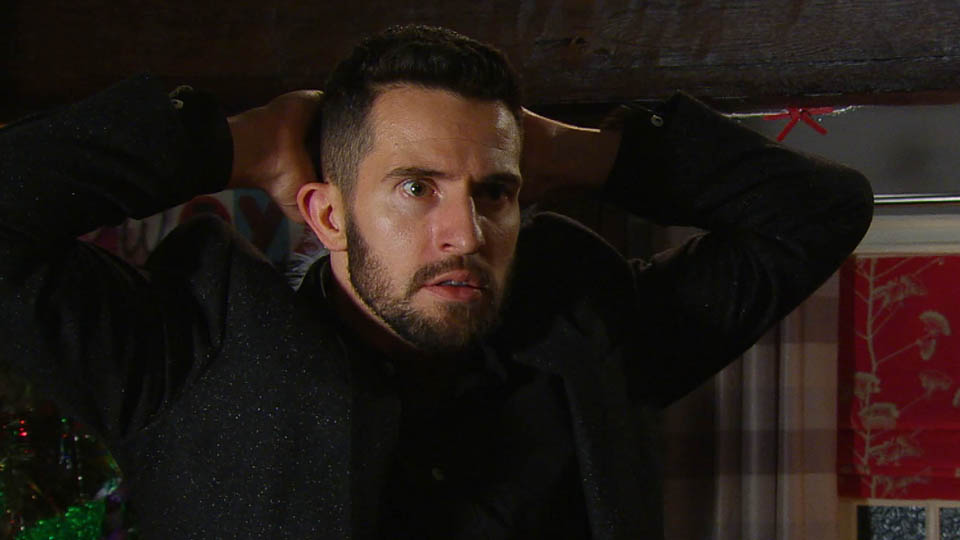 Like many of us Christmas in Emmerdale had it’s heart warming and it’s heart breaking moments, complete with family politics galore!  Just what does the last week of 2015 have in store for our favourite villagers?  Read on to find out…

Ross is arrested for shooting Robert

Ross sees the police pulling up outside the pub and goes in to try and warn Aaron.  DS Hart explains that Aaron’s alibi for the robbery last week, isn’t credible.  Later, she goes to talk to Ross who denies being involved in the robbery, but when she clocks Sarah’s new trainers and then makes another very interesting observation, she’s soon back with a  search warrant.

DS Hart finds evidence that links Ross with the crime scene of when Robert was shot.  Ross tells Debbie he had nothing to do with it and she seems to accept  this, but the pressure is now on him.

With the news about Ross’ arrest, Andy is forced to make an admission to Robert whilst Debbie gives Ross a false alibi for the night of the shooting.  Pete is worried for Debbie as he knows she’s lying as Andy has filled him in on the deal him and Ross made that lead to Robert being shot.  Ross is in for a shock of his own when Robert pulls a gun on him and soon it all comes to a head for Ross and Debbie.

After a visit to see Charity in prison, Debbie decides she has to get out of the village and gives Andy an ultimatum about the kids.  Just as she’s about to set off Ross spots her;  will he let her go and will she manage to take the kids with her?

Although Aaron couldn’t have been less pleased to see his father again, it seems that Chas has had a different reaction.  When Diane finds Gordon’s wallet, Chas is secretly pleased to have an excuse to see him again and the pair meet up.

Later in the week, she even goes as far as faking a hangover so she can meet him again but is left shocked by what he tells her.  They end up talking about what’s happened to them both since their split, but is Gordon telling the truth?  Chas surprises herself when she kisses Gordon and she knows that Aaron isn’t going to be happy.

Lawrence tells Bernice they should have a New Year’s Eve party.  Bernice desperately tries to get people to come to the do, but it seems most would rather stay in the pub.  Feeling vexed, Bernice does her best despite them and the party goes ahead.

With tensions running high between Cain and Joanie and Zak and Lisa, who will end up spending New Year alone and who will be surrounded by support as the villagers finally make their way to Bernice’s party?

Vanessa panics when she sees something on Johnny’s back and calls for the midwife to come over.  She’s a bit thrown by what the nurse tells her.

Cain gives Joanie a warning but will she take any notice?  Kerry steps up as a welcome ally for her.

David is pleased with Eric’s progress as he opens up about not getting the chance to say goodbye to her.

Paddy meets with Tess but the pair end up nearly getting sprung as Paddy has to cover to Rhona.