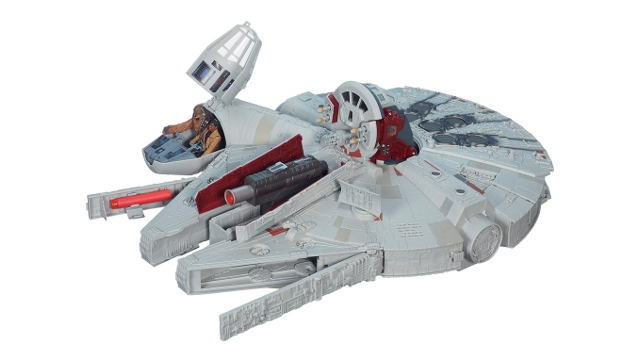 It seems like we’ve been waiting forever but Star Wars: The Force Awakens finally releases later this week.

With Christmas just around the corner, we’ve picked out a selection of our favourite Star Wars products that any Star Wars fan would be delighted to find under their tree on Christmas Day.

Immerse Yourself in the Ultimate Star Wars Experience. Star Wars Battlefront is the ultimate Star Wars battle experience, brought to life by DICE – creators of the award-winning Battlefield series. Fight in epic Star Wars battles on iconic planets and rise through the ranks playing as the heroic Rebellion or the evil galactic Empire. Whether fighting through blaster-wielding troops, or piloting your favorite Star Wars combat vehicles like Snowspeeders, Speeder Bikes, and AT–ST’s – Star Wars Battlefront puts you at the center of the galactic conflict.
PC/PS4/Xbox One £54.99 RRP

BB-8 is the new droid from Star Wars: The Force Awakens and it’s destined to be just as popular as R2-D2. The app-enabled BB-8 Droid by Sphero is as authentic as it is advanced. BB-8 has something unlike any other robot – an adaptive personality that changes as you play. Based on your interactions, BB-8 will show a range of expressions and even perk up when you give voice commands. Set it to patrol and watch your Droid explore autonomously, make up your own adventure and guide BB-8 yourself, or create and view holographic recordings. Click here for more information.
£129.99 RRP

Star Wars Rebels continues the epic tradition of the legendary Star Wars saga with exciting action-packed episodes. It is a dark time in the galaxy as the evil Galactic Empire rules with an iron fist. Imperial forces have occupied a remote planet, ruining the lives of its people. A ragtag band of rebels – Ezra, Hera, Kanan, Sabine, Zeb and Chopper – have taken a brave stand against the ruthless oppression of the Empire in a fight to restore peace and freedom to the galaxy.
DVD £9.99 RRP / Blu-ray £14.99 RRP

Experience the spectacular adventure of Star Wars: The Complete Saga in a way only Blu-ray can deliver. This incredible collection unites all six movies in stunning high definition with the purest digital sound in the galaxy. With more than 40 hours of thrilling special features including three bonus discs, you can journey deep into the Star Wars universe. Feel the Force of Star Wars: The Complete Saga on Blu-ray.
£49.99 RRP

The power of the dark side is strong with the Kylo Ren Deluxe Lightsaber! The weapon of choice for the treacherous new villain in Star Wars: The Force Awakens, this lightsaber combines with other components from the Bladebuilders system (each sold separately) to create incredible new Lightsaber combinations. Features lights, sounds and a Bladebuilders connector.
£34.99 RRP

The Force Trainer II: Hologram Experience allows children to move holograms with their mind. It has ten different levels allowing fans to re-enact famous Jedi challenges to increase their concentration and become a Jedi Master. This product needs a compatible tablet computer in order to work.
£99.99 RRP

One of the evil Galactic Empire’s most destructive vehicles of war, the awesome AT-AT! Send instant or pre-programmed commands to AT-AT via remote control! Use the 10 buttons to program over 1000 action combinations. Bring AT-AT to life with walking action! Command the AT-AT in all directions: forward, backward, left and right Pre-program commands and press go. AT-AT will follow your instructions! Head turns and lights up as it moves! Awesome firing action with lights and sound effects! Dual-joystick programmable infrared remote control. Stands 10.5″ tall.
£129.99 RRP