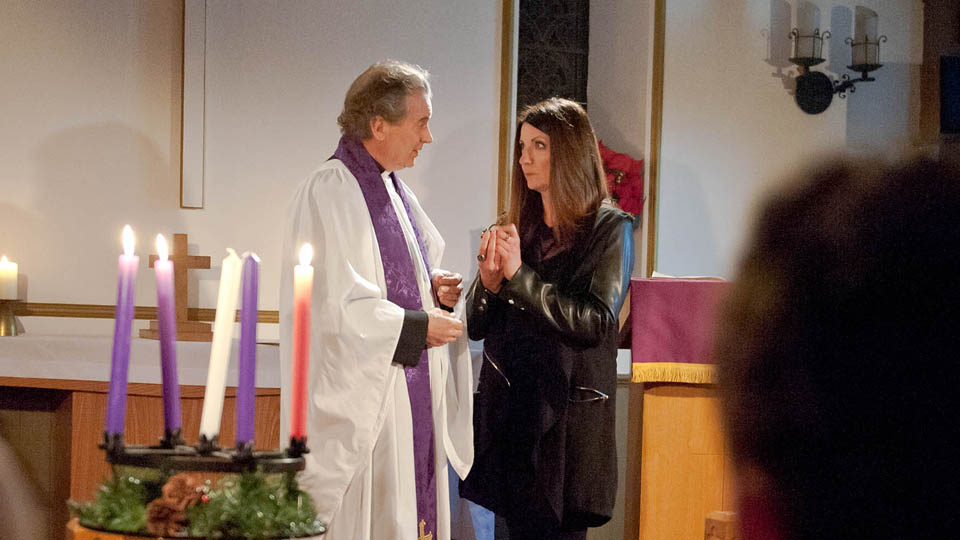 Welcome to our look ahead to what’s happening in Emmerdale this week and there’s a proposal, a new face and the usual dingle drama!

As the church fill for a carol service, Harriet has plans to upstage the singers as she plans to propose to Ashley in front of the congregation.  However, Ashley has confided in Bob that he has plans to split with Harriet to save her having to watch him deteriorate and forget who she is as his dementia gets worse.  Silence descends as Harriet pops the question in the church and everyone awaits Ashley’s answer.

Bob is shocked to see Harriet has taken her things to Edna’s.  Sandy is dumbfounded and questions Ashley why he’s done what he’s done.  Laurel is shocked by the news and her face gives her away to Nicola and she is forced to admit she’s still in love with Ashley.  Nicola decides that she’ll play cupid before the year ends.

As Nicola schemes by inviting Ashley to the Christmas do, Laurel works on a speech she’s been asked to do, but falters when she recognises Mat, the man she met in a bar on a drunken bender months back.  Ashley saves the day and Laurel makes a confession to him only to be shocked when he makes an even bigger one!

As Diane defiantly faces chemo on her one she thinks she recognizes the man sat next to her in the hospital and soon realises it’s Chas’ ex, Gordon.  They get to talking about Aaron and Gordon says he’s had a lot of time to dwell on mistakes he’s made and what he would change if he could.  He asks Diane not to mention that she’s seen him.

Later, Diane is apprehensive as she gears up to visiting Chas at the Mental Health Unit.  Will she keep schtum about Gordon?  Seeing Chas has clearly got her thinking as when she gets back to Doug, Diane makes a big decision.  She organizes a valuation on the pub, but is filled with dread at telling Chas her plan.

Back in treatment for chemo she ends up confiding in Gordon her plans for the pub and he admits he’s thinking of getting in touch with Chas and Aaron and needs her help.  Diane tells him that the timing may not be right and fills him in on recent happenings with Chas.  Will he listen to her?

Ross decides to secretly use Emma to look after Moses despite Debbie forbidding it.  When Pete finds out, Emma begs him to keep quiet, but Pete enjoys having the power over Ross, can he resist stirring?  He drops some hints to Debbie and soon she’s confronting Ross and then gunning for Emma.

Emma is fuming at Debbie for cutting her out of Moses life and goes to see Charity in prison and offers her a deal;  hand over full custody of Moses in exchange for favour.  Does Emma know she’s dealing with someone even more devious than herself?  It looks like she might have figured that out when she is back in the village, drunk and harassing Debbie who is bathing Moses.  Emma shouts abuse at the bathroom window, taking things too far when she enters the house.  Debbie rushes to deal with her and then hears Sarah scream and is horrified when she realises that something has happened to Moses in the bath.

Just what has happened to him and will he be alright?

Joanie’s singing skills land her a gig in the village and draw her and Zak even closer, with the pair sharing another kiss.

Jai is determined to show everyone he’s a changed character now he knows Megan is pregnant and surprises everyone by taking a job on the factory shop floor!

Kerry is scared about her eye operation and slips out of the hospital rather than go through with it.

With David searching the internet for Val’s ring, Lachlan is worried about how he’s going to sell it on without getting caught.