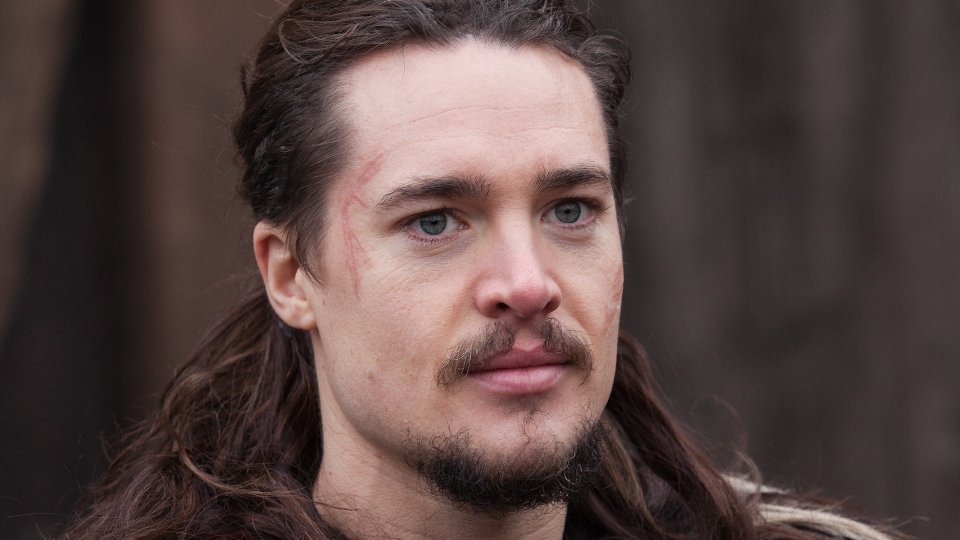 The Last Kingdom aired on BBC Two a couple of months ago and picked up a wealth of critical acclaim.

Based on the Bernard Cornwell novel series The Saxon Stories, the 8-part historical drama is released on Blu-ray and DVD in the UK today. Featuring a stellar cast led by Alexander Dreymon (American Horror Story: Coven), The Last Kingdom is packed full of action, romance and plenty of drama.

To celebrate the release of the first series, we caught up with Alexander to find out more about it. In our interview we talk about the premise of the show, discuss Alexander’s chemistry with his co-star Emily Cox, and find out if the show will be returning for a second series.

What is The Last Kingdom all about?

It’s about the fight between the Danes who attack as Vikings and the Saxons. At the time England didn’t exist yet and the Danes were invading the country, which was made up of lots of different kingdoms. The last kingdom standing was Wessex, which was led by Alfred who later become known as King Alfred the Great and who united all the other kingdoms to fight off the invaders thus creating England.

You play the character Uhtred of Bebbanburg. What do we need to know about him?

Well also at the time there was a huge religious conflict between the Christian faith, which was new at the time but had already been adopted by the Saxons, and the Vikings who worshipped Norse Gods. Uhtred was born to a Saxon elderman who gets killed and the murderer of his father takes the little boy in. Instead of killing him he makes him his slave at first but little-by-little the boy becomes part of the family and learns to love the Danish ways of life. He grows up with that creed. Later on when his second family is killed off, he realises that he’s going to have to stick with the Saxons to pursue his objectives. He’s constantly in a conflict between both religions, both people and his allegiances.

The show is full of story and so richly layered. What is it like for you as an actor to have such a meaty story to work with?

It’s really a godsend to honest. It’s a great part to play not only because he’s a hero in the classical terms of the word and there’s the horse riding and the sword fighting. Also because of the flaws he has. He is flawed and he can be an arsehole at times. He’s a very cheeky character to play and those are the best moments really.

Part of the focus of the show is the growing relationship between Uhtred and Brida. You have fantastic chemistry with Emily Cox who plays Brida. What did you do to work on that chemistry?

We really hit it off from the moment we met. We actually did the screen test together before we were cast for the show and there wasn’t much work to do. She’s such a lovely girl and a brilliant actress, always in the moment and always ready to improvise and try new things. It was like rolling off a log really.

The cast is full of great actors such as Matthew Macfadyen and Rutger Hauer. What was it like to amongst such respected actors like that?

Oh very inspiring and very supportive. When you work with people who are so supportive and know their craft that well you feel like you can try out anything and they’ll have your back. That’s a great feeling to have and it lets you go much further and explore much further as an actor.

The Last Kingdom is based on the Bernard Cornwell novels. How much research did you do before playing the character?

For me the research is really an essential part of character building and one of my favourite parts. It’s quite often hard to find the right sources for the material but here it had all been written for me brilliantly by Bernard. That gave me the base for my character and I lived in his shoes as much as possible before the shoot. I’m so grateful for the books not only for the research but also because they are such a joy to read.

Bernard Cornwell is such a popular and respected writer. Did you feel pressure stepping into one of his characters?

I didn’t feel the pressure until the UK press release and Bernard was attending. He hadn’t seen any of the show yet and was very hands off with the project; he just trusted us to get it right. I was incredibly nervous when I knew he was going to watch it for the first time because he’s the one person I didn’t want to disappoint. He loved it, which was a huge relief and very encouraging.

Do you have any other projects in the pipeline at the moment?

No. Right now we’re just about to get an answer from the BBC if we’re going to get a second season or not. That’s a determining factor of where I can go from here and how much time I’m going to have on my hands.

Are you hopeful for a renewal?

Why should people pick up a copy of The Last Kingdom on Blu-ray or DVD for Christmas?

The Last Kingdom Series 1 is available on Blu-ray and DVD now, courtesy of Universal Pictures (UK).