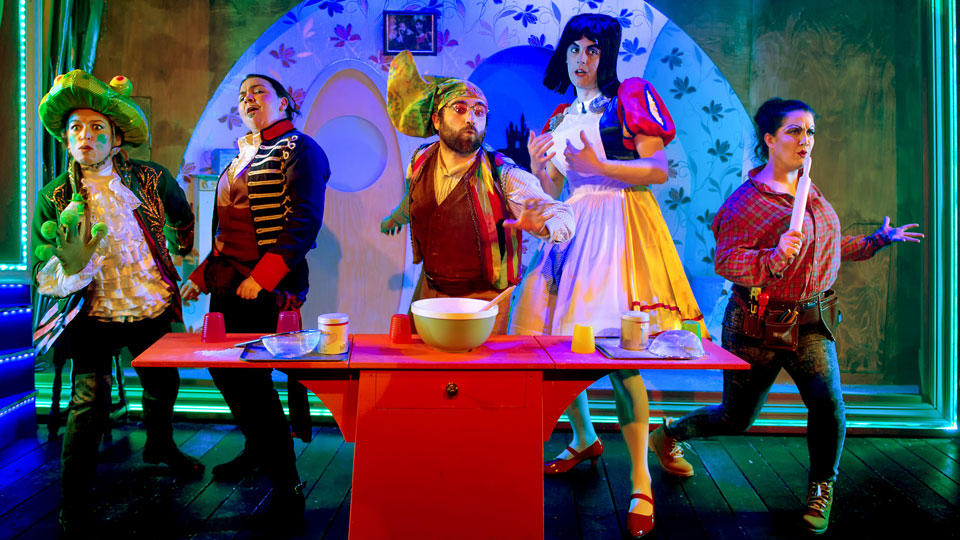 Well, it’s that time of year again, and for those big kids amongst us who miss the unadulterated, zero-inhibitions pleasure of pantomime, you can relive your childhood nostalgia at the King’s Head Theatre, with Mirror Mirror, a panto for adults.

As you’ll probably determine from the title, Mirror Mirror is based on the Snow White fairytale, but Charles Court Opera, the company behind this production, have to stay the right side of copyright law, and there’s a delicious dig at Disney, who claim ownership of the dwarves’ names – thus you’ll find they’ve been afforded new sobriquets here.

You may well wonder what is the point of a panto for adults? After all the kids’ entertainment is traditionally riddled with saucy innuendo and winks at the audience that sail above the children’s heads. This production doesn’t push the boundaries very much further, so it’s a question we never fully resolved (avoidance of annoying kids is our best guess) yet Mirror Mirror is such great fun we ended up just going along with whatever it threw at us.

With many years of panto craft already behind them, Charles Court Opera have honed their talents, and it shows, since Mirror Mirror ticks all the right boxes. Young Prince Larry (Amy J Payne) and his valet Harry (Nichola Jolley) arrive looking for a suitable match in marriage. Larry is appalled by the vain, wicked queen (Andrea Tweedale) but likes the innocent young woman Snow White (John Savournin), who is employed by the dwarves (Matthew Kellett). The wicked queen plots to take out Snow White and bag the eligible young prince for herself.

Mirror Mirror throws in great anarchic humour. There’s a celestial appearance by Barry White, and audience participation in which Savournin’s ad-libs prove as funny as the script. Jokes abound that are so terrible you can’t help but laugh, and the multi-talented Savournin (who also directs and plays Snow White) has delivered a script crackling with humour and energy, which he tailors to the strengths of his cast members. The songs (with music played live) add camp verve to the production, with brilliantly-conceived re-written lyrics fitting around classic melodies. Look out especially for a climactic showstopper that merges half a dozen different well-known hits around the same central melody. Brilliant.

Whilst it’s Savournin who holds the piece together, interacting with the audience the most, the actors are all competent in their roles. Matthew Kellett deserves special credit for playing a menagerie of dwarves, and differentiating them through accents as well as personalities, ranging from broad Scots to spaced-out Australian. Nichola Jolley and Amy J Payne are a fun double-act as the prince and his valet, sharing a song together, whilst Andrea Tweedale is suitably boo-hiss as the malicious, meddlesome queen.

There are a few rough edges to the production, but these will be smoothed down during a long run, and panto is just about the only medium of theatre that can turn a slip-up to its advantage. The design work and the lighting aren’t quite in harmony – it’s a touch too floodlit for such a small set that forces the majority of the action downstage – but the bravura of the performances and the wit and warmth distract from any misgivings. Mirror Mirror is terrific fun, and undoubtedly a fine festive treat.