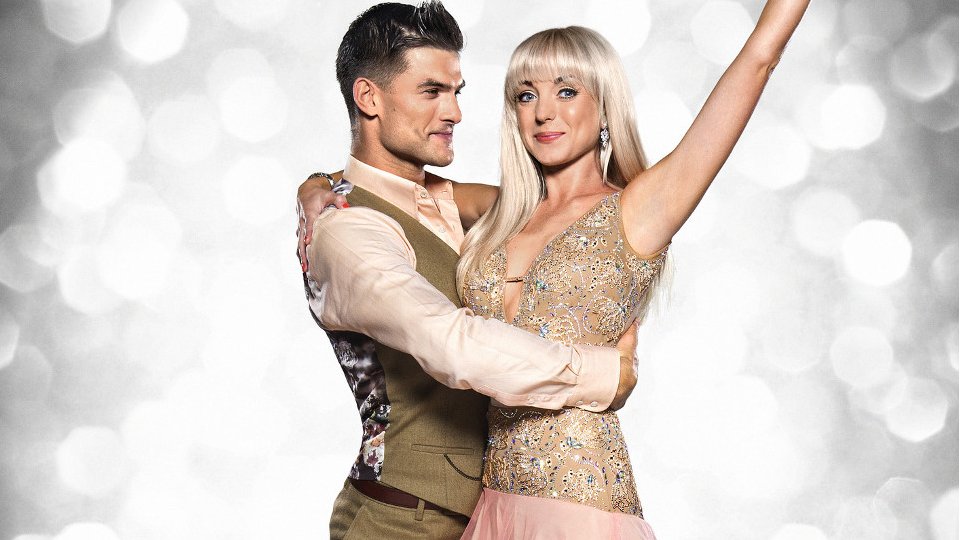 Last weekend Strictly Come Dancing broadcast its annual trip to the seaside with a live show from Blackpool’s Tower Ballroom.

The results show saw singer Jamelia and her partner Tristan MacManus leave the competition after losing the dance-off to Peter Andre and Janette Manrara. Tonight the remaining 7 couples danced to secure their place in next week’s quarter final with Tess Daly and Claudia Winkleman running the proceedings.

Judges Craig Revel-Horwood, Darcey Bussell, Bruno Tonioli and Len Goodman were on hand to offer their advice and critique to all the couples following their performances.

How did everyone get on tonight? Keep reading to find out.

Kellie and her partner Kevin managed to avoid the dance-off last week after getting through to week 10 on the public vote. During training Kellie rehearsed some daring lifts and hoped to be able to pull them off during the performance tonight. Kellie and Kevin danced the Salsa. Did they wow the audience?

The dance: It was a fun dance and Kellie was beaming throughout. The chemistry she has with Kevin is amazing and we always enjoy watching them perform. Well done!

Katie Derham is still yo-yoing up and down the leaderboard and her lack of consistency could prove to be her downfall this weekend. Last week Katie had another strong week but could she keep it up tonight? During the week Katie trained hard for the Argentine Tango to ensure she kept her place in the competition. Did she do enough?

The dance: It was a solid effort from Katie tonight. She really is in her element when Anton is in control and this routine serves her well. I think she might be going this weekend though.

The comments: Bruno said that Katie was drop dead gorgeous and likened her to a courtesan. Craig told Katie that she needs to bound off Anton more but admitted he liked the performance. Darcey said that Katie is very beautiful and told her that the improvement she has made is commendable. Len said that Katie did a fantastic dance but told her that it lacked a bit of authentic atmosphere.

Helen George got very emotional last week when she felt she hadn’t danced as well as she could have done. In training this week Aljaz told Helen that they had a lot of work to do to make sure that the routine was perfect for tonight. Tonight Helen and Aljaz danced the Viennese Waltz. Did they blow the judges away?

The dance: That looked beautiful but there’s something about Helen that just isn’t clicking with me. Technically it looked very strong but I just don’t think she’s as memorable as the other contestants.

The comments: Craig said that Helen was much better this week and commended the storytelling. Darcey said that Helen was a treasure to watch and commented on the details of the routine. Len said ‘tickle my bum and call me Donald’ before saying ‘it was a match made in heaven’. Bruno said that everything came together perfectly and told Helen that this was her breakthrough dance.

The Wanted star Jay McGuiness was back on the up last week after a strong performance. He’s had trouble with consistency throughout the competition and has been criticised for showing a lack of emotion. Tonight Jay and his partner Aliona danced the Tango. Did they do enough to continue Jay’s winning streak?

The dance: Jay did a good job of leading Aliona throughout the routine and he was fairly strong. He still isn’t showing much emotion through his face though which could go against him again this week.

The comments: Darcey struggled to get her words out telling Jay that he and Aliona worked as one. Len said that Jay missed a couple of heel leads and told Jay that he danced like a chess master. Bruno said that Jay was compelling and told him he has the ability to split the musical beat in the centre. Craig said that he absolutely adored the performance.

Peter Andre was in the bottom two last week and almost left the competition. He was at the bottom of the leaderboard after failing to impress the judges. Tonight Peter and his partner Janette Manrara danced the Foxtrot American Smooth. During rehearsals Peter struggled with the routine and his confidence. Did he pull it together on the night?

The dance: I’m not sure that Peter has done enough tonight to stay out of the bottom two. There were a few mistakes in the routine and it was a little dull in places. I really hope I’m wrong as I want Peter to get to the finals.

The comments: Len said that he enjoys watching Peter and Janette dance. Bruno said that Peter maintained smoothness throughout but told him he got too over excited. Craig said that he would like to have seen longer lines but told Peter he loved his performance skills. Darcey said that Peter was better this week and she could see that he had worked hard.

Anita Rani was completely robbed last week and she should have got the first 40 of the series for her routine. During training Anita and Gleb struggled to learn their Rumba this week as Anita felt very uncomfortable. Did she manage to embrace the dance?

The dance: That was stunning! Anita was so graceful and tender, and Gleb’s choreography was outstanding. That’s what I call a Rumba!

Georgia May Foote has topped the leaderboard for the last two weeks so the pressure is on for her to keep up the high standard. During the week Georgia struggled to get the fire in her movement and channel her anger in the routine. Tonight they danced the Paso Doble. Was it another leaderboard topper?

The dance: Another brilliant week for Georgia and Giovanni! These two are absolutely unstoppable and I think they could win the whole series. Great performance!

The comments: Craig said it was fantastic. Darcey said there was plenty of drama and energy but told Georgia not to take too much power in the shoulders. Len said that he thought there was too much dress wafting and said it was too aggressive in places. Bruno said that Georgia was a pocket rocket.

Strictly Come Dancing 2015 continues tomorrow night at 7.20pm on BBC One. See all of the couples in rehearsals earlier today in our gallery below: