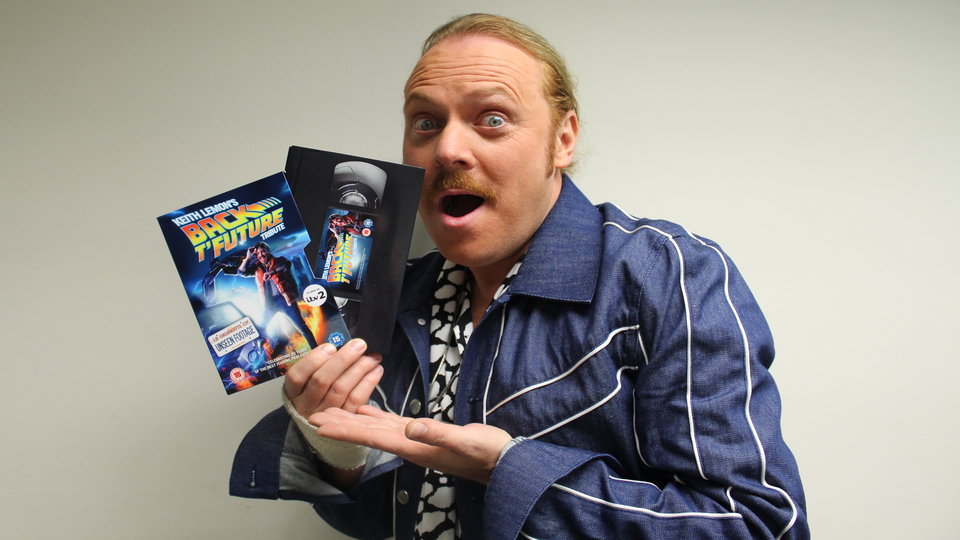 Thirty years after Marty McFly stepped into the DeLorean, Back to the Future’s biggest fan, Keith Lemon, presents his very own celebratory homage, Keith Lemon’s Back T’Future Tribute, a fun-packed 90-minute documentary and bonus material, out on DVD and Digital HD now.

With the help of some of his celebrity friends, Keith has remade some of his favourite Back to the Future scenes, with Paddy McGuiness playing Biff, Gino D’Acampo taking on the role of Doc and McBusted performing the film’s iconic song, ‘Johnny B. Goode’. Whilst celebrity admirers of Back to the Future who add their own recollections of the famous trilogy include Jonathan Ross, Davina MCall, Johnny Vegas, Holly Willoughby and Fearne Cotton.

Keith also heads off on a transatlantic pilgrimage to visit the film’s iconic locations and meets some of the original cast and crew, including co-creator Bob Gale. He hangs out with the film’s biggest fans, real-life time travel boffins and shows off his skateboarding skills.

An absolute must-have collector’s item for Keith Lemon lovers and Back to the Future fans, Keith Lemon’s Back T’Future Tribute features a host of unseen bonus material including outtakes, extended interviews, Keith Lemon’s video diary plus a look at hoverboards and other stuff.

“Never did I fink 30 years ago I’d be doing a ‘docu-com’ about 30 years of Back t’ Future. It’s well documented that I’m a massive BTTF fan but I’m not well documented for mecking documentaries. I’m very excited. I feel like a geeky 40-year-old virgin, accept I’m not 40 and I’ve had loads of sex. Let’s get that flux capacitor fluxing!”

Great Scott! That’s not all – the DeLorean time machine has been revved-up to 1.21 Gigawatts and hot off the press is the first official glimpse of the VHS video packaging for Keith Lemon’s Back T’Future Tribute DVD.

“Keith Lemon commented: They released me Back T’Future Tribute on DVD, but imagine if it was 30 years ago! It’d have come out on VHS! I’d love a copy of it on VHS just as a souvenir of the golden years before I’d discovered ladies magical zones!”

Keith Lemon’s Back T’Future Tribute helped break ratings records when the documentary aired on ITV2 recently as part of its Back to the Future celebrations, with the channel achieving its best day ever since it launched in 1998. The 90-minute documentary drew 1.2 million viewers making it the channel’s biggest commission of the year bar Britain’s Got More Talent.

To be in with a chance of winning one of 3 limited edition, unavailable to buy VHS packaged DVD copies of Keith Lemon’s Back T’Future Tribute, just answer the question below.

Advertisement. Scroll to continue reading.
In this article:Back to the Future, Competition, Keith Lemon, Keith Lemon’s Back T’Future Tribute