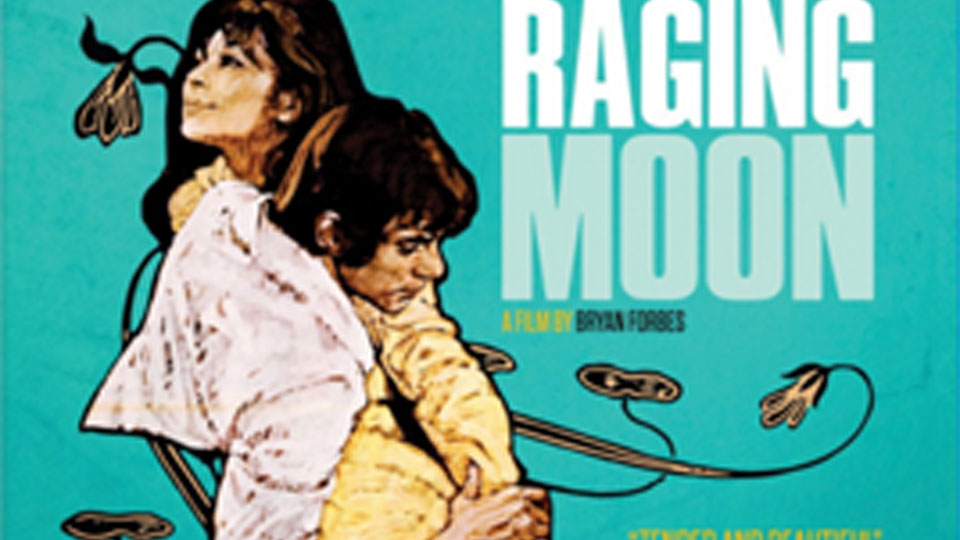 The Raging Moon came very early in Malcolm McDowell’s career, before the role in Stanley Kubrick’s A Clockwork Orange that ensured his cinematic notoreity and immortality. This beautiful film – a realistic depiction of a previously fit, healthy young man coming to terms with life in a wheelchair, on the face of it seems a million miles from the anti-hero of Kubrick’s ultra-violent ode to Burgess. Yet Kubrick cast McDowell on the strength of his lead performance in Lindsay Anderson’s “….if” – and it seems that Bryan Forbes, the adapter and director of The Raging moon – did exactly the same.

It’s easy to see the qualities McDowell possesses that led both directors to cast him after the success of “….if”, in which he led a violent revolution against the oppresive regime in a public school for boys. Bruce Pritchard, whom he plays in The Raging Moon, may not be as overtly insurgent or violent as his parts in the Anderson and Kubrick pictures, but he possesses the same burning intensity and refusal to bow down to petty rules and authority. The insubordination he leads in this movie may be more subtle, but it’s no less impressive.

For the first twenty minutes or so of The Raging Moon, it’s hard to see where the story is going. It unfolds at a leisurely pace, establishing character rather than story. McDowell’s Bruce is charming, handsome and cocky. He plays football and tries his luck with the ladies. He’s a bit of a jack the lad. After an evening enjoying his status as best man at his square, virginal brother’s wedding, Bruce collapses… A diagnosis of polio follows, plus the surety that he will spend the rest of his life in a wheelchair. Bruce moves into a home run by the church, where he meets fellow inmate Jill Matthews (Nanette Newman), but she seems refined, and besides which, she’s engaged to be married.

The late, great Bryan Forbes is the artistic driving force behind The Raging Moon (itself a reference to Dylan Thomas’ In My Craft or Sullen Art). A Renaissance Man, Forbes controversially directed the movie even though he was head of the production company at the time – and he cast his wife Nanette Newman as the lead actress. So it’s reasonable to assume The Raging Moon must be a compromised mess. As it happens, it’s a beautiful, poignant and truthful movie. Forbes’ production, bravely for 1971, is extremely critical of religion, and exposes the hypocrisy of the do-gooders who condescend to the disabled. Geoffrey Bayldon (Catweazle) and John Savident (Coronation Street) have small roles as smug, pompous Christians, who patronise the wheelchair-bound inhabitants of the home in order to feel good about themselves. Few films at the time were quite so scathing about religion as The Raging Moon, and it’s all the more powerful for its honesty. There is a brilliantly funny scene built around a fund-raising event that the inmates are forced to attend.

Another celebrated talent, writer Shelagh Delaney, is a key to the movie’s success. The scribe best-remembered for A Taste Of Honey was well-known for her intense, truthful dialogue, and the cast of characters she creates for The Raging Moon, from the families of the two lovers to their fellow residents in the home, are richly-drawn and rewardingly played with attention to detail by everybody from writer to director and actor. There are amusing performances from Bernard Lee (M in the early James Bond movies) at the wedding scene, whilst Jack Woolgar and Patsy Smart make the most of their supporting roles as McDowell’s parents.

Although some aspects of the film have dated in the four and a half decades since it was committed to film, it stands as a testament to one of the great triumphs of humanity and the scientific method: preventative medicine. It is incredible to think that in only a few generations since the movie was made, polio in the west has been more or less consigned to the history books, thanks to the hugely successful vaccination programme in children. Whilst spinal injuries continue to account for paraplegia, viruses have largely been contained.

It’s a scandal that this thought-provoking, heart string-pulling movie was largely overlooked at the time. Brian Clark’s story Whose Life Is It Anyway, which detailed the right-to-die case of a tetraplegic, probably resonated stronger in the cultural Zeitgeist when it appeared on television and on stage a year or two after The Raging Moon, and Malcolm McDowell went on to be far better remembered for other movies. Yet this overlooked, low budget piece is masterful, and well worth any thinking viewer’s attention.

The film looks crisp, clean and immediately beautiful on restored high definition, and as well as the feature, there are a few extra features that are well worth a look. Star Malcolm McDowell talks at length about the movie from his Hollywood home. Even now, it remains a part of his career he’s proud of, and as he states, his ears always prick up whenever he hears anyone mention it. Nanette Newman also talks about the movie in a recently-recorded interview (made some time after Bryan Forbes’ death in 2013). A trailer and gallery also supplement the extras.