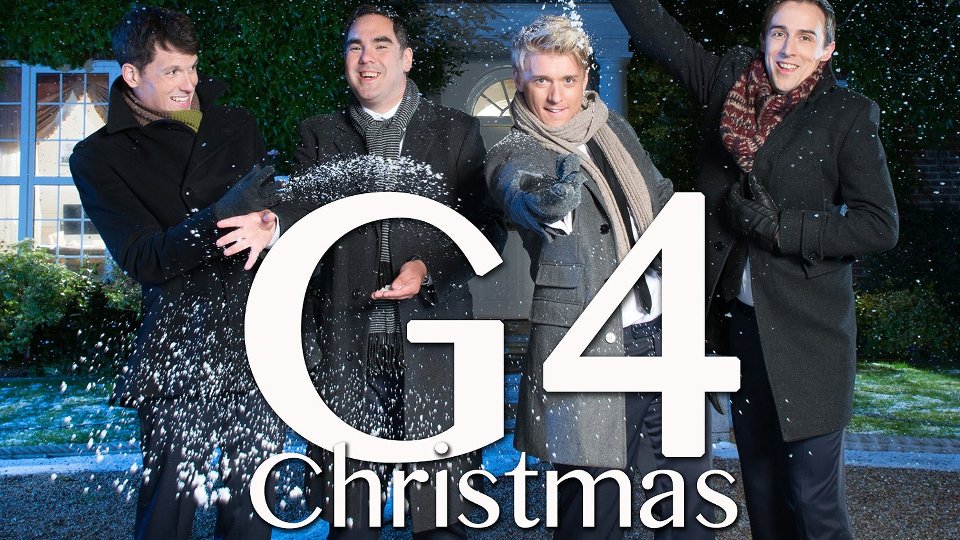 G4 rose to fame through the first series of The X Factor in 2004 where they were runners-up to Steve Brookstein. In 2005 the band released its debut self-titled album, which sold over 600,000 copies in the UK alone. It easily outsold Brookstein’s effort and G4 went on to enjoy success with two more studio albums and numerous headline tours. After deciding to split up in 2007, it seemed like a reunion for the band would never happen but much to the delight of fans, the foursome got back together in 2014 with new member Nick Ashby replacing former member Matthew Stiff. After a series of live shows following their return, the group has recorded their first album in nearly a decade with G4 Christmas.

G4 Christmas is a collection of well-known festive songs that opens with O Holy Night. As soon as the album kicks off, you’re reminded of why you loved G4 the first time around. Their strong vocals combine for soaring beautiful harmonies that really add something to everything they lend their voices to. Jonathan Ansell resumes lead throughout many of the songs, and his voice is as strong and powerful as it ever was.

Over the album’s 11 tracks G4 cover a lot of ground from the more traditional (Panis Angelicus) to the contemporary (All I Want For Christmas Is You) and everything in between. Les Miserables favourite Bring Him Home may seem an odd addition to the album but it works really well and was a favourite on their tour earlier this year. Elsewhere on the record the medley of Let It Snow/White Christmas/Rudolph The Red Nosed Reindeer/I Saw Mommy Kissing Santa Claus is one of the finest moments here playing to each of the members’ vocal strengths.

For those who like G4 when they’re at their most classical Good King Wenceslas is a real treat as is their beautiful version of Amazing Grace. The album comes to a close with an a cappella version of Silent Night that sounds absolutely stunning.

The best moments on G4 Christmas come when the four members bring their vocals together. Mike Christie’s baritone, Ben Thapa’s low tenor and Nick Ashby’s bass work well with Ansell’s high tenor and their harmonies really are out of this world. When we saw them on tour earlier in the year we commented how well Ashby had fit into the line-up and his bass adds a lot of depth to the songs on this collection.

G4 Christmas is a welcome return to recording for G4. They remain one of the best acts to come out of The X Factor and they are genuinely incredibly singers. I hope that this new record is the first of many because they truly do have a magic that happens when the four guys sing together. If you like your Christmas music traditional and well-sung then look no further than this collection of festive gems.