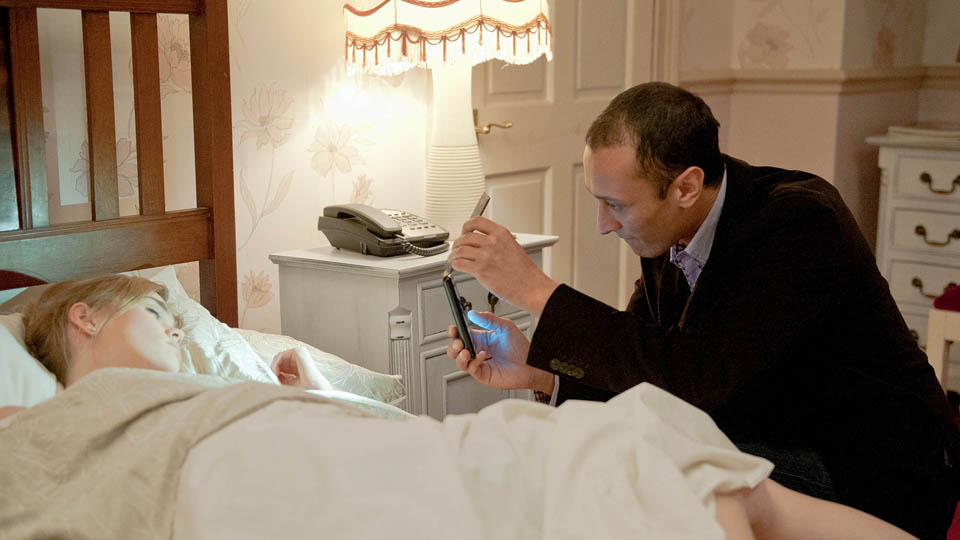 Isn’t it nice to have Nicola back and feisty as ever?  I’m not sure that Lawrence is that pleased to have her as a new house guest!  Let’s take a look at what is going on this coming week in Emmerdale.

Megan plans to leave the village as soon as possible, now that Nikhil knows she’s still pregnant with Jai’s baby.  She also told Nikhil a few home truths about his beloved older brother and he questions Jai about what happened with Charity.  Jai is fuming that Megan has blabbed and when Nikhil’s girlfriend Tanya tells Jai that they will be staying a while longer in the village he comes up with a plan to get rid of the pair.

First, he spikes Tanya’s drink as he starts to put his plan in motion.  Next, he takes her to the B&B where she falls on the bed zonked out.  He wastes no time in taking her phone and sending a message to Nikhil as if from Tanya.  When Tanya awakes she’s confused to see Jai beside her and is traumatised when she believes she’s cheated on Nikhil.  Jai uses this to blackmail her by threatening to show Nikhil photos from last night unless she convinces him to leave the country.

It seems his plan has worked as Tanya and Nikhil say their goodbyes, but as they prepare to leave Nikhil announces to Tanya that he has some life changing news to tell Jai.  Will he go through with telling Jai about Megan or will Nikhil find out about Jai’s blackmailing first?

Ashley is diagnosed with dementia

Ashley seems distracted in a meeting to discuss the Village Hall and Harriet can’t help but notice how much he’s focusing on Laurel rather than her.  When Edna asks Ashley to bank the takings, he gets distracted and leaves them in a drawer instead.

He’s been using a notebook to help with his fading memory, but when he mislays it, he is lost as to what he did with the takings.  Fingers are soon pointed at Bob who is devastated that people would think that of him.  When Bob finds Ashley’s notebook he confronts him and is stunned by what Ashley confides and decides that he needs to be supportive of his friend.  He accompanies him to his hospital appointment where Ashley learns that he has Early Onset Vascular Dementia.

A distraught Ashley faces a bleak future and despite Bob encouraging him to tell Harriet, a good time doesn’t seem to present itself.  Harriet doesn’t help the situation with a poorly timed comment.  As Ashley tries once again to tell her, he bottles out and instead tries to push her away by saying that they should split up leaving her hurt and confused.  Will Bob be able to stand by and not tell Harriet the truth?

When Vanessa shows Rhona her baby photos, she becomes even more broody.  Paddy tries to put her off, suggesting that another pregnancy might not be a good idea and is taken aback when she says that they should adopt instead.  As Rhona turns to Vanessa for support and encouragement, Paddy talks to Tess about his concerns and is surprised when she moves in for a kiss.  Will he reciprocate?

Later, Paddy is relieved when Rhona tells him that Tess will no longer be Leo’s teaching assistant.  He goes to see Tess and she explains that she can’t teach Leo and have a fling with him at the same time.  Neither realise that Rhona is within earshot;  has she overheard?

Full of guilt, Paddy suddenly has a change of heart on adoption, but isn’t fooling Aaron who can sense he’s not really into the idea.  Paddy tells Tess that she shouldn’t resign as Leo’s teaching assistant and insists the pair delete each other’s phone numbers to stop them being tempted.

Zak and Joanie team up to encourage Cain to spend some time with Kyle.  Could it be that he actual enjoys looking after his son?

Robert is left gutted when Aaron tells him he wants nothing more to do with him.

Laurel moves in with Jimmy on Nicola’s instruction.

Kerry has a health scare when she seemingly goes blind.

Bernice offers to sign a pre-nup as Lawrence worries the lack of physical intimacy is going to be more of a problem than he’d hoped.