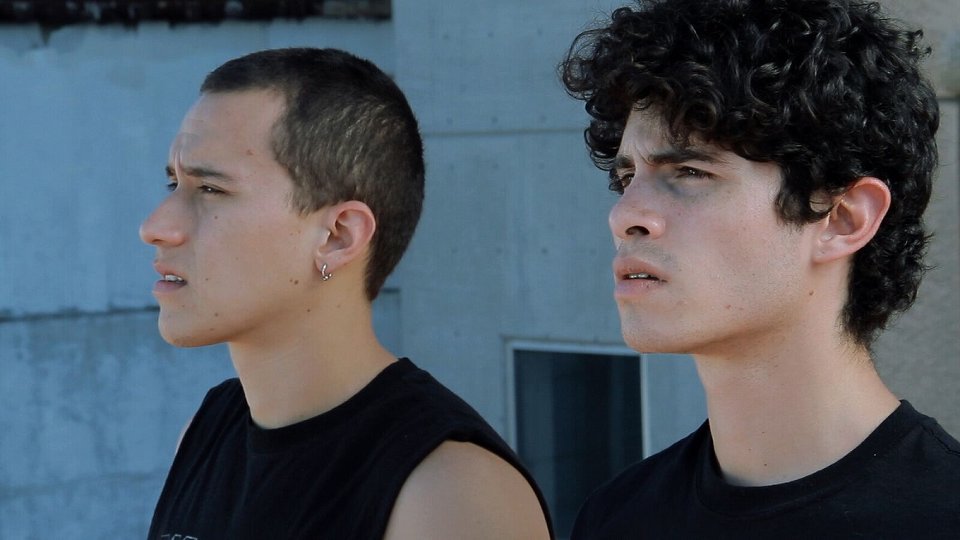 Best friends Alex (Pablo Mezz) and Diego (Carlos Hendrick Huber) spend an afternoon together as the world is on the verge of the apocalypse. Alex is gay and has been seeing a man he likes but he can’t bring himself to have sex with due to trust and intimacy issues. Determined to get over the issue, Alex asks his straight friend Diego to have sex with him believing that they have enough trust with one another to be able to go through with the deed. Of course Diego doesn’t respond well to begin with but as the film progresses he starts to seriously consider coming through for his friend. Will he agree to Alex’s request?

Velociraptor is the latest film from writer/director Chucho E. Quintero, who has taken an almost documentary-like approach to the filming of the movie. It feels as if the events are unfolding in real-time as Alex and Diego back and forth over Alex’s proposition. The film explores the depths of friendship between two men with different sexual preferences and is a ponderous piece about decisions you’d make if the world were going to end tomorrow.

The premise of Velociraptor is interesting but you do have to wonder if having sex is really the one thing you’d want to achieve if the world was facing an imminent apocalypse. For Alex though that is the case and it’s understandable why he’s sexually attracted to Diego. You have to ask if Alex hasn’t had sex with his other partners because of his feelings for Diego or if he genuinely does has trust and intimacy issues. The answers aren’t very forthcoming in the movie instead leaving you to make up your own mind.

Similarly Diego’s motivation for potentially indulging his friend’s request isn’t all that clear. Why would a man who identifies as straight even entertain crossing the line with a friend who is of the same sex and clearly harbouring non-platonic feelings? Could it be that Diego himself has issues around his sexuality that need addressing or is he just that good of a friend?

Pablo Mezz and Carlos Hendrick Huber do the best they can with underwritten characters. Both are very two-dimensional giving the actors very little to work with. They at least manage to create a convincing buddy chemistry that does help the film chug along.

For us Velociraptor is just that bit too ponderous and it wanders around for a while without really ever getting anywhere. The pay off isn’t as satisfying as you hope and the whole film feels more like a tease than a fully-fleshed out story. Velociraptor is certainly an interesting idea but it sadly isn’t the film we hoped it would be based on its premise.

Watch the trailer for Velociraptor below: