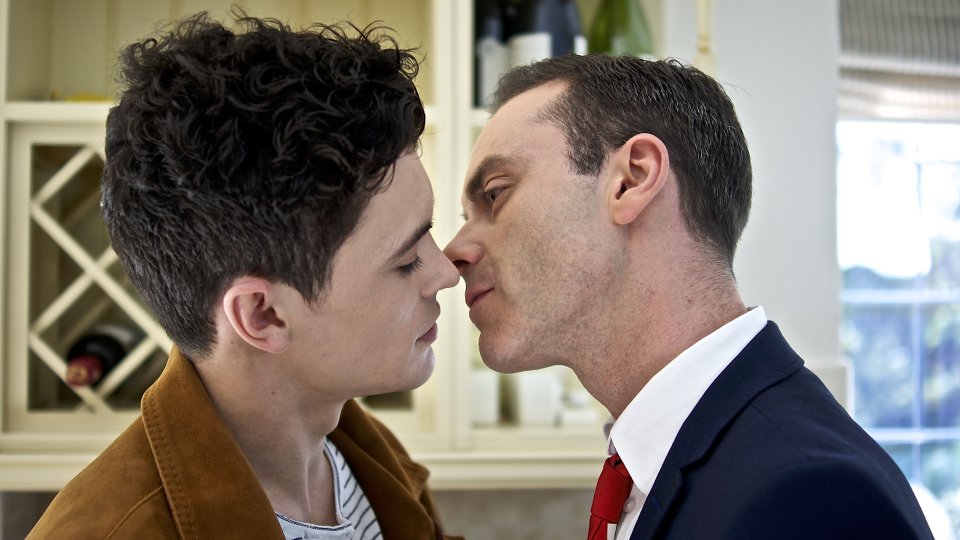 Dancer David (Jonny Labey) is offered a place at a dance school to further his training but is hesitant to accept due to his feelings for Jules (Daniel Brocklebank), a married man. To make things more complicated Jules is married to David’s sister Jane with whom he has a child. When Jules doesn’t share David’s enthusiasm about his opportunity, David starts to realise that their relationship is going nowhere and as a rebound he hooks up with Sam (Craig Stein) in a nightclub. As David starts to get serious with Sam, Jules starts to lose grip on his secret lashing out at his wife in the process. Will David move on or will he be drawn back to Jules?

Soft Lad is the directorial debut of Leon Lopez, best-known for his role on Brookside, who also wrote the movie. At its heart Soft Lad is a coming-of-age family drama with a love triangle at the centre. David continues a relationship with his brother-in-law with little regard for his sister and against the advice of his friend Stacey (Laura Ainsworth). As he pushes Jules to commit to him the relationship grinds to a halt ending with an explosive argument that drives a wedge between them and pushes David into Sam’s arms. David’s burgeoning relationship with Sam takes him by surprise but he can’t escape his feelings for Jules.

Lopez crafts a familiar story that packs an emotional punch and explores love and betrayal within a family. The inevitable third act is one of the strongest parts of the film and there are a few surprises taking the film into unexpected territory. It suddenly shifts gears from a soapy drama into something altogether more powerful.

The performances of Soft Lad’s three leads are what makes the film. Daniel Brocklebank plays Jules with a confident arrogance that disguises his real sexuality while Jonny Labey is a revelation as David. Former Brookside star Suzanne Collins brings Jane’s emotional struggle to the surface and she’s the character you sympathise with the most out of the three of them. All three actors have a great chemistry and they work really well together on-screen.

Soft Lad isn’t a perfect film but for a debut it’s pretty damn impressive. Leon Lopez has created a film that will strike a chord with its core audience and we’re sure some will be able to relate to the material. Soft Lad isn’t always an easy watch but it’s an interesting and emotional ride. We can’t wait to see what Lopez comes up with for his next movie as he shows a lot of promise here.