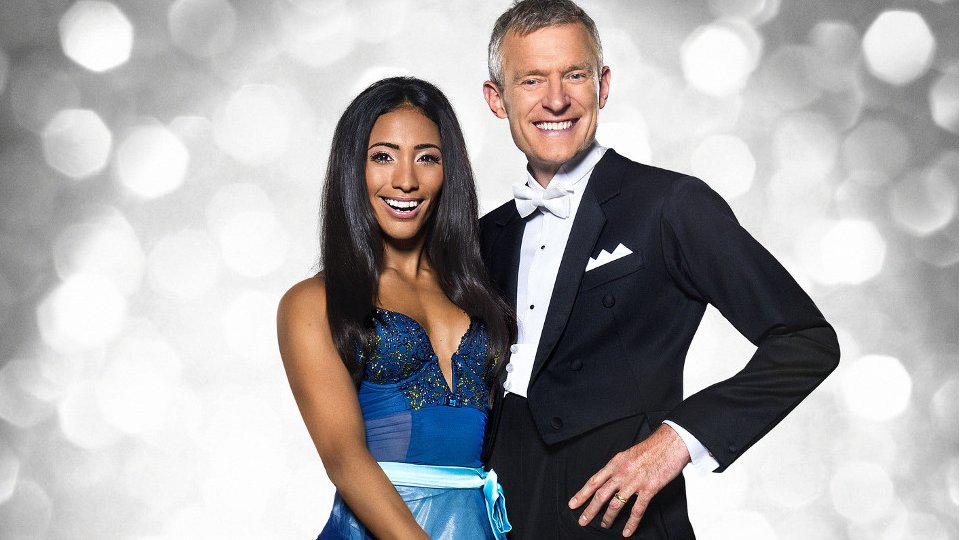 Strictly Come Dancing 2015 continued tonight as the remaining 9 couples battled it out to keep their place in the competition so they would be going to Blackpool next week.

Last weekend weather presenter Carol Kirkwood and her partner Pasha Kovalev finally left the competition after losing the dance-off to Kellie Bright and Kevin Clifton. Tonight the pressure was on as the couples knew that any of them could be leaving during tomorrow night’s results show.

Tess Daly and Claudia Winkleman kept an eye on proceedings as usual with Craig Revel-Horwood, Darcey Bussell, Bruno Tonioli and Len Goodman on hand to offer their critique.

How did all of the couples get on? Keep reading to find out…

Countryfile presenter Anita Rani had a fantastic week last week with her Jive. She admitted in her VT that pro partner Gleb Savchenko has been pushing her really hard and bringing out the best in her ability. This weekend Anita and Gleb danced the Quickstep. Was it another stellar week for the couple?

The dance: What a start to the show! Anita and Gleb never fail to deliver and that was a wonderful Quickstep. There was a lot of bounce action going on there and they made it look pretty easy didn’t they?

The comments: Len said that Anita has become a great all-rounder and told her that it was ‘fast and clean’ but told her the footwork could have been a little cleaner. Bruno said that Blackpool was calling Anita’s name and told her that it was ‘a lovely Saturday afternoon in the park with Gleb’. Craig criticised some of Anita’s footwork but commended her ‘excellent’ timing throughout. Darcey said it was ‘wonderful’ how consistent Anita is but told her to think about each step to further improve her footwork.

The Wanted star Jay McGuiness was criticised for his lack of facial expressions and emotions. Since his Jive he’s really struggled to match that level of performance but he said in his VT that he was determined to improve. During the week Aliona invited some teachers and students from the Royal Academy of Dance to watch them rehearse so they could get feedback. Tonight Jay and Aliona danced the Foxtrot.

The dance: Well we’re not 100% convinced that Jay conveyed the emotion any different to other weeks but we did see a few smirks. At the end of the routine Jay was heard apologising to Aliona but if they made a mistake we didn’t see it. The dance was really great and one of Jay’s best for a while.

The comments: Bruno said that Jay has ‘exquisitely lyrical arms’ but pointed out the mistake. Craig said that the performance was ‘bland’ and told Jay that when he got into the dance his face went dead. Darcey disagreed with Craig and said that Jay really told a story with his moves. Len said Jay did a ‘beautiful, poignant Foxtrot’ and told him it was a fantastic performance until he tripped.

Singer and TV presenter Jamelia managed to stay out of the bottom two last week after having been in the dance-off three times. During the week Jamelia took Tristan to the Loose Women studios where she asked him to make an appearance. Tonight Jamelia and Tristan danced the Samba. Did they get their groove back?

The dance: It wasn’t the liveliest Samba we’ve ever seen but Jamelia clearly gave her all. We think it could have been her best dance so far this series. At least she looked like she was enjoying herself!

The comments: Bruno said that Jamelia had him ‘shaken and stirred’ but told her to be careful with her energy as it made her performance a little wild. Craig said that her hands were unattractive and offered lots of other pointers. Darcey said that she liked Jamelia’s isolations and told her that the performance told a lovely story. Len said that the gyrating was excellent but told her she lost some of the hip action during the performance.

Helen George did a stunning Rumba last week but Head Judge Len wasn’t impressed with the routine. In her intro VT Helen admitted that she was upset by Len’s comments but it gave her determination to improve this week. Tonight Helen and her partner Aljaz Skorjanec performed the Tango. Was Len happier this week?

The dance: What a stunning performance from Helen and Aljaz this week. That was a classy, fast and beautiful routine. Helen is really playing to her strengths at the moment and that was a very good effort.

The comments: Darcey said that the choreography was beautiful and told Helen that the drama was perfection. Len said there was ‘loads of content’ this week and told Helen it was a great Tango. Bruno said it was ‘a beautifully tailored, high fashion Tango’. Craig said that Helen needed to be softer in the knee area but told her that the lines were powerful.

Katie Derham has really struggled to get back on top the past few weeks and the judges have given her a tough time. During the week Katie spent some time with her husband who gave her feedback on the dances she’d done so far. Tonight Katie and her partner Anton du Beke danced the Rumba. Did they get their mojo back finally?

The dance: The answer to the question in the last paragraph was a resounding ‘no’. Katie really tried this week but parts of the routine looked messy and we spotted a couple of mistakes. It also lacked fire for a Rumba and was a little bit clinical for our tastes.

The comments: Len said it was ‘fantastic’. Bruno said that Katie looked ‘supremely elegant’ and told her that her performance tonight was a hit. Craig said it was ‘a little melodramatic’ and told Katie it was ‘nearly brilliant’. Darcey said it was ‘one classy love story’ and told Katie she would have liked more eye contact between her and Anton.

EastEnders star Kellie Bright and her partner Kevin Clifton found themselves in the bottom two last weekend and they definitely didn’t deserve to be there. In their intro VT they both admitted that they were worried they might be next to leave the competition. During the week Kevin visited Kellie on the EastEnders set and they watched some footage from shows Kellie did when she was younger. Tonight Kellie and Kevin danced the Samba tonight. Did they do enough to stay out of the bottom two?

The dance: We loved the incorporation of 90s hip-hop moves in that routine. There is no reason at all that they should be anywhere near the bottom two tomorrow night. That is what you call fighting back people!

The comments: Bruno said that the blend of Samba and hip-hop worked well and told Kellie it was ‘very good’. Craig said that the music choice was odd but that he loved the performance. Darcey said that Kellie gives an ‘assured performance’ but said that the mix of styles didn’t work for her. Len said that he’s ‘a cup of tea in a world of skinny lattes’ before saying there’s two things he doesn’t like ‘babies crying and hip-hop’.

Peter Andre fought back last week after criticism that he delivered the same performance every week. He proved to the judges and the public that he can be versatile and he scored an incredible 38 out of 40. During the week Janette invited Peter’s kids to rehearsals so they could watch their father in action. Tonight Peter and Janette danced the Viennese Waltz. Could they top their score from last week?

The dance: What an elegant and classy performance. Peter never fails to deliver and he clearly loved every single moment of that dance. Janette’s choreography was spot on as always and it was another beautiful performance from the pair.

The comments: Craig said that Peter danced it well but told him it was too frenetic for him. Darcey said it flowed with emotion and energy for her and told Peter there were elements that were like a piece of Disney magic happening. Len said the performance wasn’t a 10 and told Peter that it was a little too American Smooth for him. Bruno said it was like watching Cinderella and told Peter it was wonderful and magic.

Despite making a mistake with her Samba last week, Georgia May Foote still got fantastic scores and comments from the judges. In her intro VT the actress expressed disappointment that she didn’t get the routine perfect. During the week Georgia suffered an injury in training when Giovanni kneed her in the head. Thankfully she was OK to carry on and had a visit from legend Ruthie Henshall. Tonight Georgia and Giovanni danced the Charleston.

The comments: Darcey said it was ‘tight, clean, brilliant’ and packed full of content. Len said that Georgia put the ‘go’ in ‘Chicago’ and told her to take a coat to Blackpool. Bruno said he was completely ‘razzle dazzled’ by Georgia’s performance and told her she danced amazingly. Craig said ‘L.U.V.’

Radio presenter Jeremy Vine closed the show tonight and expectations were high after last week’s very interesting Tango. In his intro VT Jeremy admitted that he desperately wants to get to Blackpool and he threw himself into training this week. During the week Jeremy and Karen visited the Crossrail construction to practice their routine. Tonight Jeremy and Karen danced the Quickstep. Did they do enough to book their tickets for the seaside?

The dance: Poor Jeremy! He tries so hard but that Quickstep was more like quick walking in places. We really admire his effort and energy but that routine just didn’t work for us. It could be his week to leave the competition.

The comments: Len said there were a few ‘minor mistakes’ and told Jeremy that he wants him to make it to Blackpool. Bruno said that Jeremy hasn’t quite struck gold but told him that he made a good effort. Craig said it didn’t exactly ‘fly around the ballroom floor’ as he’d hoped. Darcey said it was a bit steady and told Jeremy that he’s light on his feet.

Tune in to BBC One at 7.20pm tomorrow to find out which couple will be leaving the competition. Take a look at all of the couples in the dress rehearsal earlier today in our gallery below: